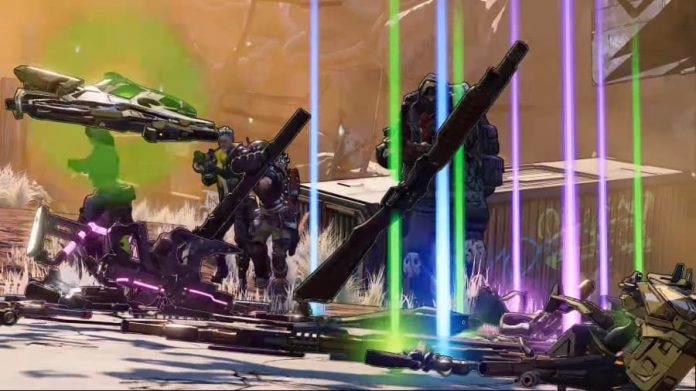 No matter who you play Borderlands with, you’ll always fight over the best loot.

I’ve been playing Borderlands 3 with my dad for the last few weeks and we have come across some pretty bad-ass weapons not only in loot chests and port-a-potties, but also just lying on the ground and falling out of the pockets of our enemies. And so we’re constantly fighting over those awesome shooty sticks.

That’s why I’ve decided to put together a quick list of 15 of some of the coolest guns and grenades that you can get in Borderlands 3. That way you know which ones to snatch up before your friend (or dad) gets the chance to see them.

The Diamond Butt Bomb is a legendary grenade that unfortunately can only be obtained if you purchase the Super Deluxe or Season Pass Edition of the game. That being said, hopefully in the future it will be unlocked for all players to use.

What’s cool about this grenade is that when thrown, a tiny Butt Stallion, Jack’s infamous horse made out of diamonds from Borderlands 2, is released into the battlefield to kick some butt. You can even hear her beautiful neighing.

This lovely pink gun is obtained from Claptrap after completing the “Baby Dancer” quest. This quest can be found when the player gets to be around level 35.

What makes LOV3M4CH1N3 so cool is that not only is it a powerful incendiary weapon, it fires its bullets in a heart-shaped pattern. Nothing says “I love you” like a psycho with heart shaped holes in his chest.

This intelligent shooter is amazing for quite a lot of reasons. Not only does it have eyeballs, which is equal parts creepy and awesome, but it also talks, saying things like, “Yeet”, “Gonna do a big shoot”, and simply “Penis” over and over again.

It also spawns a Gigamind spider turret and has increased elemental damage. YEET!

Ruby’s Wrath is a complicated weapon of intense destruction. If the player fires rockets from the launcher outright, the weapon is completely useless. So first you have to tag an area with a vortex grenade using the gun’s secondary fire. From there, when you shoot the rockets they will home in on the tagged area making it completely devastating.

Although the gun is extremely heavy and causes reduced movement speed it can be worth it for those moments of desperation when you need a lot of damage very quickly.

The Long Musket in Borderlands 3 references the millionaire inventor Elon Musk’s “not a flamethrower.” The musket shoots out flames at a short distance and, upon reload, throws out a gun which grows legs and chases enemies down in a hilarious display of violence.

Unfortunately it’s a random drop so you might not be able to find one on your first playthrough.

This gun isn’t one of the most flashy guns in Borderlands 3 but boy does it pack a punch. This Double-Penetrating: The Boring Gun does 2294×2 damage, has great accuracy and handling, and just simply kicks some serious ass.

Another amazing grenade that you’ll just find by randomly looting is Tina’s Hippity Hopper. This powerful grenade explodes three times after it is thrown which launches two additional grenades out which explode as well causing a huge area of explosion.

This gun is for those of us that just love melting shields like they’re made out of putty. The Storm gun spawns four shock orbs that explode on impact and cause some amazing splash damage to those around it.

The storm original made its debut in Borderlands 2 so it’s a returning beauty this time around.

This gun is obtained if the players decided to kill themselves during the mission “Sellout.” While the gun is equipped the voice of God Queen Tyreen can be heard saying things like “Ha! Sellout” or “Wow, you actually hit something!”

It’s both encouraging and very, very insulting. Much like Tyreen herself.

You’ll find this sleek handgun randomly in a loot drop but it is super worth it. Have you ever wanted to shoot out fireballs just like Mario? The Superball lets you do just that. Its description even includes the phrase, “Flower power” in reference to everyone’s favourite plumber.

And don’t worry, if you can’t hit your target, the fireballs bounce along surfaces. A-wahoo!

Perhaps the greatest gun that you’ll ever find in Borderlands 3 is the Eridian Fabricator. This gun shoots more guns. Yes, you read that right. It shoots out guns. The catch being that it costs 10 eridium per shot, but by the time you get a hold of this gun you’ll have plenty of eridium saved up to use it.

These guns will range from green to purple rarity but there is a chance to receive legendary weapons on occasion.

The Hyper Hydrator is SHOCKINGLY good. It’s a pun you see….you’ll get it in a second.

With this gun you’re able to squirt your enemies with water, get them all soaked, and then shock them into oblivion. Sure, this is something that would be much more impressive if there wasn’t already 8 million other guns that shocked people, but with this you get to spray them with water first. Fun, right?

Perhaps the coolest looking gun on this list is the Moar Dayumned Wizzperer which, let’s be honest, looks like a horrifying alien penis. This gun isn’t particularly high in damage at first but that damage increases the more you fire.

The Stuffed Quadimizer is fun because it switches between a bunch of different types of elemental damage. It’s high in splash damage so whatever element you’re using, you’re going to hit lots of enemies with it.

It also fires four rockets in a horizontal line dealing huge amounts of damage to a large area.

There’s not much to talk about in regards to this weapon. It looks like a big turd and it fires turds. It also causes radiation damage to enemies. Forums have been talking about how immature the humor of Borderlands is, but c’mon. A gun that shoots poop? This is freaking hilarious.

If you’ve got such a stick up your butt that you can’t appreciate a good poop gun then clearly Borderlands isn’t the game for you. Pick up your Porta-Pooper 5000 today folks!