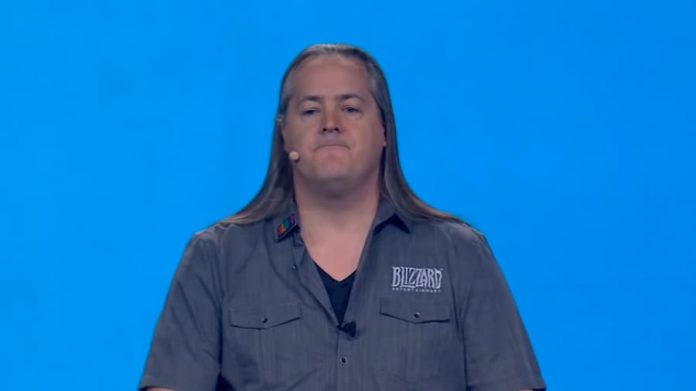 President of Blizzard Entertainment J. Allen Brack opened up BlizzCon 2019 with an apology, but still refuses to reverse the controversial “Blitzchung” ban.

The announcements at this year’s BlizzCon convention certainly stirred up a lot of excitement, but it feels like the big reveals of Overwatch 2 and Diablo IV may be part of a deliberate strategy to distract from Blizzard Entertainment’s recent controversies.

When professional Hearthstone player Chung “Blitzchung” Ng Wai donned a mask during a post-match interview and openly called for Hong Kong’s freedom from the oppressive Chinese government, he was subsequently banned by Blizzard, along with two Taiwanese casters. Many are claiming that this move was made to placate China, which is a lucrative market for the company, and are accusing Blizzard of putting profits before human rights and freedom of expression

President of Blizzard Entertainment J. Allen Brack made a meek apology during the BlizzCon 2019 opening ceremony, in which he didn’t name any names, admit to any specific wrongdoing or declare any intention to reverse the bans; apparently only expressing regret that everyone got so mad at the company rather than any regret for what it did.

“We moved too quickly in our decision, and then, to make matters worse, we were too slow to talk with all of you,” Brack said. “We didn’t live up to the high standards we set for ourselves. We failed in our purpose.”

In an interview with PC Gamer after the event, Brack clarified that the company would indeed not be reversing the decision to ban Ng Wai, which begs the question of why the company would even apologise in the first place. “We want the official broadcasts, which are a small percentage of the overall content that gets created, to be about the games.” Brack says. “And we want those to be focused on the games. Again, it’s not about the content of Blitzchung’s message. It’s about the fact that it was not around the games.”

“Is it fair to say that if Blitzchung had said any political message, it would have incurred the same punishment?” asks PC Gamer.

However just earlier this year there was an official Overwatch League event during pride month to show support for the LGBTQ community; so if Blizzard really does want to keep politics away from official eSports channels, this must have been a very recent development.