Wondering how to complete the missions in Mighty Quest For Epic Loot’s season two week seven? Here’s everything you need to know.

Can you finish Castle 8.5 and remain untouched? Or at least with 75% of your health?

This is what we like: a nice, self-explanatory mission! Head to Act 8, Level 5 and complete the level without losing more than 25% of your health. Using a ranged weapon (i.e. a staff) might help if you’re finding it tricky, and be sure to utilise powerful skills.

Where should we celebrate my anniversary? The last 2 digits of my birth year should tell you where!

It’s Ezio Auditore talking – the protagonist of Assassin’s Creed II. This season of Mighty Quest is all about Assassin’s Creed, remember? Ezio’s birth year is 1459, so you need to head to Act 5, Level 9. Simply completing this with an auto-win will be enough to unlock the reward.

2 Star Fire Gear may seem cheap… But if you loot as many as there are deadly sins, you shall feel lucky.

To unlock this reward, you need to loot seven pieces of Fire equipment. You’ll need to head to Extreme difficulty levels to loot 2-star gear. You can check what potential loot you’ll receive before you start a level – fire gear will be denoted by a red square, and you’ll want to ensure it has 2 stars. Playing through Act 1, Level 2 on Extreme difficulty several times (or auto-winning) should get you the loot you need.

Blend into the Forest. Cross its very entrance with nothing but Nature elements on you.

You need Act 3, Level 1 for this. Ensure all your equipment, including your weapon, is of the Nature element. Simply auto-winning the level will be enough to unlock the reward.

My dear Aquila cannot fly safe at night… Smash those annoying Bats using what a certain god of Thunder would use.

To complete this challenge, you need to kill 125 bats with a hammer (i.e. the weapon that Thor, the God of Thunder uses). You’ll find some bats in Act 3, Castle 9 – but sadly auto-winning the level didn’t count. You’ll need to run through that particular level around 12 times to unlock the reward.

Want to surprise Wendy the Widow? Find a Skilled way to show her not just one but Several Shields!

Wendy the Widow is the boss of Act 3, so you’ll find her in Act 3, Level 10. You’ll need to equip the ‘Protection’ skill in order to complete this challenge. Head to Wendy the Widow’s level and simply activate the skill before you kill her.

Castle 4-9 is full of these self-destructing Roaches. Care to make 15 of them blow up in less than 5 seconds?

Those exploding bugs are a pain in the butt, but getting 15 of them at once shouldn’t be too tricky. Thankfully, they like to follow you. Don’t stand still long enough to let them blow up until you’ve got a big enough group following you. As soon as you stop moving, they’ll activate their self-destruction. You may have to try a few times before you get enough – good luck.

Can You Promote Runes in Mighty Quest for Epic Loot?

Where to Find Skavens in Mighty Quest for Epic Loot 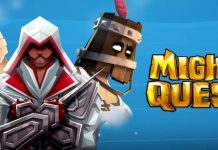