The next generation of Pokémon is here – and whether you’re a pocket monster stalwart or new to the series, there’s plenty to like.

This time, the action takes place in the region of Galar, a vast world filled with rolling countryside, chocolate-box villages, Victorian-era factories and modern metropolises. It’s basically the United Kingdom, miniaturised, cartoonified, and with all the worst bits taken out.

Pokémon Sword‘s British-inspired setting is, for the most part, charming – although if you’re a resident of the UK yourself you might find yourself rolling your eyes at some of the references. Most grating is the uncomfortable dialogue perpetuated by the game’s cast of merry characters: nobody in the UK really says “mate” quite that much. But there’s something endearing about seeing a familiar-looking signpost, telephone box or rubbish bin in the fictional world of Pokémon.

The new Pokémon designs are worth a mention, too, with several of those fitting into the British theme quite well. There’s Nickit, an aptly-named urban fox who evolves into Thievul; Wooloo, a cuddly and sleepy sheep; Yamper, a heart-butted electric corgi; and perhaps my favourite, Sinistea and its evolution Polteageist, Pokémon based around the most British of beverages, tea. 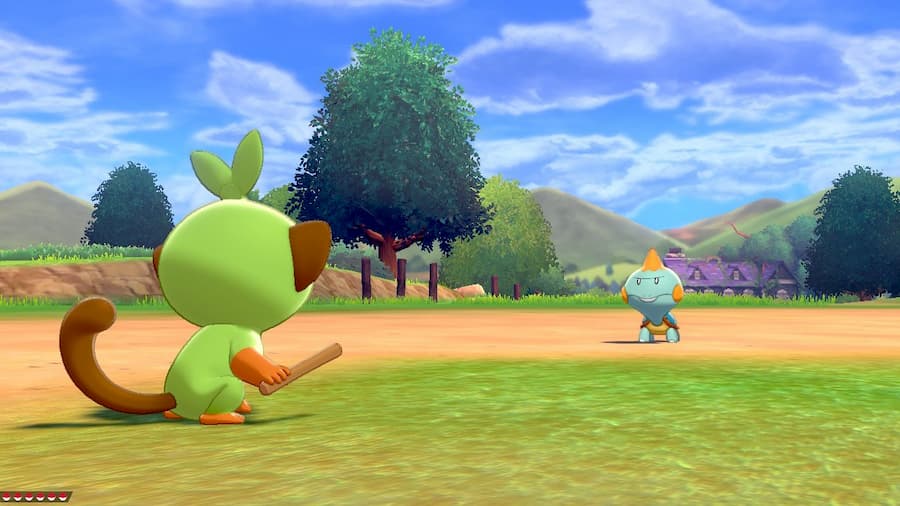 That’s just the tip of the iceberg when it comes to new Pokémon: including their evolutions, Pokémon Sword and Shield have over 80 new types of monsters to fight and collect. The complete Galar Pokédex features over 400 Pokémon and, despite there being some controversy over the game’s cut-down Pokédex, it never feels limited. If you’re a long-time fan of the series you may be disappointed not to see one of your favourite species not pop up, but the incredible new designs on offer go a long way in making up for it. 400 is a lot, and if you plan on catching ’em all, as the game wants you to do, you’ve still got a hefty task at hand regardless of the missing species.

The new Wild Area introduced in Pokémon Sword goes a long way in increasing the fun of the hunt. No longer are you confined to catching monsters in tall grass as you’re walking routes from one town to the next: the Wild Area is an expansive open-world area designed purely for training. Again, Pokémon will primarily exist in tall grass, so fights can be avoided if you’re in a hurry to get to your destination, but there’s a much higher concentration. Stronger Pokémon will also be wandering freely, so there are plenty of challenges to be had if you’re up for it. 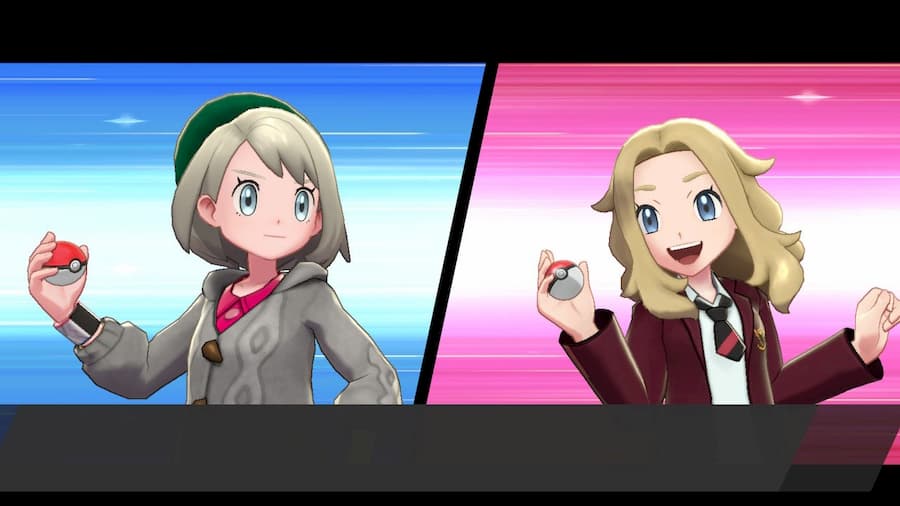 Perhaps one of the best things about the Wild Area is its weather effects. From rain to snow to blinding sunlight, it’s privy to all the seasons – and the type of weather you’ll find yourself in will affect not only what type of Pokémon you come across, but will affect you in battle, too. Fighting in a blizzard with any type of Pokémon other than ice will cause you extra damage, for instance. While it’s probably not enough of a threat to make you swap out your chief fighter, it is something that adds another worthwhile dimension to battles.

The real thrill of the Wild Area, though, are the Dynamax battles you’ll find yourself taking part in. Hidden in burrows across the region are giant Pokémon waiting to battle. See a column of red light sprouting up from the ground? It means there’s a Dynamax battle waiting for you. These battles are Pokémon Sword‘s answer to multiplayer raids – but don’t get too excited. You can team up with random players or invite friends to take part in the battles with you, but it’s often not worth it. Playing by yourself, you’ll be accompanied by three NPC characters. And despite the colossal size of these creatures, they never feel quite as challenging as they should. Indeed, having players by your side makes them a cakewalk compared to, say, fighting your rival one-on-one. 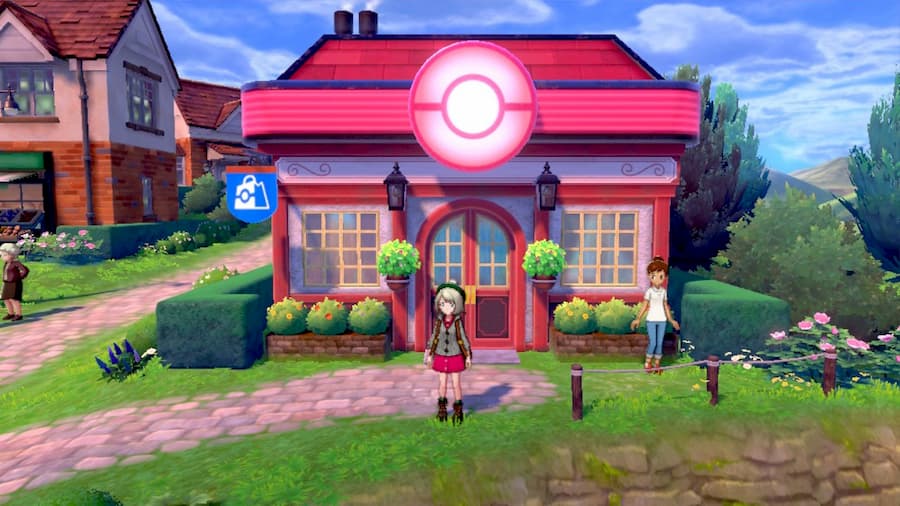 That’s not to say that battling a supersized Pokémon isn’t fun, though. While a bit more challenge would go a long way, there’s something to be said for the thrill of coming toe-to-toe with one of these behemoths. And getting to supersize your own monsters is a delight, too. While it perhaps doesn’t change up the game’s formula quite enough to be a worthwhile addition to the series just yet, Dynamaxing and Gigantamaxing is a step in the right direction. It’s nicely woven into Pokémon Sword‘s narrative, so it remains to be seen if it’s a feature we’ll see further refined in future Pokémon titles.

Outside of these giant battles though, it’s business as usual when it comes to fighting and capturing Pokémon. If you’ve played even a teeny bit of a Pokémon game before, you’ll be familiar with the concept: you’re starting out as a new Pokémon trainer, and it’s your goal to make your way to the top. You want to be the very best, like no one ever was. Etc. 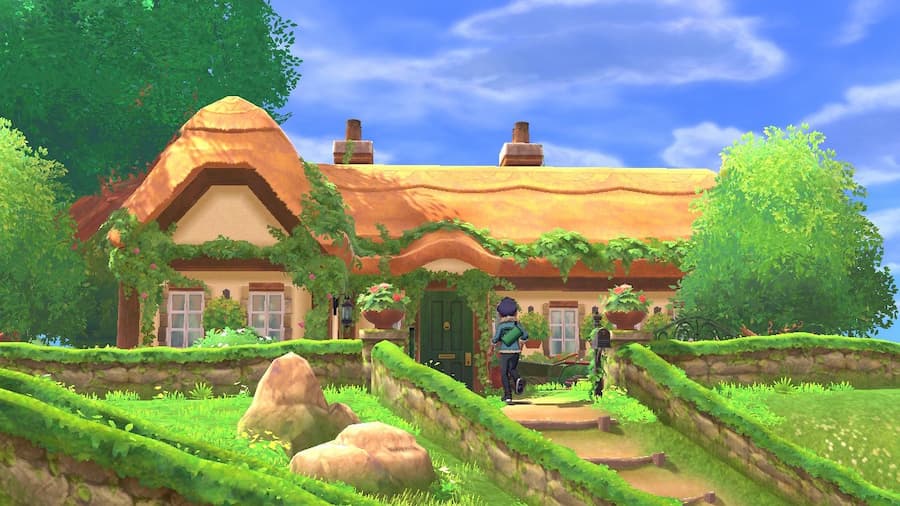 There are eight towns you’ll travel to in Pokémon Sword, each with its own gym and gym leader to conquer. With a few story distractions along the way, it’s a fairly linear affair, and you’ll probably get to the end of the game in about 20 hours. Of course, for true Pokémon fans, the end is merely the beginning; the real fun of the game is continuing to level up your Pokémon and completing your Pokédex. If you’re not a fan of grinding and repetitious battles, you’ll probably find yourself tired by the end of the game’s story.

That linearity is perhaps my main complaint about Pokémon Sword. I longed for more things to do outside of battle. While I was free to explore Galar’s beautiful towns, there’s not a great deal to do. Occasionally, talking to an NPC will net you a small side mission (delivering a letter to another town, for example) – which feels like a welcome break from the game’s main action. More side stuff wouldn’t have gone amiss; the world begs for more reasons to engage with it, after all.

With a wonderfully designed setting, it’s hard not to love Pokémon Sword. Galar is simply a joy to explore. Its new Pokémon are a varied and well-designed bunch, and the new additions to the series formula is enough to keep it feeling fresh, even if it’s not quite the evolution we’d hoped for. Worth a mention is the game’s fantastic sound design; its killer soundtrack sets the tone perfectly for every battle, pumping endless amounts of atmosphere particularly when facing off against gym leaders. Even if you’re not the type to want to fill your Pokédex or endlessly hunt for shinies, Pokémon Sword‘s charm is enough to keep you engaged until after the credits roll.

Want to support GameSpew? Buy Pokémon Sword using our Amazon affiliate link. It won’t cost you anything extra, but we’ll get a small slice of the purchase.