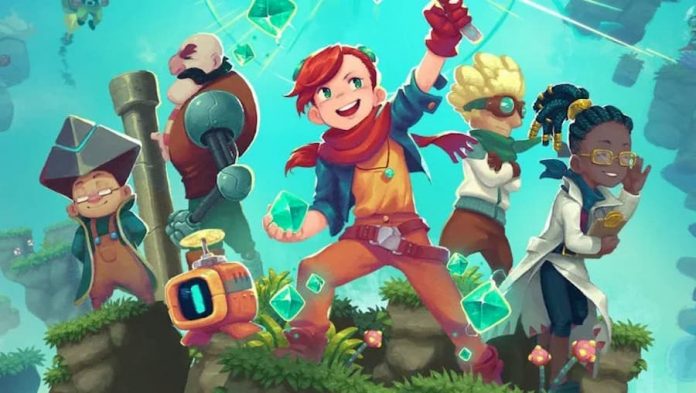 Who says you can’t use a wrench to whack people around?

Equipped with only a wrench at first, players will find themselves wandering around aimlessly in Red Blue Games’ newest Rogue-like title Sparklite. But it won’t take long for you to get into the swing of things. The Sparklite world moves around each time you awake – a clever way to procedurally generate a new level every time – but this won’t stop players from progressing forward.

In Sparklite, you play as a young woman named Ada who lives in the world of Geodia. The life force of the planet is called – you guessed it – “sparklite”, and almost everything and everyone relies on it to live. It’s the world’s currency as well as a power source.

So far, things have been to be going smoothly for Geodia with its people only collecting as much sparklite as they need. But now, the evil Baron has decided to farm sparklite for his own nefarious, selfish plot. Using sparklite to fuel his own powerful war machines, this corruption of the sparklite has caused the surface of the world to become polluted. Ada takes it upon herself to try and find the baron and stop him from destroying the world that she holds dear along with her best friend and robot companion. 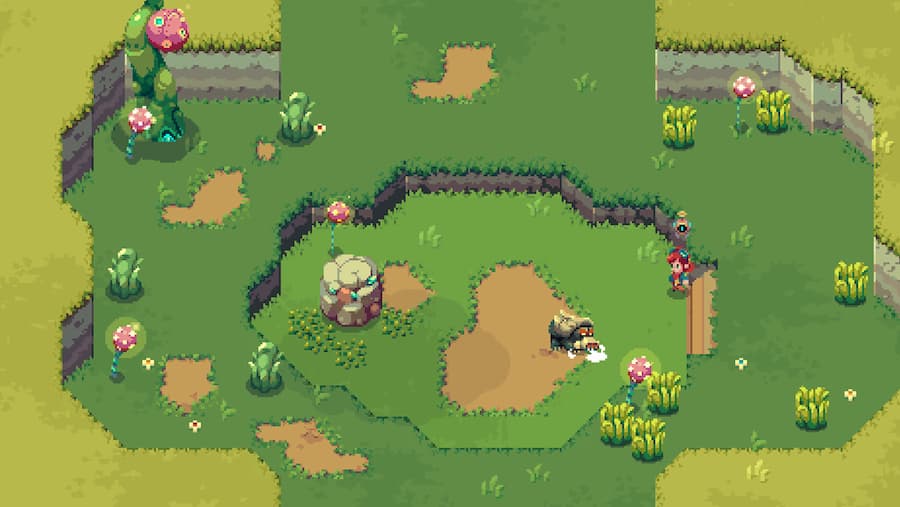 If you’ve ever played another procedurally-generated Rogue-like game, like Rogue Legacy or Binding of Isaac, you’ll have an idea of what to expect from Sparklite. You start by exploring the Vinelands of Geodia with only your wrench equipped to take down enemies with. You won’t survive for very long though; once you’re taken out, a group of people who live on a floating island come to your rescue and give you access to everything you’ll need to take out the Baron and his confidants.

To start out, you’ll have access to patches that you can wear to upgrade Ada. Ada’s health is made out of hearts, much like Link’s in the Legend of Zelda series. Heart patches give you a quarter of a heart more than what you start the game with. There are also energy patches, patches to upgrade your wrench, patches that you show the position of bosses on each map and much more. You’ll find new and improved patches down on Geodia as well as being able to purchase them in the medbay on your floating island. 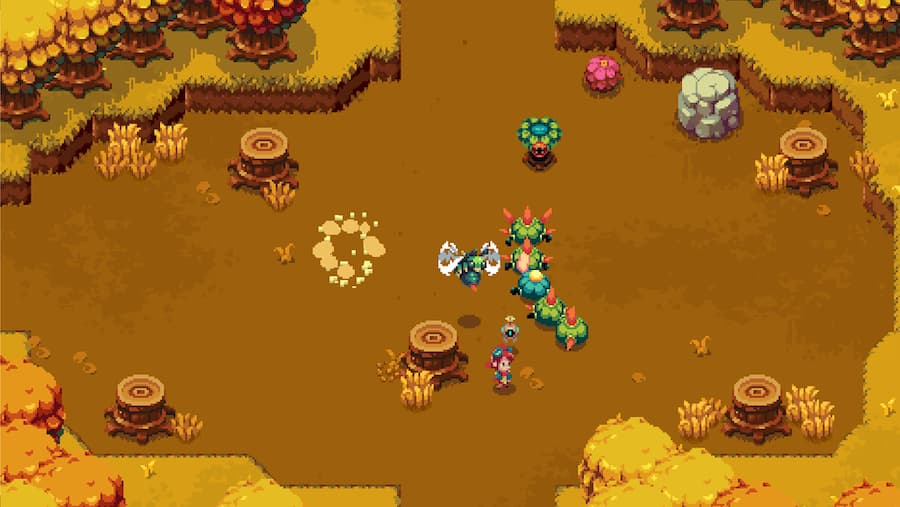 There are also shopkeepers on the floating island and, although none of them have their workshops set up to start with, once you fund them with a little bit of sparklite you’re able to buy from them and upgrade their shops to help you in your adventure. One shop sells things like bombs and torches to help you in exploring dark caves, and another enables you to build and upgrade your weapons. There are tonnes of ways to customise yourself in Sparklite to play exactly the way that you want to.

Down on Geodia, there’s lots of things to do. In the beginning, you’ll be doing a lot of sparklite grinding, earning money to upgrade Ada and her weapons as well as the shops. This can get repetitive, especially when you kill the same four types of enemies over and over again. Their moves never change either, so it becomes pretty easy to take them out without taking any damage. As you explore, after killing dozens upon dozens of weak little enemies, you’ll come across caves as well as dungeon-like levels that have rewards and chests at the end. These chests often also have sparklite in them, so if you’re on a mission to get enough sparklite to upgrade something, spelunking is a valid course of action. 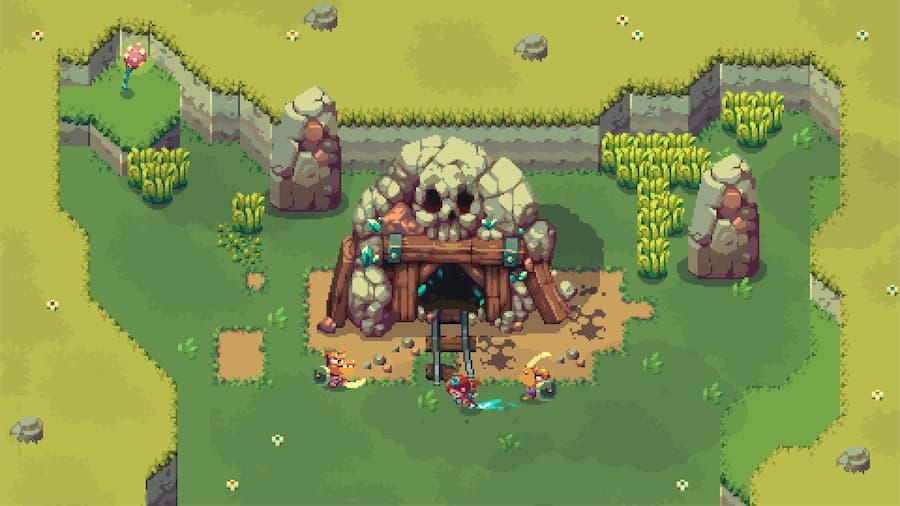 Sparklite boasts having co-op gameplay, so I was looking forward to bringing a friend along for the ride – but unfortunately co-op didn’t turn out to be what we thought. First, I had to grind for almost two hours in order to defeat the first boss. Only after the first boss is defeated can you play the game in co-op. Then, your friend can take on the role of Ada’s robot companion who can dig gems out of the ground and help with puzzles. And that’s it. He doesn’t do anything else. While you’re grinding away at enemies, hacking and slashing through goblins and monsters, your friend will be hanging around on the sideline waiting for you to find some kind of puzzle or gem for them to dig up, giving them an unsatisfying five minutes of fame. It’s a lacklustre and pointless addition, especially considering you can control the robot yourself in single-player mode.

For fans of the Rogue-like genre, Sparklite is a cute, easy-to-learn title. If you’re looking for a single-player adventure and you don’t mind spending some time grinding in order to upgrade your character, then this is a great title for you. The controls are smooth and sleek, its characters intriguing, and its boss battles ingeniously challenging. The fun soundtrack is also worth a mention, channelling classic adventure games of the 90s. Just don’t expect much from the co-op elements of the game, and you’ll have a good time.

Sparklite is available on PC, PS4, Xbox One and Switch. We reviewed the PS4 version of the game.