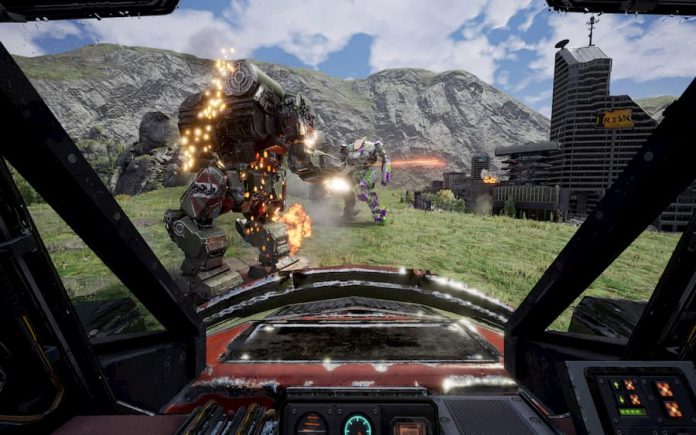 MechWarrior 5: Mercenaries begins with your father being killed.

It’s a terrible thing, but there’s no emotion. Your character is just as robotic as the mechs he pilots, it would seem. But this is MechWarrior after all; a game about doing battle in giant bipedal machines. What did you expect? There’s no time for grieving; it’s simply a device to allow you to take control of the mercenary outfit you’re a part of, complete with a new name and everything. Well, once you’ve escaped your pursuers at least.

So, MechWarrior 5: Merceneries does have a story, but you won’t really find yourself invested in it. Its characters are dull, and the plot just doesn’t go anywhere interesting enough to allow it to really grab your attention. The only reason you’re going to find yourself returning to MechWarrior 5: Mercenaries time and time again is to build your own mercenary outfit and complete contracts so you can make it the best. Plus, piloting mechs is fun. And using them to destroy other mechs is even better.

For the first few missions you’ll be going it alone in a mech that’s got decent pace but not particularly powerful. With that, you’ll learn the basics of the game, which have already been drilled into to you a little via a tutorial. Only once you’ve gained access to the more combat-focused mech you completed your tutorial in, however, do you feel capable of taking on enemy mechs in addition to the small fry more regularly thrown at you, such as tanks and helicopters. But it’s when you’re finally able to buy new mechs, hire pilots and explore the star system that MechWarrior 5: Mercenaries really feels like it’s begun.

While MechWarrior 5: Mercenaries does open up after a couple of hours of play, I can’t deny my disappointment that the customisation of its mechs is somewhat limited. This isn’t a game like Chromehounds where you can spend hours building a mech from scratch then taking it out into the field. Once you’ve bought or acquired a new mech, all you can really do to make it your own is paint it and equip some new weapons. But even then, your options are quite limited. You can’t go placing ballistic weapons in slots reserved for energy weapons, for example. 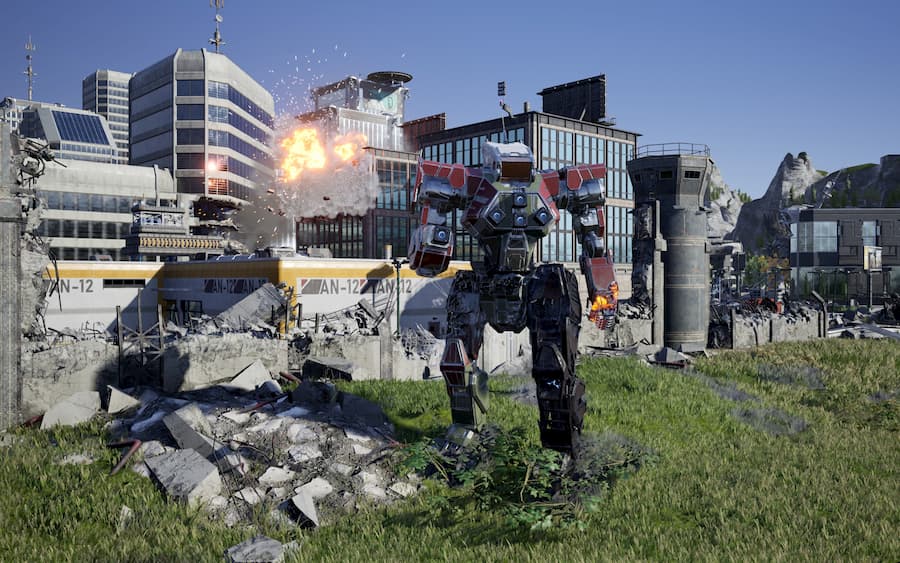 Keeping a hangar full of mechs is costly, too. Any damage sustained in battle needs to be repaired, and it also takes time and money to change their loadouts. Fail often and you might find yourself with cash flow problems, especially once you’ve been on a hiring spree to round out your mercenary outfit with new pilots. Up to four mechs can be taken into a mission, piloted either by AI recruits or actual human beings. That’s right: MechWarrior 5: Mercenaries features online co-op. It’s just a shame that there’s no incentive for people to join you. Only the host gets any real benefit, because mechs are generally much more effective when being piloted with someone with a brain.

Don’t get me wrong, it’s helpful taking computer-controlled mercenaries into missions if you either want to play alone or can’t find other players to join your game, as they at least take some of the heat off of you, but they aren’t impervious to injury. Should the cockpit or body of the mech they’re piloting get destroyed during a mission, not only will you be left with a large repair bill, but there’s a good chance the pilot will be injured as well. That means they’ll be sat in the sidelines recuperating for quite a while. But they’ll still want the salary that they’re due as the days pass by. Needless to say, it’s a good idea to have more pilots than you really need so others can be swapped in as injuries arise. You just need to keep an eye on those expenses: the best pilots command high salaries. 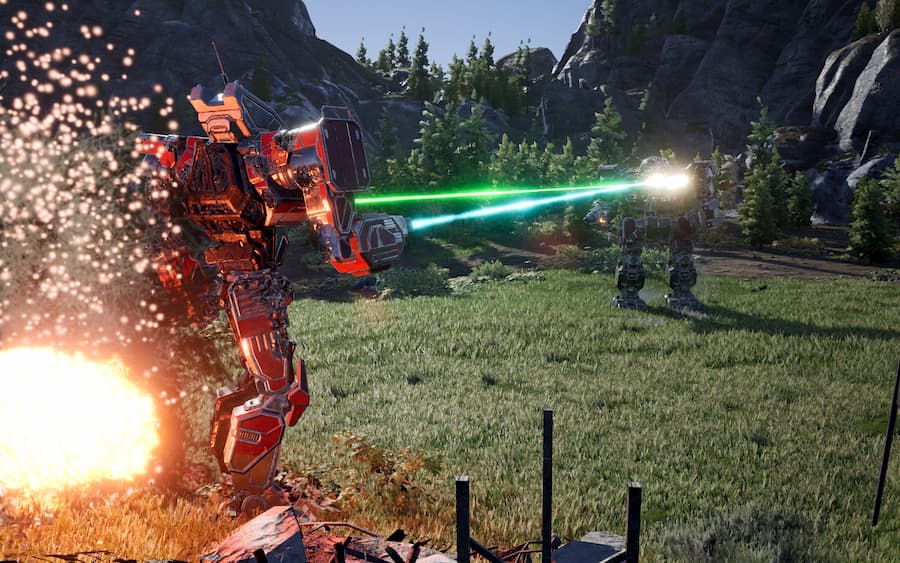 With so many opportunities to earn money though, only the careless will find themselves struggling financially. MechWarrior 5: Mercenaries‘ star map is vast, filled with planets on which bad guys need to be fought. Sometimes you’ll be landing just to assassinate a deadly target; other times you might be landing to defend an installation from waves of attackers. Missions are varied, and each one has a danger level for you to consider. The higher the danger level, the higher the rewards – but you should always be aware of your limits. The rewards on the table aren’t just monetary, either; while you will always be earning credits for a job well done, you’ll also be salvaging valuable parts, and of course boosting your reputation.

Once you’ve found your feet in MechWarrior 5: Mercenaries, it’s easy to fall into the comfortable loop of completing a contract, returning to your base, carrying our repairs and managing your band of mercenaries, then checking out the star map to locate and take on yet another contract. There’s always something to do, and seeing your mercenary outfit go from an unknown quantity to a well-respected organisation is rewarding. Some players may not find themselves as enamoured with MechWarrior 5: Mercenaries as much as others though. 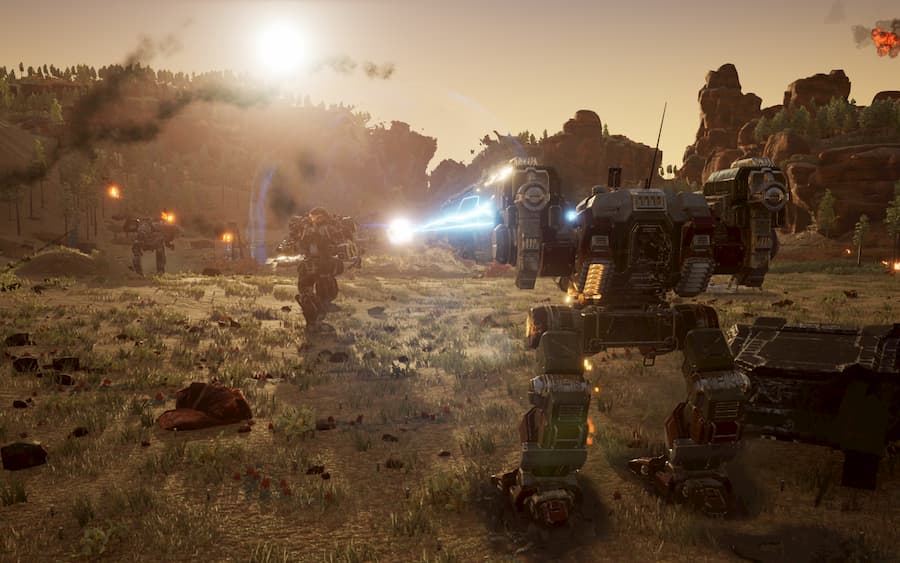 For a start, the action does eventually get a bit samey. With limited mech customisation and repetitive enemies, it can soon feel like you’re merely going through the motions after you’ve spent considerable time with the game. And while MechWarrior 5: Mercenaries has beautiful visuals, the range of environments feels quite small. You get tired of seeing the same scenery. Controller support is lacking, too. After a day’s work being sat at a desk, I was looking forward forward to playing MechWarrior 5: Mercenaries sat on the couch with a big TV. But no, you have no option but to use a keyboard and mouse.

On top of everything, combat just isn’t as exciting as you’d expect it to be, either. You obviously have to keep on the move to avoid enemy fire, and opponent mechs also employ the same tactic. The result can be a bit farcical, with both you and your enemies running around in circles trying to land shots on each other until someone falls. That’s not to say that the game’s combat doesn’t have any merit though. MechWarrior 5: Mercenaries‘ control scheme does mean there’s an element of skill involved. 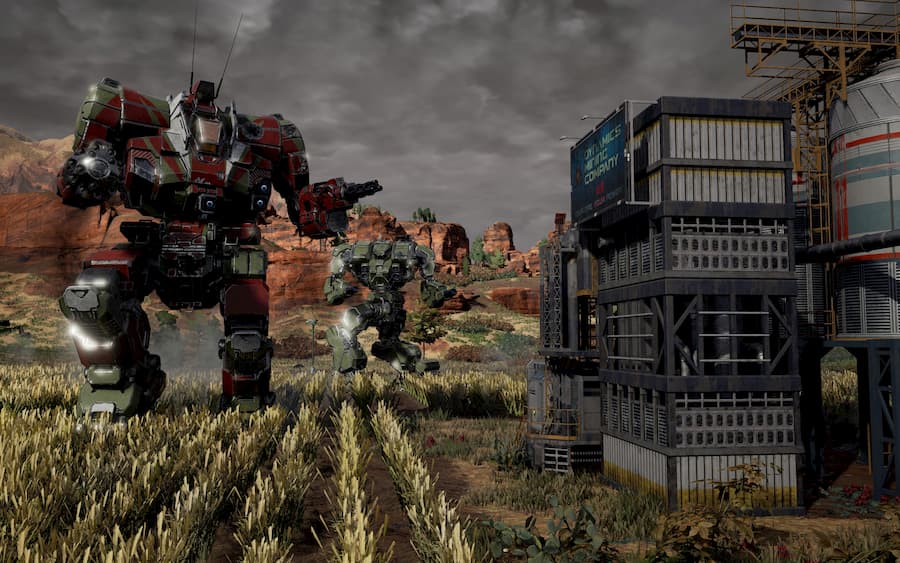 Rather than simply allowing you to walk in any direction with the press of a button, instead you accelerate and decelerate like you would in a vehicle. It makes your mechs feel like they have momentum, with them taking time to stop even when the brake is applied. They can turn as well, of course, and the upper torso can be rotated independently to allow you to aim at enemies in a wide range. It takes a little while to get used to, but once you’ve got the knack you truly do feel like you’re piloting a huge walking machine. And it’s a machine loaded with weaponry. Quite handily you can assign them into groups, so you can fire multiple weapons with just one button press, or even chain them together for fully automated destruction.

Playing MechWarrior 5: Mercenaries, I couldn’t help but feel like it’s an old game given a fresh lick of paint. There’s just something about it that is firmly rooted in the past. Not that that’s a bad thing per se, but it lacks a certain something to make a must-play title in 2019. If you love piloting mechs you’ll probably get quite a bit of enjoyment out of it, but those who also like to tinker with them and even build their own are likely to be disappointed. MechWarrior 5: Mercenaries concerns itself more with combat than creative freedom, but unfortunately many players are likely to find the action getting stale within 5-10 hours of play.

MechWarrior 5: Mercenaries is available on PC via the Epic Games Store. 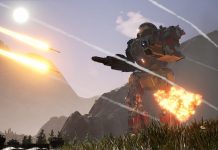