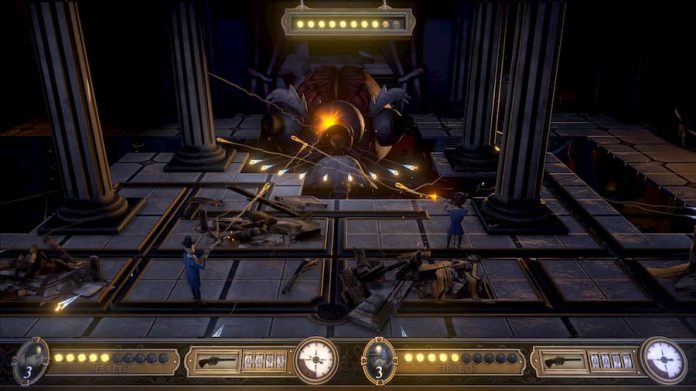 What would it look like if a mad inventor in the 1900s tried to make a video game?

If you want to find out, you only need check out the new announcement trailer for Bartlow’s Dread Machine, a quirky arcade shooter coming to Xbox One and PC this summer.

From Voodoo Vince creator Clayton Kauzlaric, the set-up for Bartlow’s Dread Machine describes an inventor named Arthur Harrington Bartlow, who created an extraordinary contraption using clockwork and early electricity, which allowed people to engage in frivolous distraction from the pressures of 1900s society. Unfortunately, the machine often injured its users with its frequent explosions of shrapnel, so poor Bartlow lost every penny he had.

Thankfully, the team at Beep Games and Tribetoy have painstakingly recreated this marvel for us to play from the comfort of our living rooms. A twin-stick shooter playable solo or with a friend in local couch co-op, you are tasked with the job of rescuing President Teddy Roosevelt from the anarcho-satanists who have kidnapped him.

Check out the announcement trailer below. While it starts off with a bit of a creepy tone, the game itself looks like a bundle of whimsical fun, and the aesthetic is amazingly inventive. For more information, you can head over to the game’s official website, or even its Steam Store page.

Doc McCoy is Making a Return for Desperados III