I haven’t watched the Dragon Ball Z saga from beginning to end. But just like how I’ve learned everything I need to know about Naruto from playing CyberConnect2’s video game adaptation of the franchise, Dragon Ball Z: Kakarot has both enlightened and entertained me.

Covering all of Dragon Ball Z‘s story arcs, Dragon Ball Z: Kakarot is a very generous offering. There’s around 40 hours worth of adventuring for most people, even more for those who want to see and do everything. Each of its explorable areas is expansive, giving it a grand sense of scale as you boost fly from one fight to the next. You could maybe criticise Kakarot‘s open world for being a little barren and empty, but when you’re soaring through the air you won’t really care. And though you are forced to use your feet to travel from time to time, you’ll be spending as little time as possible on land. Trust me.

Primarily you’re in control of Kakarot himself, or Goku, as he’s more commonly known. A Saiyan, he’s a warrior with great power, and can’t help but try to help when villains with nefarious schemes threaten both Earth and his friends. Throughout the course of Dragon Ball Z: Kakarot you do get to take control of various other characters, however, and others join your party in support roles. Some players will be disappointed with the small character selection, but for those there are other Dragon Ball games. This is an action RPG retelling a story, and for that purpose it’s very focused.

Character development is at the heart of Dragon Ball Z: Kakarot. By emerging victorious in battle and completing quests, you’ll earn experience which allows your characters to level up. And of course, level ups result in stat boosts. Your stats can be increased by eating meals, too, which also provide powerful temporary bonuses. On top of that, there are new Super Attacks to learn, Skill Trees to work your way through, and a Community Board system that allows you to strategically place Soul Emblems – pins of the characters you meet on your journey – to gain a variety of bonuses. Like in any action RPG, you’ll be trying to eke every bit of power out your characters to give you the advantage, and also keep the action fresh. 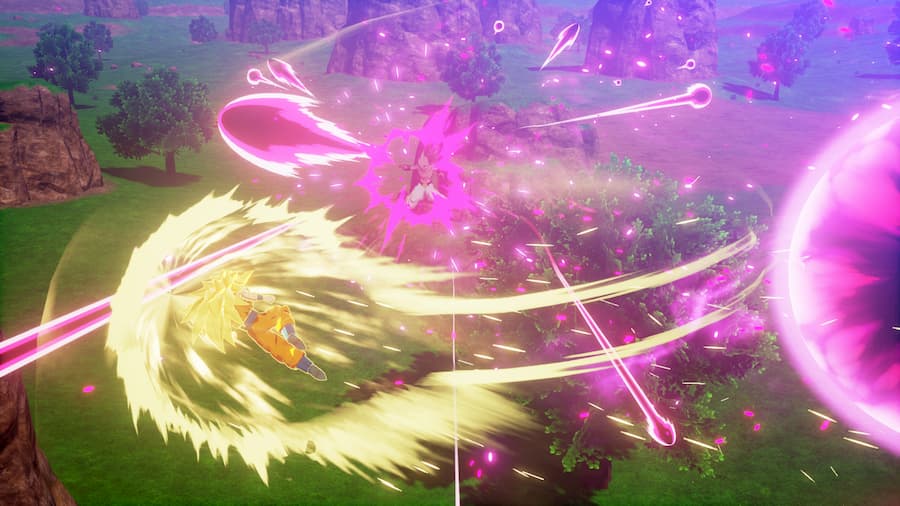 That’s Dragon Ball Z: Kakarot‘s main challenge, really: keeping you interested. With sub-stories that can feel a little repetitive after a while, an open world that doesn’t have a dearth of activities to undertake, and combat that, while fun, lacks real depth, Dragon Ball Z: Kakarot shouldn’t hold your attention as well as it does. It’s perhaps because of the snappy, bite-sized nature of its fights, missions and activities that it keeps you glued to the screen. By keeping things short and simple, you never really have time to get bored or annoyed. You’re prepared to look over its issues so you can enjoy the next bombastic story scene as reward for emerging victorious from an entertaining fight.

Speaking of fights, those found in Dragon Ball Z: Kakarot are your typical anime fare, but they feel more refined than ever. With the face buttons assigned to attack, dodge, and both charge and unleash Ki energy, it’s down to the shoulder buttons and more to open up more powerful and strategic options. Super Attacks, support-enabled Z combos and transformations are available, as well as a suite of defensive manoeuvres to get you out of a tight spot. For the random battles that are seamlessly instigated as you fly through fields, you can simply hammer the attack button and emerge unscathed. When you encounter villainous enemies and troublesome foes as part of the main story, however, you really need to take stock of your abilities and effectively employ them to succeed. Well, unless you carry a bucket-load of recovery items with you, in which case pretty much any fight becomes manageable.

For the purpose of this review, I’ve been playing Dragon Ball Z: Kakarot on Xbox One X, and visually it’s a mixed bag. Character models are glorious for the most part, with only the odd NPC looking a little angular. Environments, too, also have their ups and downs. As mentioned previously, Dragon Ball Z: Kakarot‘s world can appear barren at times. Move in close to the ground and you’ll also find that many textures are blurry and bland. But there are some moments where you look at the screen and just devour every inch of it; the colour and sharpness making some scenes really pop. Unfortunately, the high-res visuals on Xbox One X result in some slowdown during battles, but it’s only confined to the most hectic of moments. 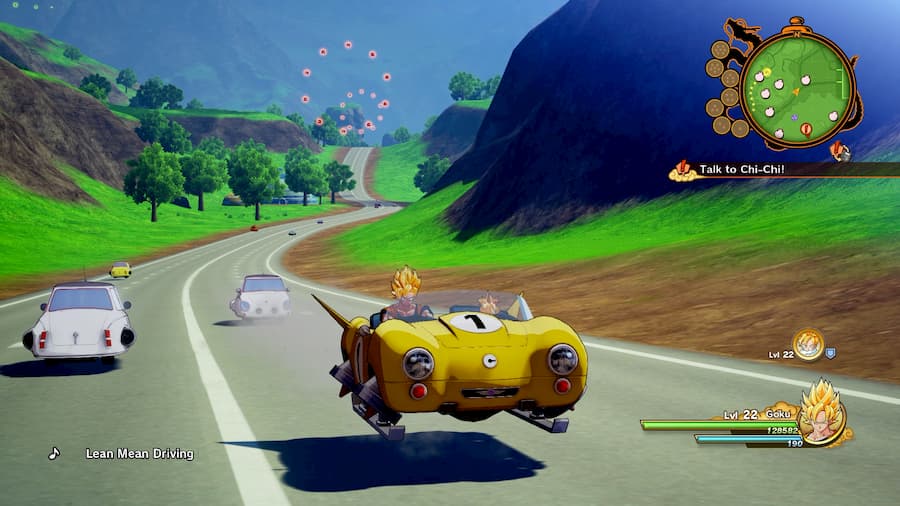 Alongside the inconsistent visuals and performance issues, Dragon Ball Z: Kakarot has some other minor issues, too. The controls for flying are a bit fiddly, for example, making it a bit less enjoyable than it should be, and the load times as you go between areas are a bit on the long side. Dragon Ball Z: Kakarot also drills things into you as you make your way through its story, but simply forgets or glosses over some gameplay aspects, leaving you in the dark. Get invested in the story, however, and you’ll find there’s nothing here that will prove to be a massive thorn in your side. All of the game’s misdemeanours can be easily forgiven when you’re unleashing a Kamehameha in an opponent’s face.

While Dragon Ball Z: Kakarot is undoubtedly a game for Dragon Ball fans, I feel that it’s those like me, who have an interest in it but haven’t found the time to sit down and watch it from beginning to end, that will get the most out of it. Someone like me doesn’t care if it takes liberties with the story, and neither will I be scrutinising it against its source material. With Dragon Ball Z: Kakarot you can simply enjoy an epic story from start to finish, while engaging in action RPG gameplay that’s both rewarding and exciting despite its shortcomings. If you’re a fan of both Dragon Ball Z and video games, chances are you’ll love Dragon Ball Z: Kakarot. And you’ll probably succumb to its charms even if you’re just a fan of action RPGs in general.

Dragon Ball Z: Kakarot is available on PS4, Xbox One and PC. We reviewed the Xbox One version.

Want to support GameSpew? Buy Dragon Ball Z: Kakarot using our Amazon affiliate link. It won’t cost you anything extra, but we’ll get a small slice of the purchase.