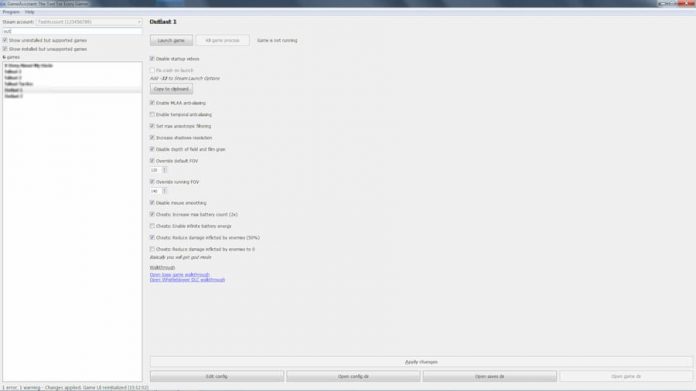 If you play the majority of your games through Steam and tend to fiddle around with settings and config files, there’s a new tool that you might be interested in.

Called GameAssistant: The Tool For Every Gamer and arriving on Steam in March, it offers a range of tweaks including: disabling start-up videos, set modern resolutions, enabling or disabling Vsync, fixing crashes, increasing visual performance or image quality, locating save files, and changing various other options.

The main aim of GameAssistant is to save time. If you like to tweak things in order to get optimum performance, it’s likely you’ll head to a game’s config files to edit things manually. GameAssistant wants to eradicate the need to do this, allowing you to make those changes with a few clicks within its easy-to-use setup.

The settings that GameAssistant allows you to tweak depends on what settings a particular game supports. For instance, using the tool with Call of Duty: Infinite Warfare allows you to disable intro videos and fix blurry textures. Yet Modern Warfare 1 allows numerous other tweaks including setting a max FPS, setting a max anisotropic filtering level, enabling mouse acceleration, overriding the FOV and more. It’s not a hacking tool; it just allows easier access to changes that games allow users to make.

The developers of the tool gave a couple of real-world examples of its usefulness. The original Outlast game, for example, supports ‘God mode’, but to enable it, 60 properties in the game’s INI file need to be modified. With GameAssistant, it’s a simple tick of a box. Equally, in STALKER the FOV can be overridden, but it requires a very specific modification in the DLL file. Make a small mistake, and the game will crash. GameAssistant prevents that from happening by allowing you to make that change automatically.

There are currently over 180 games supported by GameAssistant, including all three Bioshock games, Borderlands 2, Call of Duty titles, Half-Life and The Witcher 3. You can see the full list of currently supported games here. More will be added over time, and the tool supports modding, in the hope that the community will build up a massive library of games to cover even more of Steam’s most popular titles.

GameAssistant: The Tool For Every Gamer is currently scheduled to release on Steam on 2nd March where it’ll be available for $9.99. A discount will be available for those who buy the game within its first week. If the idea of automating games tweaking appeals to you, you can add it to your wishlist on Steam here.