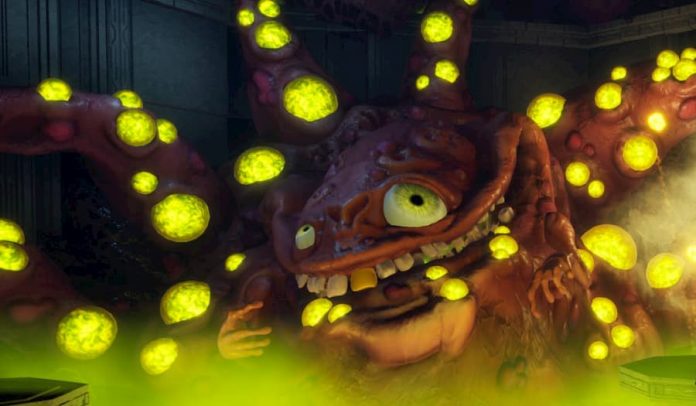 Some of the best moments in Journey to the Savage Planet come from fighting against the game’s bosses.

They’re all grotesque yet fantastically designed, and each put up a great challenge in varying ways. None of Journey to the Savage Planet‘s bosses are as challenging as Teratomo, the game’s final boss.

You’ll know when you’re approaching the final boss. It’s after you’ve activated all of the beacons and descended into the alien underground world. After clearing the tentacles in the underground area, you’ll finally descent the lift into Teratomo’s lair. Your fight begins here. Good luck!

Before you start, it’s comforting to know that there’s a checkpoint right before you start fighting Teratomo. So if you die, you don’t need to backtrack very far.

Teratomo is basically a huge squid with huge, yellow boils all over its body. Those boils are weak spots, and shooting them will cause Teratomo damage. There are three phases to the fight, and in between each phase you’ll need to walk to the centre of Teratomo and interact with an orb inside its mouth. Gross, right? Each phase sees the difficulty of the fight ramp up, but the goal is always the same: damage enough of its yellow boils.

Shooting the boils directly seems to work well enough, but it’s slow progress. The most effective way to deal with Teratomo is to use explosives: fire them at a cluster of boils, and you’ll damage multiple at once. Three or four well-placed bombs is enough to clear a phase of the boss fight.

While you’re targeting the boils, however, you’ll also need to keep an eye on your environment. There are three big platforms at the back, and three smaller ones in the front. The back platforms have health plants and bomb plants to restock and heal when you need to, and these are the safest places to stand – though be careful, as they’ll burst into flames at certain points in the fight.

The front platforms occasionally disappear too, so you’ll need to move quickly and stay agile in order to survive.

In phase two and phase three of the final boss fight in Journey to the Savage Planet, you’ll also be accompanied by pink flying squid – those annoying ones that cause a lot of damage by spitting venom. You’d be wise to try and deal with these first before focusing on Teratomo’s yellow boils.

So: keep moving, stay calm, and keep stocked up on explosives to fire at Teratomo’s boils, and you’ll soon complete the fight. Good luck!

How to Save Your Game in Journey to the Savage Planet

Can You Play Journey to the Savage Planet in Co-op? 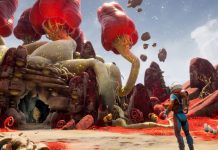 How Long Does it Take to Beat Journey to the Savage Planet?