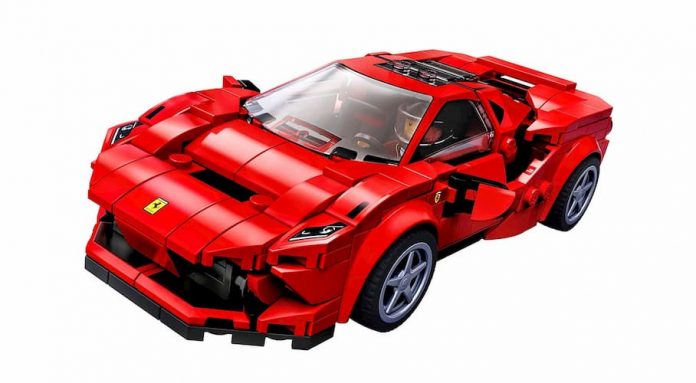 The LEGO Speed Champions range has had a revamp for the new year – and the model cars are now better than ever.

Previously retailing at £12.99, the LEGO Speed Champions models were six studs wide and generally consisted of somewhere between 160-190 pieces. They’ve always looked great, and have been one of LEGO’s better ‘cheap’ ranges. But now the price has gone up: a single Speed Champions car will set you back £17.99 from this point on. Don’t baulk at the price increase though: what you get for your money is a heck of a lot better.

The new LEGO Speed Champions cars now sit somewhere between 250-300 pieces. Rather than being six studs wide, they’re eight – and as a result feel much more in proportion to the car they’re based on. While still being a quick and somewhat inexpensive build, the new cars feel more grown-up; the perfect budget model for adults who can’t afford to fork out £200+ on the latest Creator Expert sets.

One of the new LEGO Speed Champions models is 76895, the Ferrari F8 Tributo. It’s made up of 275 pieces and comes with one minifig – an enthusiast driver kitted out in a Ferrari-branded t-shirt. He’s also got interchangeable hair and helmet. There’s one critical design flaw with this set though: if the minifig has his hair on rather than the helmet, he’s too tall to fit inside the car. D’oh. But it’s easily overlooked – especially considering how nice the model looks.

It took me, an experienced builder, around 40 minutes to finish the Ferrari F8 Tributo. They’re still not the longest nor most complex builds in the world, but the new, larger LEGO Speed Champions models do offer a more satisfying challenge. The detailing on the car is excellent; it feels like a true scale replica rather than a toy, and that’s quite a feat to achieve with less than 300 bricks. Of course, there are none of the moving parts or greater detail that you’d expect to see on the large Creator Expert sets – doors and hoods don’t open, for example – but that level of detail would be almost impossible on a set of this size.

Instead, what you get a sleek and consistent body that manages to successfully replicate the curves and angles of the Ferrari F8 Tributo. There’s a lot of sloped and angular bricks used, and to great effect. Once it’s finished, the LEGO 76895 Speed Champions Ferrari F8 Tributo is a beautiful-looking model.

There is one downside though, and this is true of most Speed Champions cars, new and old: stickers. So many stickers. Granted, the Ferrari F8 Tributo doesn’t have quite as many as some (when compared to, say, the Nissan GT-R), but there’s enough used that wrongly placing one, or making one a little wonky, will somewhat diminish the vehicle’s aesthetic. Several of the stickers are very tiny, making accurate placement very difficult. It’s annoying that tiny Ferrari logos have been printed to the edge of a 1×1 flat brick, but larger bricks could not also have been printed. At the very least, the car’s logo at the front could have been printed.

But even with the stickers, I can’t help but love the LEGO 76895 Speed Champions Ferrari F8 Tributo. It’s a fantastic little model and well worth its increased asking price. I’m excited to see what else will come from the Speed Champions range over the course of the year.

Want to support GameSpew? Buy LEGO 76895 Speed Champions Ferrari F8 Tributo using our Amazon affiliate link. It won’t cost you anything extra, but we’ll get a small slice of the purchase.