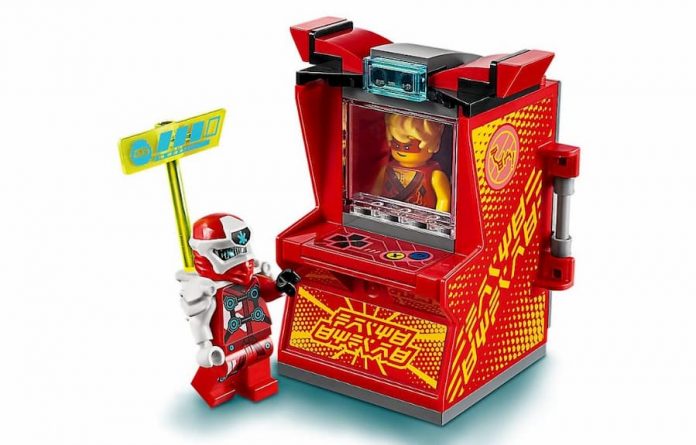 There’s not much to them: the Kai set (71714) that we’ve had our hands on is made up of only 49 pieces (and is actually the biggest of the three, with Jay and Lloyd being 47 and 48 pieces respectively). But the small size of these sets is offset by their quirky nature.

Each Arcade Pod is made up of an arcade cabinet, two minifigures and a wealth of Ninjago-themed accessories. There’s a range of weaponry to kit your Ninja out with, and a handy place to store it all inside the arcade cabinet. They make for a great little display piece on your desk – and if you have a bigger Ninjago display, they’d make a welcome addition to any Ninjago City.

But of course, we love them because they’re video-game themed!

There’s one downside though: there are a lot of stickers for each of the sets. Both the sides and the front of the arcade cabinet are decorated with stickers, and the unusual shape of the sides means it’s not exactly easy to align the stickers well. Once they’re placed, though, they look effective – just like a real mini arcade cabinet.

There’s a window where the screen of the arcade cabinet should be, and space inside for one of the two minifigures to stand – as if he’s being displayed on the screen. There’s room inside for the second minifigure to be taken apart and stored away too if you’d prefer, but personally we think the second one should be outside, ‘playing’ on the machine.

The Arcade Pods are, really, all about the two minifigures that come with them, but they’re a big upgrade from the previous pod-type sets we’ve seen, that have had a simple clamshell design to store a minifigure inside of. The arcade cabinets allow for cool storage of a minifig while still adhering to the theme of Ninjago (which has got more futuristic and videogame-inspired as time has gone on).

While the build isn’t going to help you pass much time – you’ll be done in less than 10 minutes – these Arcade Pods are a great addition to any Ninjago or minifigure fan’s collection. No matter where you decide to store them, they look great. And at less than a tenner, you really can’t go wrong.

Want to support GameSpew? Buy LEGO 71714 Ninjago Kai Avatar – Arcade Pod using our Amazon affiliate link. It won’t cost you anything extra, but we’ll get a small slice of the purchase.