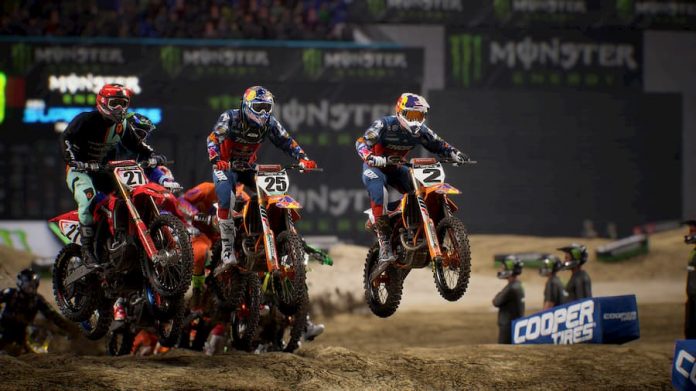 Another year, another entry in Milestone’s Monster Energy Supercross series. Can it continue improving on the previous year’s efforts? The answer is both yes and no. But mostly yes.

When developers boast about new physics, I usually roll my eyes – often you really can’t tell the difference. You can with Monster Energy Supercross 3 though, it’s obvious from the moment that you start playing that it feels different. It feels better.

Whether you’re on the ground or in the air, you have more control, and that makes for a more pleasant racing experience. Because after all, the most important thing in any racing game is control. The handling is more responsive; you feel happier putting the foot to the floor and flinging your bike around corners. Nailing perfect landings is also more intuitive, as well as performing scrubs. Monster Energy Supercross 3 plays better than ever before whether you’re a novice or a pro.

There are other improvements that have an impact on the moment-to-moment action, too, like new rider models and animations. The changes are subtle, but definitely noticeable. Finding a good flow is more important than ever in Monster Energy Supercross 3 as well; simply driving faster than your opponents isn’t guaranteed to get you a podium finish. Analysing the jumps and bumps up ahead and then measuring your use of the accelerator is more important. And the typical racing line isn’t always the best approach to every corner; sometimes you need the run up afforded by going wide. 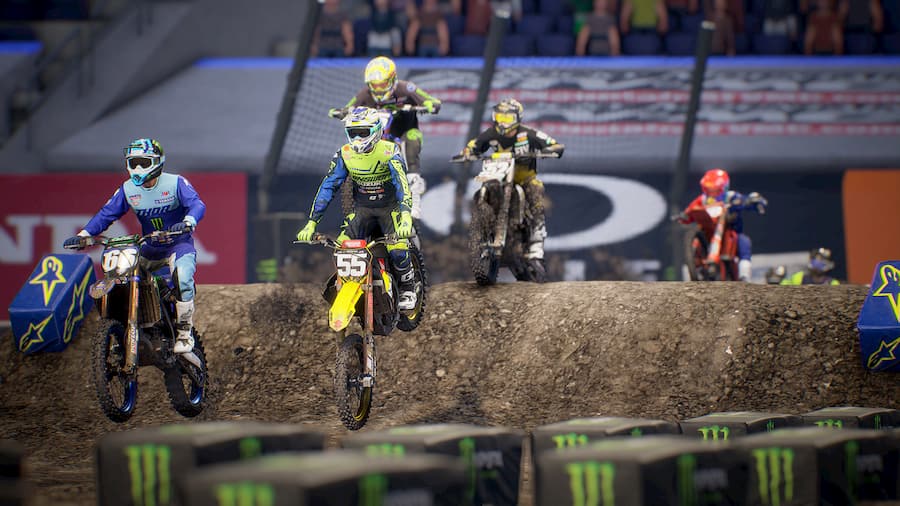 All the usual single-player modes are present: career, time attack, single race and championship. The free-roam friendly compound also returns, but I’ll get back to that later. First, let’s address Monster Energy Supercross 3‘s career mode, which unfortunately has regressed this year. Out are the training sessions, head-to-head races and press events that you could schedule between events, taking the career back to being little more than a simple procession of events. Granted, in my review of Monster Energy Supercross 2 I said the activities between events were inconsequential, but I still liked how they split up the action and added some variety. It would have been nice if Milestone had built on them and made them more worthwhile rather than dropping them entirely. 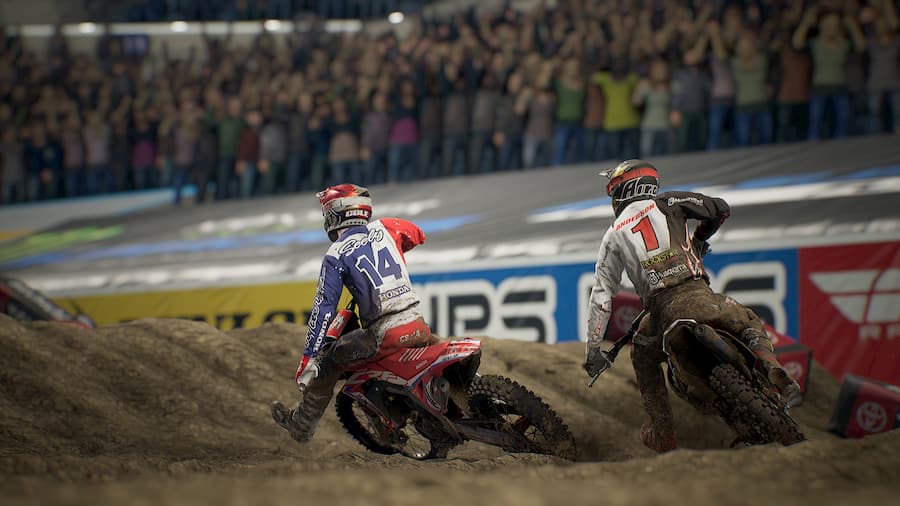 At least you can still choose whether to race for a team or a sponsor, the latter enabling you to customise and upgrade your bike with your increased race winnings. If you opt to race for a team, you’ll earn less but will occasionally get the offer to take part in team races, netting you a decent sum of cash if you win. You don’t have to do them, but they pop up so sparingly that you’d be mad not to.

When it comes to the compound, you can still race around it at your leisure if you like, but this year a compound-based challenge mode has also been added. It offers a nice change of pace compared to the ho-hum career mode, and the challenges themselves will keep you on your toes, testing your abilities to find a good flow and such-like. Do well enough and you can unlock some snazzy cosmetic items for yourself.

The compound can now be used in multiplayer, too, with three new event types providing some fun online action. Whether you just want to blast around the compound in free roam with friends, race through checkpoints or search for treasure, Monster Energy Supercross 3 has you covered. 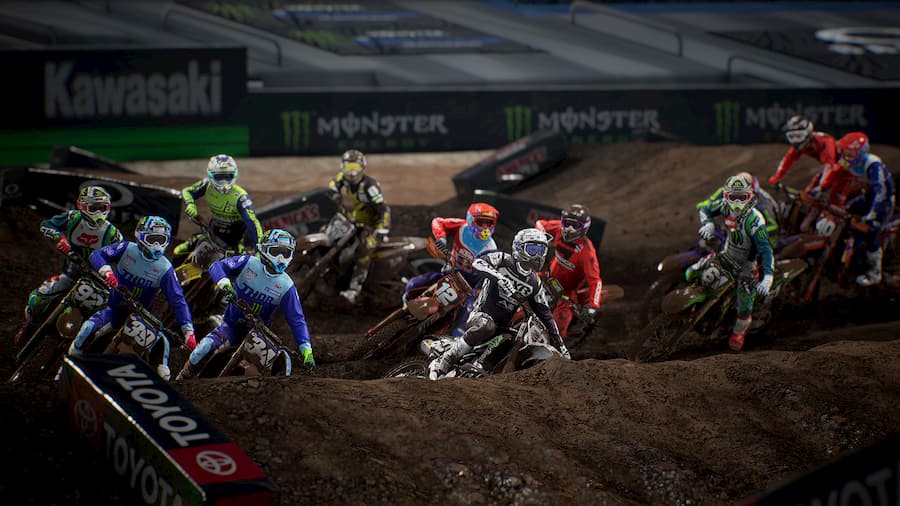 Of course, the Monster Energy Supercross series’ fantastic track editor makes a return, allowing you to create your own courses and share them with others or download those made by the community. New to Monster Energy Supercross 3 is the ability to race with the female body type, too. Improvements and new features are spread liberally across the game, it’s just a case of are there enough to warrant the purchase of the game if you have last year’s release? Probably, if you’re not that bothered about the stripped-back career.

Monster Energy Supercross 3 is yet another great Supercross racing experience by Milestone. It’s a shame that the developer has trimmed content from the career mode rather than add to it or give it more meaning, but improvements elsewhere make an impact. Thanks to improved physics, the usual graphical tweaks and the introduction of dedicated servers, Monster Energy Supercross 3 is the best entry in the series to date.

Monster Energy Supercross 3 is available on PS4, Xbox One, Switch and PC. We reviewed the Xbox One version. 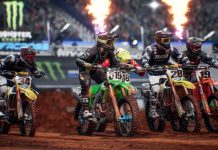