A lot of the time, video games can be pretty stressful.

Whether they be filled with shooting and looting, run ning and gunning, tense stealth sections or massively overwhelming open worlds with so much to do you don’t know where to begin, some video games can just be too much to handle.

We all need to relax at times, and for those much-needed moments of tranquillity, we’ve comprised a list of the most relaxing games available on PS4. Enjoy your zen time.

When a game looks as beautiful as Abzu, you will certainly want to take your time to soak in your surroundings, too. Packed with endless colourful fish and marine life along with ruins of lost civilisations, Abzu is one of the most relaxing games available on PS4. It’ll take you around three hours to complete, but I promise you’ll want to jump straight back in to experience its beauty over and over.

It’s colourful and mesmerising, and being able to fly around as a bird makes Aer a relaxing game thanks to responsive and intuitive controls. Speed up by flapping and flying with the winds, and slow down by hitting both of your triggers. On land, you can morph back into a human in order to walk around and take in the beauty that each island holds. There are plenty of secrets to find and some puzzles to solve, but Aer: Memories of Old lets you do everything at your own pace. And with no enemies to bump into and no fear of death, there’s absolutely nothing to worry about.

Whether or not you find Chime Sharp to be a relaxing game will probably depend on what kind of person you are. With several different game modes, the block puzzle-meets-rhythm game isn’t always relaxing, but in the right conditions, it can be.

Chime Sharp is easy to pick up and difficult to master, but if you play on one of the more relaxed modes with no timer or definitive end point, it’s a great way to unwind. Akin to Tetris in that you’re challenged to fit shapes into a grid, the music of the game changes as you fill up more of the screen. It’s incredibly addictive, that’s for sure. There are more pressing challenges on offer if you want, but when it comes to unwinding, stick to the ‘practice’ mode and you’ll be zen in no time.

Read our review of Chime Sharp

One of the most revered ‘walking simulators’ – and perhaps the game most credited with giving life to the genre – Dear Esther is a pleasant, if melancholy, walk across a picturesque island.

A narrated story is revealed as you progress, but as segments of the narration are triggered by walking past certain parts of the environment, you’re free to walk at your own pace. With plenty of gorgeous views to take in, you’ll probably want to take your time, backtrack along paths, and just soak in your environment. The fact that you can take Dear Esther entirely at your own pace makes it one of the most relaxing games on PS4.

Originally releasing on PS3, Journey may be a good few years old now but it doesn’t mean we love it any less.

A beautiful yet tranquil journey across a sparse landscape, Journey is about, well, a journey. And what a journey it is. It’s the type of game you’ll want to enjoy more than once, to take in the breathtaking surroundings and just get lost in the tranquillity of the game. If you’re looking for the perfect game on PS4 to help you relax, you can’t get much better than Journey

Read our review of Journey

Koi carp, synonymous with ponds in Japanese gardens, are nothing if not a symbol of utter relaxation. It makes perfect sense then, that PlayStation 4 game Koi — that lets you swim around as a koi — would be a truly laid-back experience.

With simple yet pleasant graphics, Koi‘s meant to be a tranquil adventure to escape polluted water. Swim around, uncover what aquatic world has to offer, and relax as you solve puzzles. Oh to be a fish…

A gorgeous adventure that follows a young boy explore a mysterious but beautiful island, RiME is one of the most relaxing adventure games you’ll find on PlayStation 4. It might hit you in the feels towards the end, but your time with RiME will be nothing but a pleasure.

Like any of the most relaxing games on PS4, Stardew Valley manages to be so cathartic because it lets you do exactly what you want, whenever you want. It’s a farming simulator that packs in plenty of exploration and adventure – there’s even a hint of dating simulation, amongst other things. There’s so much to do in this small pixellated town, and everything can be done at your own pace without any pressure.

Whether you’d rather plant and tend to crops, meet people in town or go exploring in the mines (there are enemies down there, though), Stardew Valley is a beautiful blank page waiting for you to write your own story – and not one ounce of it will be stressful if you don’t want it to be.

The Sims can be an incredibly relaxing, or it can be bloody stressful, depending on how you approach it. But since this is a list of the most relaxing games, let’s focus on the relaxing elements.

The great thing about The Sims 4 is that you can play however you want. While trying to control a house full of half a dozen people can be overwhelming, having a small household of one or two can be a great way to unwind. And if you do want a bigger family, giving your sims autonomy and sitting back and watching what happens can be hugely entertaining and relaxing – just like watching your favourite TV sitcom. We also enjoy getting lost in building and furnishing a new house – especially if cheats are turned on so money is no obstacle.

Usually, open world RPGs aren’t the most relaxing games, but family-friendly Yonder: The Cloud Catcher Chronicles is different. Its open world isn’t so massive that you’ll get lost in it, and despite being an RPG, it has no combat. Essentially, your time in Yonder will be spent exploring, collecting materials, and talking to villagers in order to complete tasks for them.

Being that you can wander around Yonder‘s world at your own will with no time limits or pressure as to what to do first, it makes for a lovely, laid-back adventure. You don’t even have to complete quests if you don’t want; the game packs in some farming sim elements allowing you to mind your own business and plant some crops or tend to some animals if you’d rather.

Read our review of Yonder 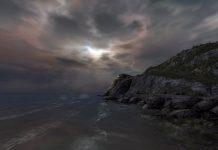