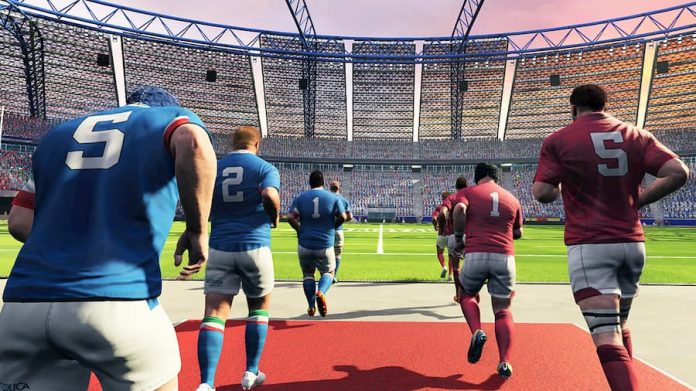 Rugby 20 is as close to the sport as you can get without getting covered in mud.

From tough rucks and tackles, to precision passing and plays, Rugby 20 is a rugby fan’s dream – even if the experience can wear off after a little while.

Sporting games have never been quite so dynamic and big as they currently are. From added career mode features to constant online competitions and even story-based gameplay elements, the bar for a quality sports game has never been so high.

Does Rugby 20 kick the ball through those goal posts? Not quite, but almost. It’s like a fantastic set play with no movement in the wing; or a ruck which just lacks the support needed. It’s clear that developer Eko Software has put a lot of thought into giving a realistic representation of rugby, but that alone isn’t enough to keep players coming back.

There’s no denying, though, that Rugby 20‘s best trait is how it presents the sport in all its glory. Each tackle feels realistic and tough; passes feel urgent and quick; and each movement just feels so important. Every match, no matter the team, involves fluid play where tactics and gameplay come together perfectly. 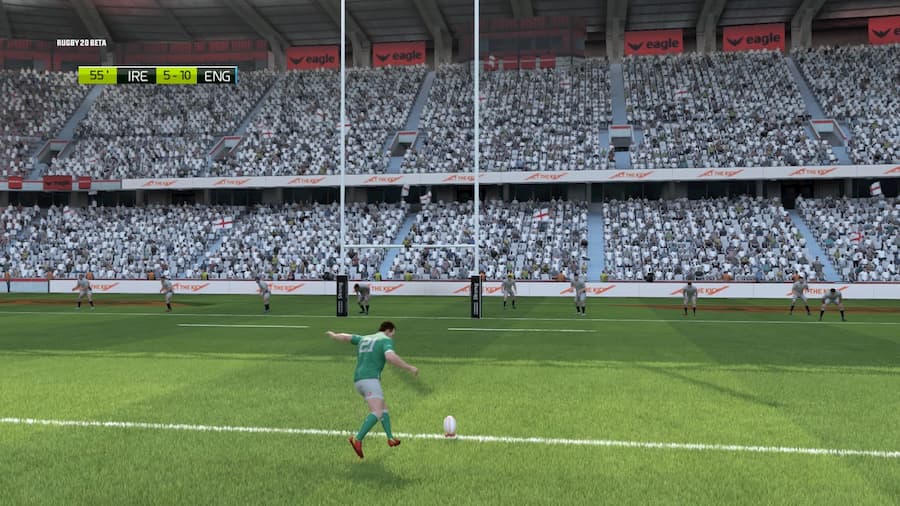 By its very nature, rugby is not always a fast-paced and open game. Rugby 20, however, ensures that there’s never a dull moment. Each match is based around two key elements where all other tactics branch off from: rucks and passing. Even on amateur difficulty, you’ll find it challenging to get past the opponent’s defensive line. This puts a lot of emphasis on strategy; you’ll need to know how best to play out from each ruck.

Rucks feel natural, with the player in control of how many teammates are involved and when to best release the ball into play. The game’s AI is fantastic; you can always expect a teammate to be ready to collect the ball from a pass, with other players running into space. Rucks are pivotal within any rugby game, and Rugby 20 has ensured that these feel as fluid as possible.

With responsive passing too, shifting the ball from left to right feels like a breeze and you’ll find yourself constantly searching for new opportunities to run at your opponent to find space. Gaps rarely open up, but when they do it feels electric to clear the defensive line and score a try. 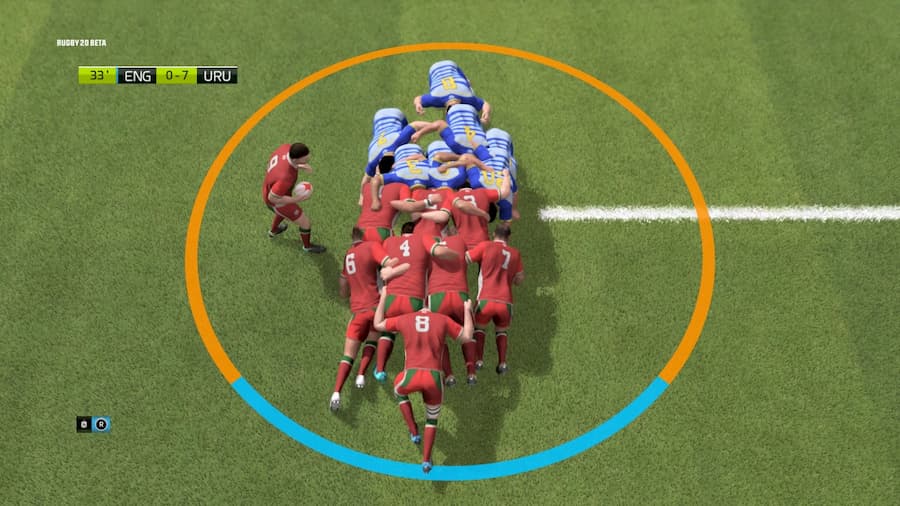 But that feeling is a closely followed by timing a perfect challenge. Tackling feels very realistic, with hard-hitting challenges giving off that true feeling of impact. Tackles involve timing too, with early or late tackles being less effective, or even being a foul.

Kicking for goal and scrums are the only two aspects of the sport which are let down in Rugby 20. Kicking feels unnecessarily difficult, with not only a power bar to perfect, but also a very sensitive directional component that is challenging to master and easy to overdo. On the other hand, scrums feel far too simple, with simple button commands ensuring you get the advantage, and a very easy mini-game involving keeping the cursor in a circle to ensure that possession is won/kept.

Where Rugby 20 does shine is in its roster; it boasts a vast array of official teams and players. It includes leagues such as the Top 14, Pro D2, Gallagher Premiership and Pro 14, and with international teams included too, it’s the perfect supplement to the upcoming Six Nations.

There’s a wide range of gameplay options too. You can opt for a quick pick-up-and-play match in exhibition mode, or the traditional league format in league mode. But, where Rugby 20 truly comes to life is in solo mode. This is a mode similar to FIFA’s Ultimate Team where the player collects cards to build their ‘ultimate team’ to take on other teams. 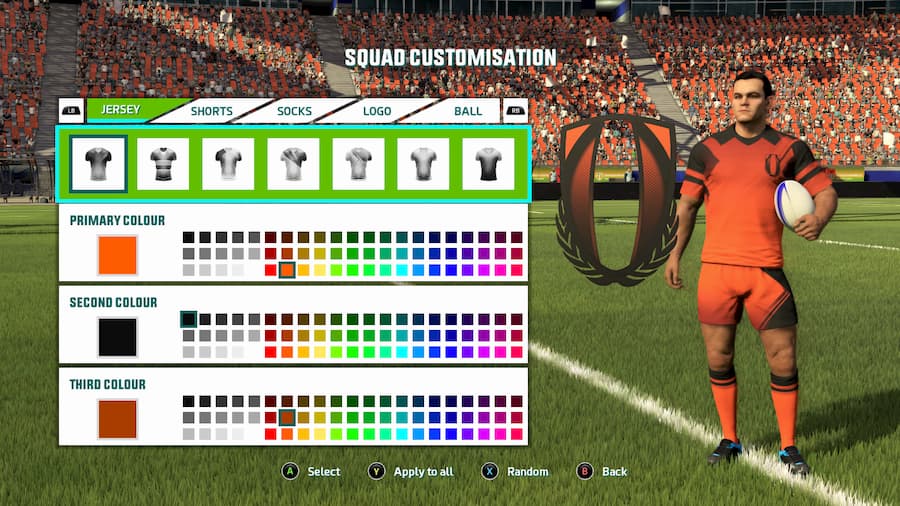 Starting out in solo mode, there are only two smaller leagues available, but levelling up (achieved through playing more often, and playing well) allows for more challenging leagues to be unlocked. Each match in solo mode provides both money and experience points, which can be spent on card packs. These packs either include booster cards that can be used in a match to improve your earnings, or can be spent on player packs. As you’d expect, the packs with the better players cost more.

Building the ‘ultimate team’ quickly becomes addictive; the opening of each pack can be rather exciting as you strive to collect the best cards possible. You can’t play solo mode with a real team, only with a team you’ve created yourself. Adding to the fun is the ability to design your own team logo and fully customisable kit. The kit design options are fantastic and vast, and you can design your team however you want; even in the garish orange that I chose.

However, Rugby 20 falls victim to two key problems: lack of replayability and lack of atmosphere. Other than competing in all the competitions available, there’s no real final goal to solo mode; it feels a little empty, and could really benefit from an added sense of competition to it. 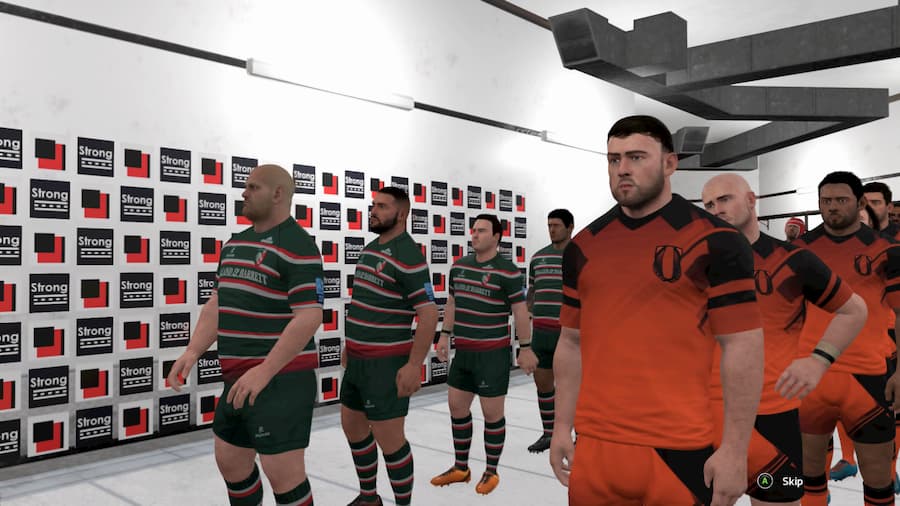 Solo mode in particular can become repetitive very quickly. The excitement of unlocking new players soon gives way to ennui due to the lack of any player interaction. As a result, it feels much less ‘alive’ than other sports games.

Matchday experiences, too, feel very flat. The commentary is passable, but there are a few mistakes that occasionally happen, and the use of player names and team names feel very ‘insert name here’ awkward. In terms of graphics, Rugby 20 is merely fine; but at the side of the fantastic-looking sports games put out by the likes of EA every year, it feels very lacklustre.

Despite its problems though, Rugby 20 still boasts the most impressive rugby videogame experience you’ll be able to find. While its lack of atmosphere and limited longevity stand in the way of it being as good as it could be, the joy of actually playing a match is hard to beat. Hard-hitting tackles, tense build-up play and tactical tweaks make Rugby 20 a must-play for any fan, as long as they’re willing to overlook its shortcomings.

Rugby 20 is available on PC, PS4 and Xbox One. We reviewed the Xbox One version.

Want to support GameSpew? Buy Rugby 20 using our Amazon affiliate link. It won’t cost you anything extra, but we’ll get a small slice of the purchase. 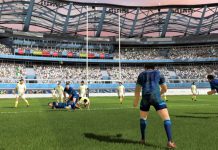