The SEGA Master System was the first console I ever owned, and of all the games I played on it, Shinobi was one of my favourites.

Because of that I was, of course, excited to jump into the title once again when I discovered it was going to be a part of the SEGA AGES range. And while it is undoubtedly dated and surpassed by its numerous sequels, Shinobi is still a whole lot of fun.

Released in arcades in 1987, Shinobi introduced gamers to modern-day ninja Joe Musashi, who’s out to put an end to the criminal activities of an organisation called ZEED. Through five missions, each consisting of numerous stages, he has to rescue the kidnapped members of his clan while dealing with a variety of foes, ultimately squaring up against a troublesome boss at the end of each mission.

Along with the skills you’d expect a ninja to have, like being able to jump really high, throw shurikens and perform melee strikes, good old Joe can also sparingly make use of powerful ninjutsu, clearing the screen or greatly damaging bosses. What really impressed me all those years ago about Shinobi, however, was how it lets you jump between the foreground and background in some stages, allowing you to avoid certain enemies and get around troublesome obstacles, and it’s still a neat gameplay element today.

While time hasn’t been kind to its visuals and its soundtrack isn’t as great as I remember it to be, Shinobi is still a blast to play. It’s a test of your reflexes and your memory, and the wide variety of enemies out for your skin keeps you on your toes. It has fun with its bosses, too; they’re not all just bigger than than normal normal ninjas. Fighting against a helicopter may be daft, but it’s daft in the best possible way. 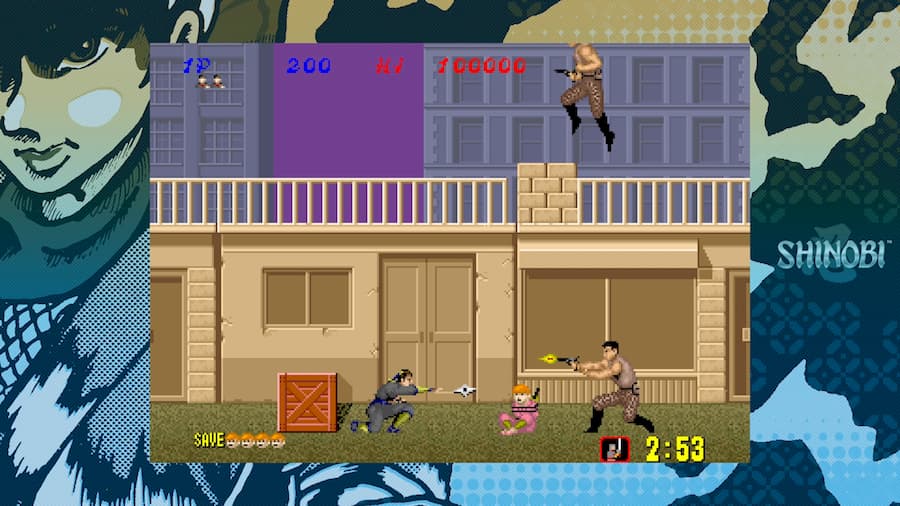 Ported to Switch by M2, Shinobi is flawless on the handheld. Both the Japanese and international versions of the game are included, and there are a wealth of new features. You can change the difficulty and the default number of lives, for example, as well as the speed of your enemies’ projectiles. There’s also a rewind function so you can correct any errors that you make, and there are numerous screen size and filter options to suit your preference. And the extras don’t stop there.

Online leaderboards mean you can see how your ninja skills stack up against others all around the world, and track numerous methods of play including melee attacks only. And with that in mind, you can now assign a dedicated melee attack button. Throw in a level select option so once you’ve completed the game you can jump straight into any one of its many stages, and you have the most feature-packed version of Shinobi ever. 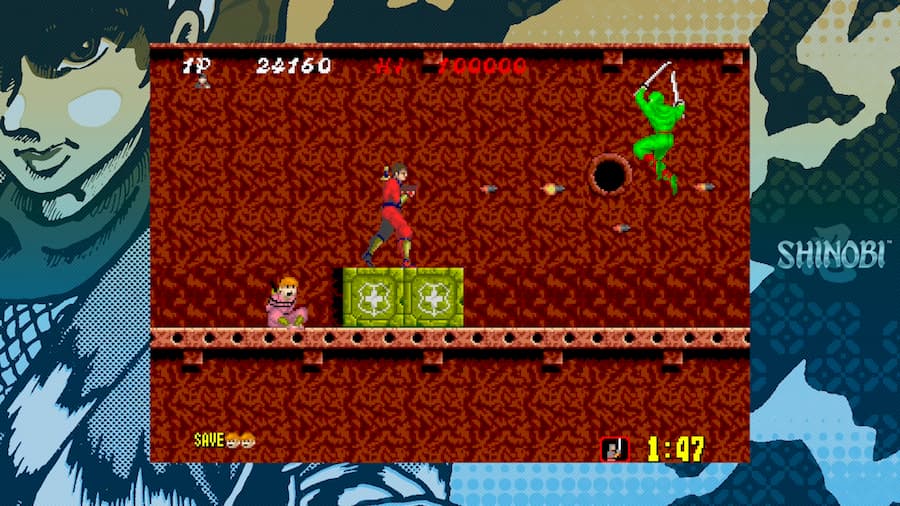 The only disappointment here is AGES mode, which simply makes Shinobi an easier game overall. Start up AGES mode and you’ll find that Joe Musashi dons a brilliant white outfit, granting him an additional hit before he dies. On top of that, his attacks are also constantly powered up. With its multiple difficulty levels, stage select and rewind functions already making Shinobi a breeze, AGES mode feels quite redundant.

Shinobi isn’t the best game in the series – that accolade belongs to Shinobi III: Return of the Ninja Master – but it’s still a classic, and it’s still very much playable. Like all of the SEGA AGES entries, it’s fairly priced considering the additional features, so if you’ve ever enjoyed combating ZEED as Joe Musashi it’s worth picking up. It’s just a shame that AGES mode focuses on making the game easier rather than changing the gameplay up.