I like to think I know a thing or two about graphic novels.

When I’m not curled up in bed playing video games where I have to fight off super mutants or grow tomatoes on a lovely farm, I work at my local library. Spending my days among dusty books has its upsides as well as its downsides. Downsides include germs and human interaction. But the upsides often outweigh the downsides. Most of the time anyway.

Working at the library has given me the opportunity to read and discover – you guessed it – books! Glorious books! Books I’ve never heard of or ever seen in my entire life. Of course, life gets in the way so I’m not really able to read everything I’d like, but I have picked up lots of graphic novels.

Here are my picks of the best science fiction/fantasy graphic novels and manga that you should be reading right now.

This particular series I discovered after my dad read it and recommended it to me. I was put off by the strange cover, but I’d be lying if I said I wasn’t curious about it. Saga, written by Brian K. Vaughn and illustrated by Fiona Staples, follows the story of Alana and Marko, a couple from warring families, and their daughter Hazel who is born at the very beginning of the series as well as other brilliant minor characters.

Alana and Marko’s opposing families wish them dead for having a child together. There are some political complexities that readers will discover as the series continues and they uncover the real story behind each of the characters and their families. Saga has not only memorable main characters, but diverse minor characters as well as gorgeously drawn settings and a heart-wrenching script.

Bounty was a graphic novel that I very randomly came across when perusing the shelves of my library. I was really attracted by the art style as well as by, of course, the brilliant Kurtis Weibe who created one of my other favourite comics (further down on this list), Rat Queens.

The story follows The Gadflies who happen to be the most wanted criminals in the galaxy – robbing corporations to redistribute wealth to the destitute. When they suddenly gain a bounty to match their reputation, the duo are forced to take on a career as bounty hunters. With gorgeous art and a great story to boot, Bounty is a comic to look out for.

3Ghost in the Shell

You’ll rarely meet any manga fan who hasn’t read The Ghost in the Shell. The original run of the manga began in 1989 with all three large volumes earning critical acclaim. The story has since spawned an anime, video games and even a live-action film (albeit a terrible one) featuring American actress Scarlett Johansson. But the less said about that the better.

The story of the manga follows a counter cyber-terrorist organisation, Public Security Section 9, led by protagonist Major Motoko Kusanagi. Based in a futuristic Japan, technology has advanced in such a way that many humans possess what is called a “cyber brain”. Major Motoko Kusanagi herself is a cyborg who survived a terrible accident when she was a child and her body is completely made up of a prosthesis. Unfortunately, cyber brains are open to hackers and therein lies a great conflict.

Ghost in the Shell is a must read for anyone who enjoys sci-fi and especially anyone who likes manga. That’s all there is to it!

Nimona was an absolute joy to read when I first discovered it two years ago. I’ve since read the novel four times and loved it more each and every time. Originally Nimona was a web comic by writer and artist Noelle Stevenson (who also worked on the popular ongoing graphic novel series Lumberjanes) and was actually used as her senior thesis in college.

Nimona follows Lord Ballister Blackheart, a knight-turned-supervillain who is consistently pursued by his arch nemesis, Sir Ambrosius Goldenloin of the Institution of Law Enforcement and Heroics. Lord Ballister is joined by Nimona, a sprightly, butch shape-shifter as they attempt to take down the group called The Institution. Nimona has everything you might want from a graphic novel: romance, suspect, humour, DRAGONS. You’d be a fool not to pick it up.

Mooncop is a very short graphic novel recommended to me by one of my co-workers. The real beauty of the book stems from its simplicity. The art style as well as the dialogue are easy to follow and understand. You won’t find any clogged panels or overwhelming, overarching story lines here.

The story follows a nameless lunar officer as he goes on some jobs – taking a girl home, following a lost dog, etc. – on the moon. The people are part of a moon colony that is on the decline, losing people who have had to head back to Earth due to the colony being left underfunded. Mooncop feels like a story about being stuck in a rut in a small town that just happens to be on the moon. Touched with humour and a little bit of romance, it’s just a really lovely book.

Y the Last Man was probably my first proper graphic novel series as an adult. My dad picked it up at the local comic book shop in our town and we both got addicted to the story. Written by Brian K. Vaughan, the story follows Yorick Brown an amateur escape artist and his monkey Ampersand, the last two males left alive after all living mammals with a Y chromosome simultaneously die. Society suddenly collapses due to this major loss of life as all of the women left try to rebuild.

Yorick simply wants to find his fiance who was on a trip in Australia at the time of the great man extinction, but is faced with many barriers as he tries his hardest to keep his existence a secret. With complicated politics, drama, romance and more, Y the Last Man was a stepping off point for my obsession with graphic novels and it could be yours too.

For those of you that might have played or been a fan of Telltale Games’ The Wolf Among Us, Fables, created by Bill Willingham, is what the game is based on. Reaching 150 issues between 2002 and 2015 (and multiple spin-offs as well), Fables follows a group of fairytale characters who live in a place called Fabletown in a hidden location in New York City. Bigby Wolf acts as sheriff of the town and is assisted by deputy Mayor Snow White for much of the series as they deal with the goings on that befall the characters.

Fables is a fantastic series for anyone interested in fairytale characters. The series can get violent at times, so beware: it isn’t really safe for younger readers. But anyone of age, looking for a long running series to dive into, won’t be disappointed here.

I have a strong love/hate relationship with Rat Queens due to its complicated history and its multiple changes in artists. Originally created by Kurtis Wiebe and illustrated by Roc Upchurch (who was later removed from the series), Rat Queens follows a group of adventurers made up of: Hannah, an elven mage, a hipster dwarf Violet, the atheist human cleric Dee and the hippie halfling Betty.

I love Rat Queens’ story and characters as well as its inclusion of LGBTQ+ characters. Unfortunately, I fell in love with Roc Upchurch’s art style and since his removal from the series, the characters haven’t felt the same to me. Still, for anyone looking for a good laugh, Rat Queens is a fantastic series with a load of wonderful artists working on it so for anyone who enjoys a good adventure tale, this is one to try.

Descender is one that will pull on the reader’s heart strings for sure. Created by Dustin Nguyen and Jeff Lemire (Sweet Tooth, Family Tree), Descender follows a young robot as he struggles to survive in a world that has recently outlawed all androids. With intense scenes and heartfelt moments, it is likely to surprise many.

Descender is gorgeously drawn and has a brilliantly engaging script that will bring readers in and keep them there for a very long time.

I picked up Astra Lost in Space when I first saw its cover and loved the details in each character. Created by Kenta Shinohara, the story follows a group of students who travel to a nearby planet for their “Planetary Camp”, which is customary for all students in the year 2063. After they encounter a strange phenomenon during travel, the students must try and work together to survive the dangers of space.

Astra Lost in Space does a brilliant job of keeping the reader in suspense all throughout the story, questioning if characters are good or bad. The artwork is brilliant and the series is just long enough that, if you get your hands on all the books, you’ll have it finished in just a few days. 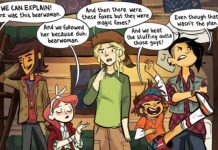 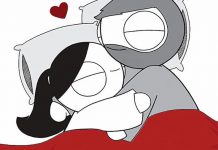 The Wolf Among Us Review