Zombie Army 4: Dead War is finally available, and so of course there’s a launch trailer.

Blasting zombies has never been more fun thanks to Dead War, and whether you own a PS4, Xbox One or PC you can get in on the action.

Playable solo or with up to three other players online, Zombie Army 4 features a campaign filled with nine thrilling missions and a horde mode for further undead killing antics. Add in weekly events, difficulty options and a mountain of unlockables, and you have a game that you can really sink your teeth into. That’s one of the reasons why we rated it great in our review. More content is set to arrive in the future, too.

Watch the launch trailer for Zombie Army 4: Dead War below, then perhaps buy the game if you suddenly feel the need to massacre the undead. You won’t regret it. 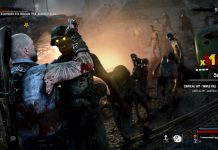 How to Get Upgrade Kits in Zombie Army 4: Dead War