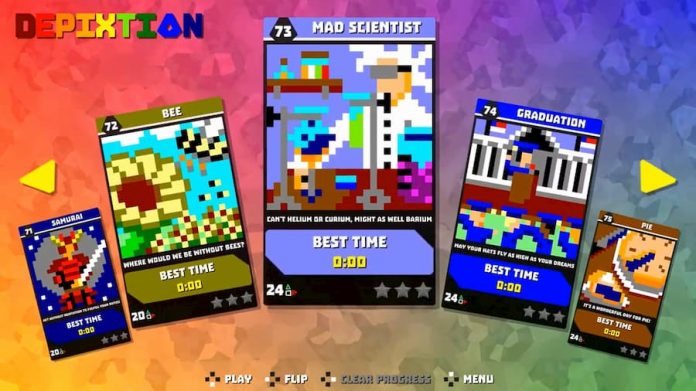 The Nintendo Switch already has its fair share of Picross-style games, but a new one has just been added to the fray: Depixtion.

From DevHouse Games, Depixtion describes itself as “a colourful puzzle game”, which is a fairly accurate and succinct description, really. Colour-based Picross puzzles are nothing new; Lightwood Games’ Pic-a-Pix Deluxe introduced them to Switch two years ago, and Jupiter’s latest release, Picross S3, added them into the mix.

But Depixtion‘s spin on adding colour to traditional Picross puzzles is a little more interesting. Rather than having multiple colours in one puzzle, each complete picture is made up of three puzzles; one for each primary colour. Each puzzle features two shades of colour and, when completed, the three puzzles overlay each other to reveal a completed image.

There are 99 puzzles to complete in Depixtion, but almost 300 individual Picross puzzles to complete – a good dozen hours or so of gameplay, unless you’re some sort of Picross wizard. Its menus are minimal and easy to navigate; you simply select a puzzle and jump right in. You’re given a time for completing the overall picture, as well as individual times for each colour layer. It means if you want to go back and play, you can challenge yourself against your previous score. 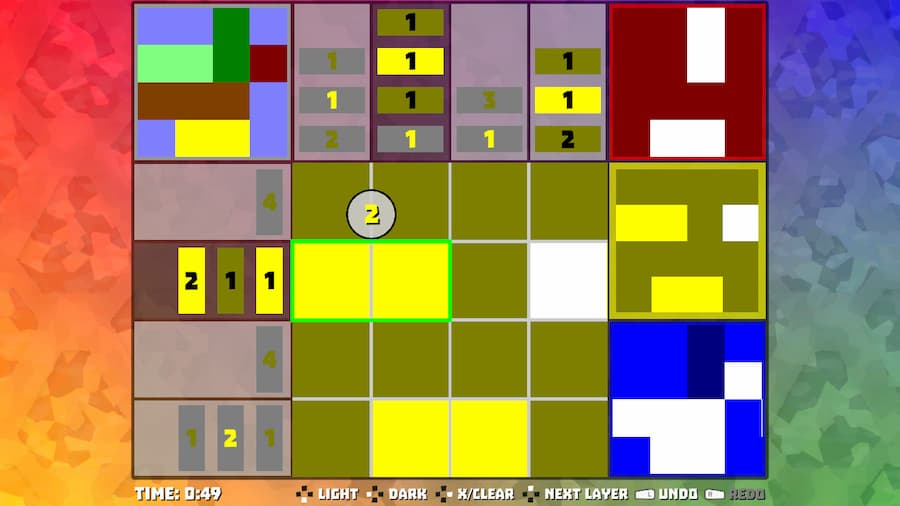 Obviously, your enjoyment of Depixtion depends on how much you like Picross puzzles to begin with. They’re an acquired taste, but you’re here, reading this review, so I’m going to assume you’re already interested in the puzzle format. Since the act of completing a puzzle of this type is broadly the same no matter where you’re doing it – on paper, on your games console, on your phone – the only real differentiator is how you navigate the grid and input colour. I’m happy to say that Depixtion is a pleasure to control. Despite puzzles having two colours each, there’s no awkward switching; each colour has its own button assigned to it, and it makes the whole process much more streamlined and enjoyable.

The finished pictures themselves leave a lot to be desired, however, especially in Depixtion‘s earlier puzzles. But it’s to be expected; it’s pixel art made up of 256 squares or less. Without the labels, I doubt I’d be able to tell what most of them are. They do become clearer as you progress onto later, larger puzzles, and it’s hardly a deal breaker anyway. I don’t know about anyone else, but I don’t really ever care what the finished picture is. It’s all about the journey. 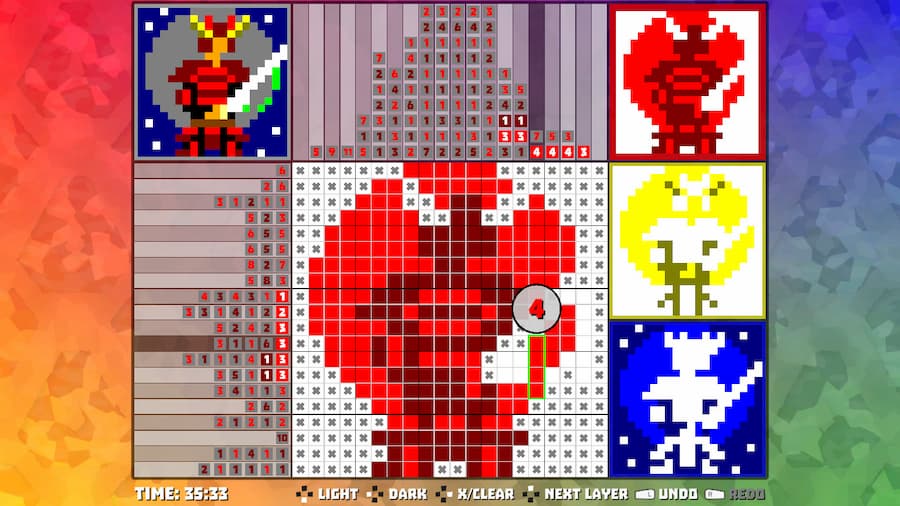 Like most Picross titles, Depixtion eases you in gently. If you’re new to the format (or have never done colour-based Picross before), there’s a tutorial to show you the ropes. The first round of puzzles are 4×4 in size, before graduating to 8×8, 12×12, 16×16, 20×20 and, finally, 24×24. The larger puzzles provide a real meaty challenge, but be warned if you’re playing handheld; it can be hard to see the numbers clearly, and there’s no option to zoom. I also had a tough time distinguishing colours when playing docked. Each puzzle has two shades of the same colour, and while they’re easily distinguishable on the Switch’s screen, it wasn’t the case on my TV. Likely I just need to tinker with my brightness and contrast settings, but it’s worth noting – especially as I imagine this will have an impact on colourblind players.

If you’re a Picross fan, there’s a lot to like in Depixtion. It’s a worthy addition to an ever-growing picture puzzle library on Switch. The nice twist on the colour format makes it feel like something slightly different, and its intuitive controls and easy-to-navigate menus make it one of the better options out there. For $7.99, it provides excellent value for money, too – it’s just a shame it’s missing a couple of accessibility options.

Depixtion is available on PC and Nintendo Switch. We reviewed the Switch version.