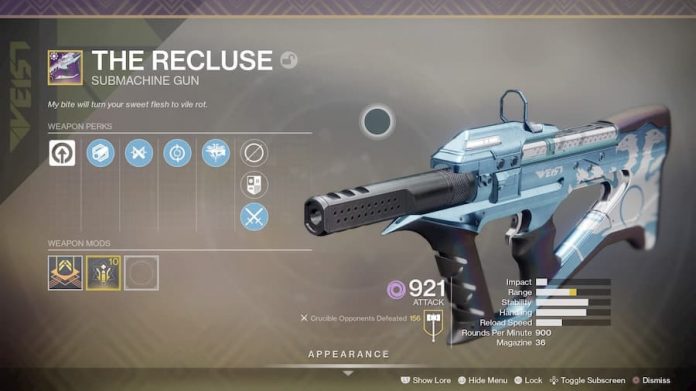 Though Pinnacle weapons in Destiny 2 have suffered a bit over the past few seasons in terms of raw power, the all-mighty Recluse is still worth the effort, even after its nerf.

Throughout Destiny 2’s long road, few weapons struck fear and awe into opposing Guardians in Crucible the same way the Recluse did.

Though Bungie has tweaked the weapon off its pedestal of ungodly power, the weapon is still a beast. If you’ve somehow missed this weapon, or never worried about grabbing it until now, here’s everything you need to know about getting the Recluse in Destiny 2. You better get ready for a bit of a grind, though. Shaxx won’t settle for less.

Recluse Quest: How to Earn the Recluse in Destiny 2

You’ll be diving headfirst into the wonderful world of Destiny 2‘s Crucible for the Recluse, so be prepared to alter your loadout to best suit a PvP experience. The actual quest for the Recluse is quite simple on paper. To start the Recluse quest, head to the tower. From there, you’re going to want to take the following steps.

First, visit Lord Shaxx in the tower and collect the “From the Mouth of Babes” quest. This quest will tell you to accomplish a triumph called “The Stuff of Myth” which has two parts: 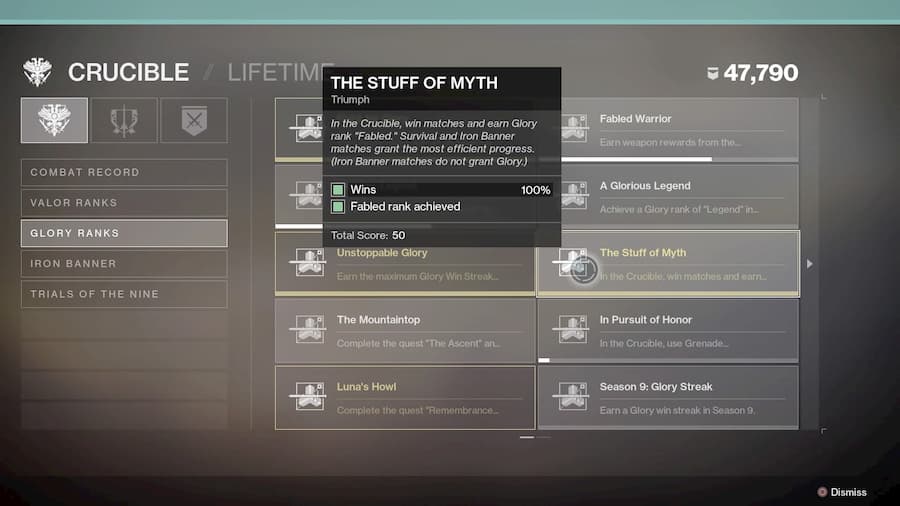 Like I said, on paper this quest is simple and easy. But Destiny 2‘s Crucible can be a nightmare, especially for those who are generally PvP-adverse. In terms of winning matches, you should be prepared to win anywhere from 30-50 matches, roughly. Reaching Fabled rank will come naturally over time. The Crucible Glory ranks are, in order, as follows:

As you can see, there is a decent amount of work to be done to reach Fabled rank. But once you hit that rank, you’ll have that part of the triumph locked in, so you don’t have to worry about losing it. The climb from Guardian through Brave III isn’t that bad, but once you hit Heroic I, the grind can become a bit tough.

Why is the Recluse in Destiny 2 So Good?

It all comes down to the perk combination of this weapon. Its unique perk, Master of Arms, gives the weapon a damage boost anytime you kill an enemy with it, allowing you to hose down weaker enemy hordes in PvE or chain together some solid damage in PvP. Outside of that, Feeding Frenzy will also significantly boost your reload speed after a kill, making it easier to keep pressure on the enemy in focus.

Though the Recluse can shred through enemies, it does have a pretty harsh kick for the SMG-uninitiated. Be ready to try and control this one through the first few games, as you get used to the kick.

It won’t be a short or easy journey, necessarily, but learning what needs to be done is certainly easy to get through. Now that you know how to get the Recluse is Destiny 2, it’s time to step into Lord Shaxx’s domain and better yourself!