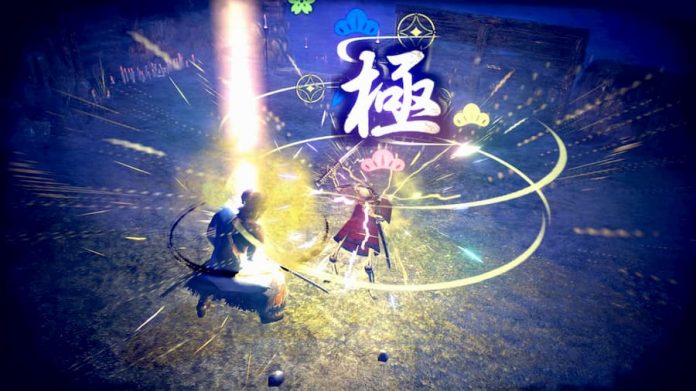 I remember my first encounter with the Way of the Samurai series.

Way back in 2002, the original Way of the Samurai blew me away. Arriving in the sparsely populated Rokkotsu Pass as a wandering rōnin going by the name of Kenji, of course I enjoyed the game’s combat, but it was the branching storyline that really impressed. Reaching an ending didn’t take all that long, but you could dive into it again, make some different choices, and experience something totally new. At the time, it was a breath of fresh air.

The series has changed quite a bit since then, and so here we are with a spin-off that changes the gameplay more then ever. Katana Kami: A Way of the Samurai Story still lets you make some important decisions, but its more fantastical nature sees the gameplay turned into a dungeon crawl. You’re not roaming Rokkatsu Pass during the day, taking down miscreants and rescuing people in need before heading off for a good night’s sleep. Instead, your days are spent crafting swords and fulfilling orders, and your nights stepping into a mysterious tree to explore hostile lands.

Your journey begins when you enter Rokkatsu Pass to find a blacksmith’s daughter being kidnapped. It turns out he owes money, and being the kind samaritan that you are, you offer to help get his daughter back. Though perhaps your intentions aren’t all so good after all; in return, you want his daughter for yourself. Still, the blacksmith agrees, and so from that point on you find yourself working with him. He provides a bed for you to sleep in, places to store your items and cash, and his blacksmith skills.

The first night you lay your head down in your new lodgings, something weird happens. A tree outside the blacksmith’s house glows, and there appears to be an entrance. So of course you go in. It’s clear pretty quickly that you’ve stepped into something that isn’t really of this world. There are hostile creatures that shouldn’t exist, and one floor simply gives way to another. It’s a dungeon that is seemingly endless. Still, there’s loot to be had, and every once in a while it is possible to return back to the real world with everything you’ve obtained. 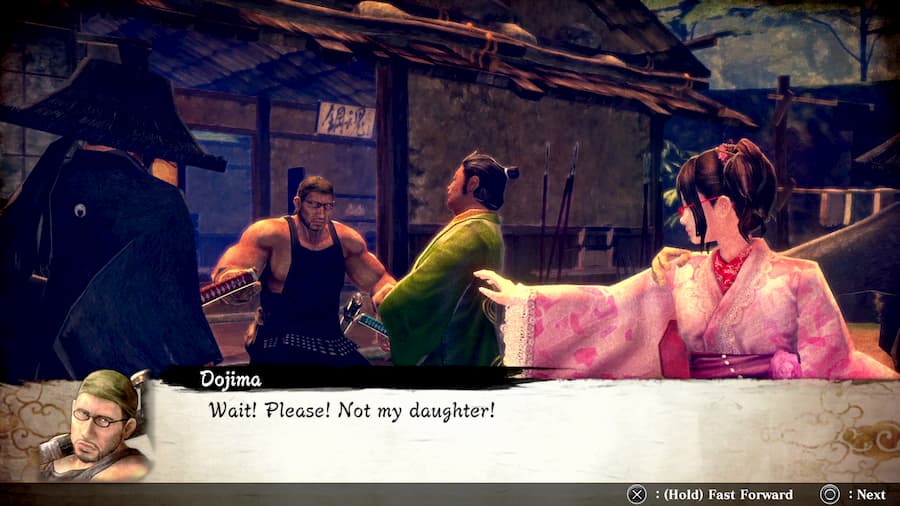 Leaving the tree, you’ll find that it’s daytime again. Any materials that you’ve picked up can be given to the blacksmith, swords can be added to his stock, and anything you want for yourself can be placed in storage for safe-keeping. It’s a good idea to bank any money you’ve found as well, as it’ll come in handy when the debt collector comes around. The less things you’re carrying when you make a return visit to the mysterious tree dungeon the better; if you die while exploring, you pretty much lose everything.

You start out with just a sword in Katana Kami: A Way of the Samurai Story. By killing enemies in dungeons you level up, improving your stats, but whenever you leave, be it via death or portal, your level is reset. What doesn’t get reset, however, is the status of the equipment you’re carrying. So, keep using your sword, or any of the others that you find or craft on your adventure, and they’ll also level up, enabling you to make quick work of earlier stages of the dungeon when you inevitably return. 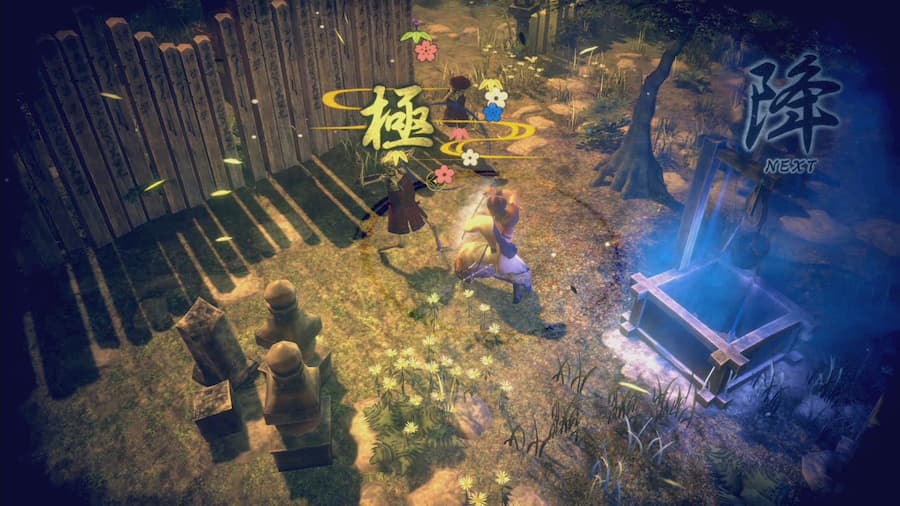 Swords aren’t the only weapons you have access to; you can also make use of bows and knives and one or two others. By visiting a blacksmith, they can be made sharper and more durable if you have the necessary materials. They can be given titles, too, imbuing them with bonus effects. It’s easy to get attached to your best weapons; you’ll get used to their extended movesets as a result of spending so much time with them. Be defeated while in the dungeon, however, and your trusty tool of death will be gone, along with anything else useful you were carrying. You’re forced to start again from square one with your tail between your legs – unless you have decent items in reserve in your storage, that is.

The more you play Katana Kami: A Way of the Samurai Story, the more it opens up. First, a vending machine appears near the blacksmith’s; there, you can buy valuable items such as those that prevent you from losing your items if you die in the dungeon. Then, a spy might appear who’ll pass on gifts to the kidnapped damsel if you play your cards right. Build up enough rep with the three factions found in Rokkotsu Pass, and you might find some more facilities becoming available, too, such as a shop where you can sell unwanted items.

Being a dungeon crawler, there is always the danger of the action getting stale. Combat is fast-paced and quite fun, however. There are nine fighting styles to keep you on your toes, new techniques are unlocked frequently, and you’re rewarded for skilfully parrying attacks by being able to perform powerful counters. You can also enter a powered-up state to overcome sticky situations providing a gauge is full, and there’s online co-op functionality. You might get bored of exploring Katana Kami: A Way of the Samurai Story‘s dungeons eventually, but it’ll take a fair while.

Katana Kami: A Way of the Samurai Story‘s faction system allows you to be a shrewd businessman, too. In fact, it welcomes it. Being a blacksmith, your skills are, of course, of greater need when there is conflict. So, it pays to create some friction between the factions now and again to bump up trade. Be careful though, as you want your blacksmithery business to be on good terms with everybody. Don’t let anything come back to bite you in the bum. Also, make sure your boss doesn’t overdo himself either, as nothing good will come from him being stressed. 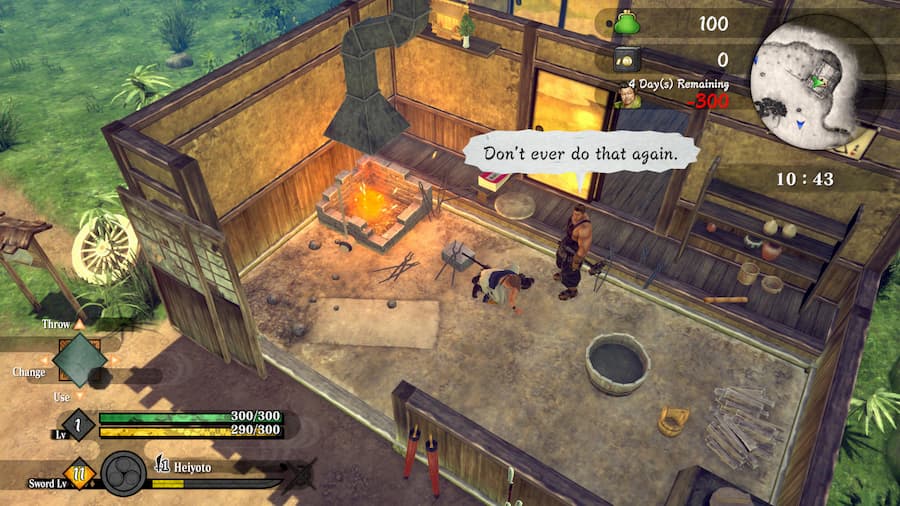 I’ve been playing Katana Kami: A Way of the Samurai Story on Switch, though it’s also available on PS4 and Steam. It’s not a particularly good-looking game, even less so on Switch, but I’ve not had any performance issues. The nature of the gameplay means that it suits the Switch quite nicely; you can fit in a quick bit of dungeon crawling during a commute or when you’re in bed thanks to its handheld nature

You’re not going to blown away by Katana Kami: A Way of the Samurai Story. Don’t expect it to amaze you in any way. It is, however, a very enjoyable dungeon crawler that’s very easy to sink time into. Developing powerful swords and using them to get further into a cavernous dungeon is as engrossing as you’d expect it to be. And the fact that those swords could be lost at any moment should you suffer defeat adds tension. This isn’t the Way of the Samurai experience you’re probably used to, but it’s just as entertaining nonetheless.

Katana Kami: A Way of the Samurai Story is available on PS4, Switch and PC. We reviewed the Switch version. 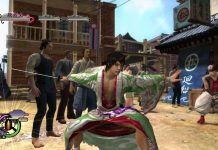 Way of the Samurai 4 Review