Check out the new games you should be getting excited for, and which will be getting a tearful farewell on Xbox Game Pass this month.

Xbox has announced that the Game Pass will be getting three new titles this February.

Dropping today, February 6th, we have big hair and big swords on a big road trip – it can only be Final Fantasy XV; plus we can start tearing up some Nazis with the Blazkowicz twins in Wolfenstein: Youngblood.

Next week on February 13th we’ll be getting the indie co-op puzzler Death Squared, in which one, two or four players must guide robots to the correctly coloured goals while avoiding deadly traps and obstacles.

And now the bad news. We’ll be saying goodbye to a few great games this month too, namely Disney Epic Mickey 2, Jackbox Party Pack 2, Pumped BMX Pro, Rage and Shadow of the Tomb Raider. So you’d better try these out pretty quickly if any of them were on your radar, and if you want to keep playing after they’ve disappeared from Game Pass you can use your member discount to get 20% off.

For more information including Xbox Game Pass quests, game updates and member benefits for the month of February, head over to the Xbox News site. 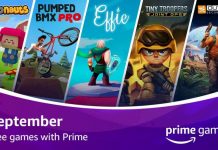