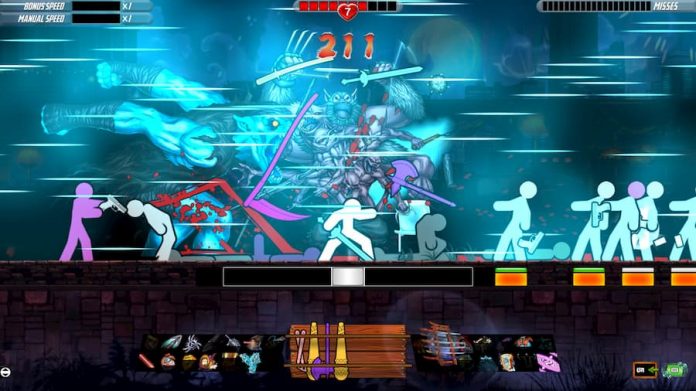 I’ve been aware of One Finger Death Punch for a while, mainly because it’s one of the highest-rated games on Steam. I’ve never played it though – but after spending some time with its sequel on Xbox One, I’m kicking myself for not jumping in sooner.

You see, One Finger Death Punch 2 is, in a word, awesome. Who knew a game that requires minimal button inputs to control a stick figure could be so much damn fun? Well, it is.

On console, One Finger Death Punch 2 might not be the most appropriate name. The only two buttons needed to play the game are two face buttons – on Xbox, B and X – so it’s more like ‘One Thumb Death Punch’. I suppose it doesn’t have quite the same ring to it. You’re not simply punching your enemies to death, either. You can kick, slice, whack, bludgeon and shoot your foes – along with some other hilariously ludicrous ways to slay them.

Its gameplay is most akin to a music rhythm game, only one that isn’t bound by a soundtrack. Your character, an unnamed stick figure fighting machine, stays in the middle of the screen while enemies pile in from the left and right. Under your character is a bar, and only when enemies enter that bar’s area can you attack. As your sensei-style voiceover tutor will tell you, do not button bash; One Finger Death Punch 2 is a sweet, violent ballet of destruction that relies on you having quick reactions.

As enemies approach you from the left, you need to press X (i.e. the left face button) to attack them, and as they come from the right, it’s B (the right face button). Aside from pressing up/down on the d-pad if you want to manually change the game’s speed, playing One Finger Death Punch 2 requires no more input. Not every enemy takes just one hit though: some require multiple attacks with the same button, while others will dance from side-to-side. Others initiate a quick-press minigame that requires you to hit the right buttons in the right order before the time runs out. Needless to say, every battle keeps you on your toes. 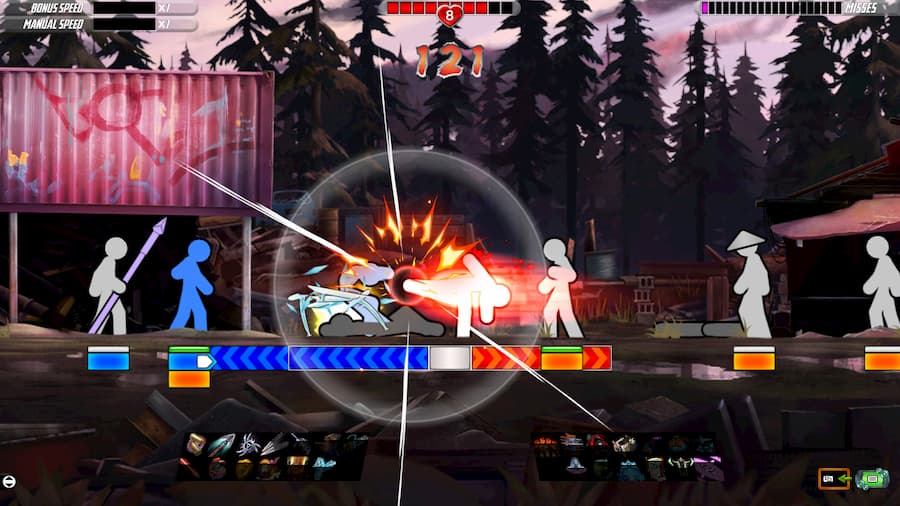 What’s perhaps most impressive about One Finger Death Punch 2 is the sheer amount of content the game throws at you. For a title that costs £7.49/$8.99, there’s tens of hours of entertainment here. A huge campaign mode will see you travel through numerous levels of increasing difficulty, collecting skill points to allow you to unlock special abilities. There’s also a co-operative mode if you want to play tag-team with a friend, an endless survival mode that challenges you to rack up the highest score possible and, perhaps my personal favourite, ‘No Luca No’ mode. Let’s just say anyone who owns a cat will get a huge kick out of that one.

One Finger Death Punch 2‘s Steam page reads: “You can’t get a feel for the gameplay from watching videos. The flow of combat is something we spent years tweaking. It’s what makes OFDP2 unique. Only by playing it will this become clear.” I couldn’t have put it better myself. It’s a game that you can’t fully comprehend until you’ve tried it yourself. It’s merely a game where you push the same buttons to kill stick figures, you might think. But that’s hugely reductive. For such a simple-looking concept, there’s a hell of a lot of depth here.

For one, One Finger Death Punch 2‘s huge range of weapons and power-ups available means that no two levels ever feel the same. Sure, you might be pushing the same two buttons again and again, but round-housing a string of opponents feels so much different than shooting down a line of incoming attackers with a rifle. Then there’s the special abilities: occasionally, you’ll find yourself on the back of a horse, beheading enemies as you gallop past them. Or you’ll find yourself accompanied by a number of bouncy balls of doom, travelling back and forth on your screen, decimating enemies with each bounce.

It provides the sort of addictive gameplay loop that you think you’ll get bored of after 10 minutes – yet four hours later you’re still there, continuing to decimate stick men with a huge grin on your face. Seriously, One Finger Death Punch 2 is a hell of a lot more fun than it has any right to be. And for such a cheap price, there’s absolutely no reason to not give it a go. And if you don’t believe me, there’s a free demo available on Steam to take it for a spin yourself.

One Finger Death Punch 2 is available on PC, PS4, Xbox One and Nintendo Switch. We reviewed the Xbox One version.