Its name might be a bit of a mouthful for a game you’ve never heard of before. There’s reason for that: while this game is Snack World’s first outing in the west, it’s a franchise that’s been around since 2015 in the east. There’s been a 3DS game, a manga, an anime series and even a line of toys. Snack World: The Dungeon Crawl – Gold, then, is a localisation of a Switch game from 2018, that itself was an expanded port of a 3DS game.

But you don’t really need to know any of that to enjoy the game. All you need to enjoy Snack World is the ability to turn off your brain and have a bit of fun.

That’s the key here: Snack World: The Dungeon Crawl – Gold doesn’t take itself seriously. It’s stuffed with jokes from start to finish and every line of dialogue reads like a groan-worthy localisation or a joke aimed at an eight year-old. Expect poo references galore. Some of it will also go over younger players’ heads: a coffee shop called “Kovfefe” and some very gay genies who make an eyebrow-raising comment about lube. It’s all very silly, but that’s part of its charm.

Whether or not you’re on board with Snack World‘s japes, it’s much more difficult to avoid the lure of its gameplay loop. As the game’s name suggests, this is a dungeon crawler. It’s a pretty simple one, but the core ingredients are all there: a wealth of monster types, weapon and gear upgrades and, most importantly, loot. So much lovely loot. Snack World: The Dungeon Crawl – Gold is mission based, with each quest taking you to a confined location. Sometimes it’s a fairly small, open area where you’ll simply have to clear all enemies or fight a particular foe. Other times it’s a winding, labyrinthine dungeon, with a map that unlocks as you explore. These can be multi-level, and usually lead to a boss fight. 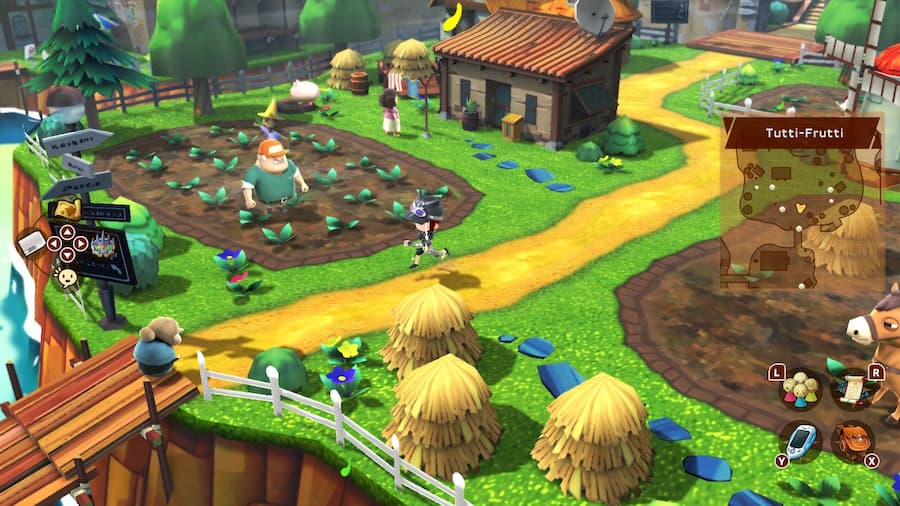 Combat is quirky, but fairly simple. You have a range of weapons to use that can be switched on the fly. Each weapon has two or three enemy types that it’s more effective against, so the game will prompt you to switch depending on the foe you’re fighting. Aside from a couple of special attacks that can be doled out in moderation, fighting is pretty much a case of hitting the attack button and utilising the dodge-roll to avoid incoming attacks. It’s fun enough, but doesn’t require a great deal of skill.

It can also be pretty messy. When out on a mission in Snack World: The Dungeon Crawl – Gold you can be accompanied by up to three ‘snacks’ – past adversaries you’ve befriended who now fight alongside you. Some missions may also have a NPC tagging along, too. Including your own, that’s up to five characters on-screen at any one time, chopping their way through enemies. Considering that corridors in dungeons are often narrow, and enemies can spawn in groups of half a dozen or more, it can be very hard to see what’s happening. Often you just have to hammer ‘attack’ and hope for the best. 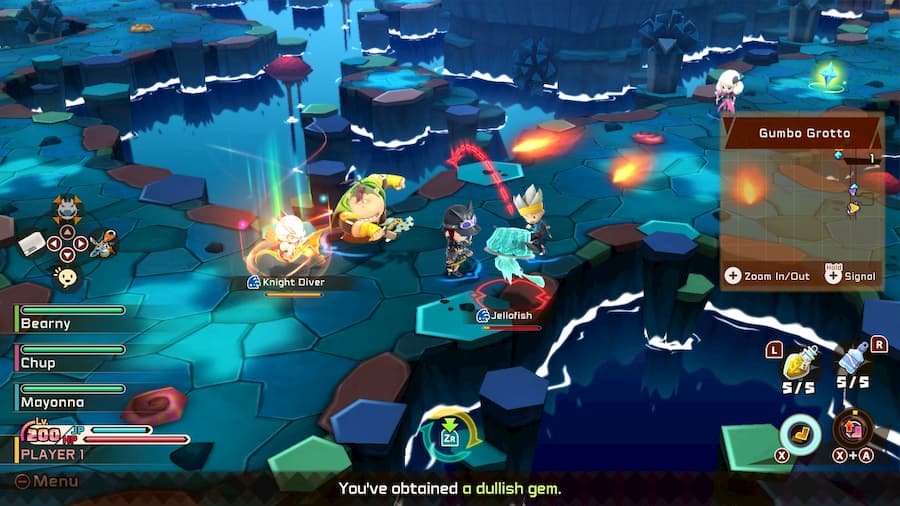 As someone who generally despises boss fights in video games, it surprises me to say that here, they’re actually alright. Clear cues have been taken from platforming bosses of old; you’ll have to look out for a pattern of attacks, dodging and attacking at the right time. But the giant foes – like all enemies in the game – are excellently designed. Bosses put up a good battle, keeping you on your toes throughout.

The true lure of Snack World, though, is its loot. Sweet, sweet loot. It isn’t quite Diablo-level greatness, but you’ll collect plenty of items in any given dungeon. You’ll find consumables that can give you temporary boosts and useful perks, currency (that’s ‘gravies’, for some reason), or occasional pieces of armour or weapons; but most often, you’ll find pieces of material. A big element of Snack World: The Dungeon Crawl – Gold is upgrading and crafting. You can craft new pieces of gear (headwear or outfits; essentially armour) and upgrade your weapons, known as ‘jara’. Doing so requires various materials that you’ll accumulate while playing through dungeons. Finding the material you need can often be laborious – but it’s also the motivation that keeps you playing. That’s true of any game of this ilk; it’s the lure of the potential loot that keeps the gameplay loop worthwhile. 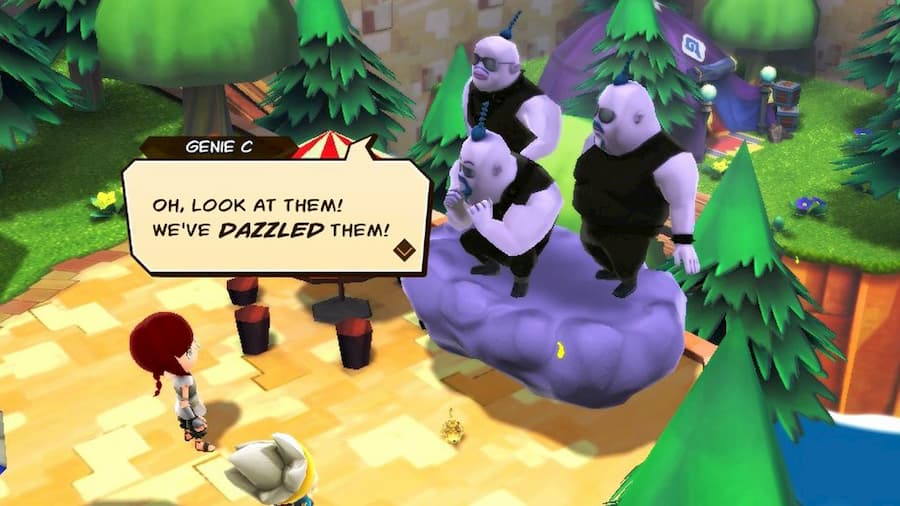 It’s brash, it’s messy at times, and it’s not exactly a good-looking game, but I can’t help but like Snack World: The Dungeon Crawl – Gold. Its silliness is endearing, its larger-than-life characters will make you chortle despite yourself, and even if you’re not an immature child, come on – it’s hard not to laugh at a negative status effect that makes your character constantly fart. It’s a title that proves to be excellent value for money, too. The main campaign will take you at least 25-30 hours to beat, and if you’re having fun, dozens more hours can be sunk into end-game content. As long as you don’t want it do, the quest for better gear never ends.

Want to support GameSpew? Buy Snack World: The Dungeon Crawl – Gold using our Amazon affiliate link. It won’t cost you anything extra, but we’ll get a small slice of the purchase.

Can You Play Snack World: The Dungeon Crawl – Gold in Local Co-op? 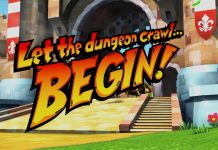 How to Upgrade Weapons in Snack World: The Dungeon Crawl – Gold