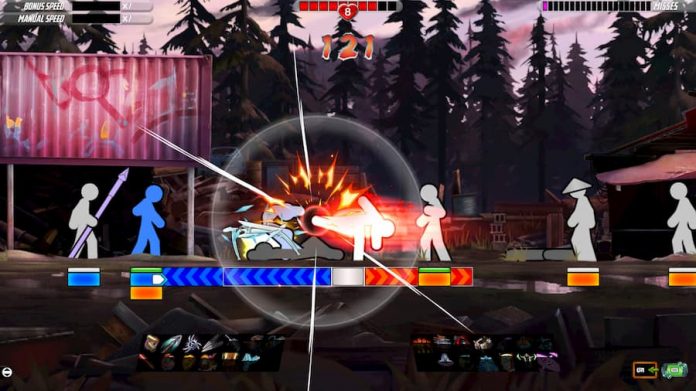 It’s been a busy one here at GameSpew HQ, with lots of games already crawling out of the woodwork, demanding we play them and give them our attention. At least for the editors. Here’s what the whole team has been up to.

Rich: If you didn’t know, I love a bit of horror, so playing through Infliction: Extended Cut with Kim watching last weekend was a pleasure. It’s short and a bit rough around the edges, but if you’re a horror fan it’s well worth checking out. For the most part of last weekend, however, I was beavering my way through the Mega Man Zero and ZX games. As retro collections go, Mega Man Zero/ZX Legacy Collection ain’t half bad.

Other than that, it’s been a busy week, as usual. I collected my thoughts on the Switch port of Metro Redux which I’ve been playing a while, and I also got acquainted with the Switch port of Samurai Shodown. The former is brilliant. The latter, less so. My Switch got further hammer thanks to Bloodroots, too, which is a good Hotline Miami-style brawler, but not really suitable to be played in handheld mode.

And finally, I put as many hours into Overpass that I could before I lost the will to live. Honestly, it’s not very good. I like what it tries to do, but the execution is lacking. It’s a shame.

Kim: I’ve had quite the assortment of games on my desk this week. I’ve sank numerous hours into Depixtion, a new colour Picross game to land on Switch (it’s pretty good, if Picross is your bag). I’ve played far too much One Finger Death Punch 2, which is just pure joy. I’ve played a preview build of Gigantosaurus: The Game, a kiddy game launching next Month that I’m not ashamed to admit I had fun with. And I’ve enjoyed the Zelda-like Knightin’+, even if it is a little basic.

Mostly, though, I’ve been slaving away in the medical profession. That’s right; I’ve been playing Two Point Hospital on Xbox One. It’s an absolute pleasure; more than a spiritual successor to 90s classic Theme Hospital, it essentially is Theme Hospital. And it’s all the better for it. Sadly I’ve killed more patients than I’d care to admit, but hey, you win some, you lose some.

Becca: It’s been another crazy week this week where I haven’t much time to hunker down and play a bunch of games. But I did play the adorable and challenging puzzle game Path of Giants. My article on the game also happened to be my 1,000th article on GameSpew! Thank you, thank you. In the game you play as three intrepid adventurers on the hunt for treasure. Controlling all three at one time can get a bit crazy, but it’s worth it in the end when you solve those difficult puzzles.

I also started playing Broken Age with my best friend. I’ve played two or three times before, but they never have so I was excited to give them a chance to see why I love the game so much. They’re super into the story and hopefully, as things progress they’ll enjoy it even more.

Kim and I have also dipped our toes into Wolfenstein: Young Blood. We’re god awful at it, dying almost constantly, but (and I can’t speak for Kim) I think we’re having a good time with it [Can confirm – Kim]. I’m overwhelmed by the different upgrades, but the story is interesting and the main characters are silly.

Diggy: I know I’m roughly a decade late to the party at this point, but this week I finally got into Minecraft. The previous times I’ve dipped my toes into Mojang’s creativity toy have usually ended with me not knowing what the hell to do, giving up, then building an endless staircase into the sky with the mountain of dirt and cobblestone I’d amassed.

After a touch of direction from someone with more mining and crafting experience than I; a few hours go by and I’ve got my own farm, a cute lil’ house, a swimming pool, a roof garden, several sheep, a turtle and an underground mine in my basement. I barely even have to worry about the exploding green phalli any more.

Chris: It’s been a relatively quiet week for gaming. I’ve been clearing out my cupboards, getting rid of a bucket load of bric-a-brac. I did intend shifting some of my games but I didn’t manage to ditch a single one. What was sobering, and a tad depressing, was how the games I’d paid £40 for and have yet to touch are now worth a fraction of that price.

I did delve into Sony’s current PlayStation Store sale and came away with Street Fighter 30th Anniversary Collection. I’m a little disappointed it doesn’t included any of the hacked versions I played as a kid, no doubt due to legal versions, so I didn’t get to see Zangief spew fire from his ankles or switch character at the press of the button. But it’s still a great trip down nostalgia lane.

Stan: It’s been a week of changes for me. New friends made. Old friends lost. Memories never forgotten. Yup, that’s right, I finished my third run through of Grand Theft Auto 5. I chose option C, and absolute carnage ensued. Federal agents, street gangsters, and even real gangsters all died to ensure that Franklin, Trevor and Michael didn’t. In fact, I’ve never chosen another option – I just don’t have the heart.

And speaking of heart, that’s exactly what my Portsmouth players showed in Football Manager 20. Not only did they get promoted to the Premier League, but they clinched the title on the final day! Leeds were ahead with 2 points, but a 3-2 loss to Charlton meant that Pompey finished as champions! 30 million pounds spent later, we played our first game in the Premier League…and lost 7-1 to Man U.