There’s a lot of stressful stuff happening in the world right now, and it can be hard to feel cheerful.

Videogames offer a good escape – but even those can add to our stress levels by being too difficult, too dark or too depressing. Not all of them, though. There are plenty of bright, happy games out there that offer a great pick-me-up when you’re feeling low. We’ve rounded up 13 of the happiest games we could think of. Give them a try if your day needs brightening – we challenge you not to play them without a smile on your face.

Stardew Valley‘s a great happy game because, unlike most videogames, you don’t have to play by the rules. A little like an open sandbox, you can approach Stardew Valley however you see fit. The game revolves around a farm you’ve just inherited, which you can cultivate and grow into a beautiful, thriving business. But you don’t have to. You can bum around town, talking with villagers, engage in a spot of fishing or treasure-hunting if you prefer. It’s all entirely up to you. And it’s brilliant. If you’re feeling under the weather, paying a visit to Stardew Valley is bound to cheer you up.

Read our review of Stardew Valley | Buy on Amazon

The LEGO Movie’s theme tune is “Everything is Awesome”. And it’s hard to not feel like everything is awesome when you’re playing the accompanying LEGO Movie Videogame. Retelling the story of the film, you’ll play through numerous levels, destroying bricks, finding collectibles, dancing with Unikitty and all that other fun stuff. All LEGO games are instant pick-me-ups, but few are as happy as The LEGO Movie Videogame. Even when the evil Lord Business shows up, it’s still hard to feel too bad about stuff.

Kick, punch! It’s all in the mind! PaRappa the Rapper is a classic – and thanks to a remaster a few years back, it’s readily available to play on PS4. Okay, it’s not the longest game in the world, but that’s partly why it’s such an excellent game to cheer yourself up with: stick it in, and in less than an hour everything will seem so much better in the world. We love PaRappa and his friends, and this will always be one of our go-to happy games.

Read our review of PaRappa the Rapper Remastered

Available on PC and Switch

If you’ve never played a Katamari game before, you’re in for a treat. They’re some of the happiest, most joyous games out there. Well, providing you’re not actually a NPC living in the game, that is. In Katamari, you take control of The Prince – a green guy with a funny-shaped head. He’s got a Katamari, a type of ball that he rolls around, collecting pieces of ‘stuff’ as he goes. As he rolls, the ball gets bigger, allowing you to collect more and more stuff. Katamari Damacy REROLL is a remaster of sorts, taking some of the best levels of previous Katamari games and combining them. Give it a roll (pun intended); you’ll not be able to wipe the grin off your face.

Read our review of Katamari Damacy REROLL | Buy on Amazon

The latest game from Media Molecule, Dreams is a lot of things. It’s a game creation tool, but it’s also a library of other games – stuff created by users, as well as some games created by Media Molecule itself. There’s a lot to see and do. If you’re the creative type, getting lost in the game’s creation tools, building your own world, creating a piece of art or even a fully-fledged game can be a lot of fun. But if you’d rather just enjoy what other people have to offer, you’ll unlikely be disappointed. There’s a huge range available, and being able to witness other people’s creativity so easily is a heartwarming and happy experience.

How can you not feel at least a little happy when you’re staring at that wonderful blue hedgehog? It’s impossible. Sonic Mania is perhaps the best Sonic game we’ve had in the last decade or longer: it re-imagines classic 2D Sonic as we remember him. Perhaps even better than ever, if we dare say so. If you loved Sonic games on your Mega Drive or Genesis back in the day, Sonic Mania is going to put a smile on your face.

Read our review of Sonic Mania | Buy on Amazon

Mario’s biggest and best outing yet, Super Mario Odyssey is a game packed with heart and soul. Mario’s worlds are bigger, brighter and happier than ever. And his cheeky spirit – accompanied by the delightful Cappy – is bound to brighten your day. Even if you’ve never particularly been a Super Mario fan, there’s something incredibly endearing about exploring Super Mario Odyssey‘s worlds. There’s so much to see and do – and you won’t feel sad while making your way through it all.

Read our review of Super Mario Odyssey | Buy on Amazon

A cartoon-style adventure set at Halloween? That has you following a group of kids in fancy dress costumes? What’s not to love about Costume Quest 2? This game will keep you busy for only a handful of hours, but in that time you’ll be grinning like a loon as you make your way through wonderfully designed environments, getting mixed up in all manner of madcap adventures. It’s a definite go-to happy game thanks to how damn adorable it is.

Ah, Yonder. A delightfully happy game that makes for a great reprieve from the stresses of everyday life. It’s an open world adventure game, but one free of any kind of combat or conflict. Honestly, it’s impossible to feel stressed while playing Yonder. Wander around its beautiful vistas, talk to NPCs, run a few missions and even do a spot of farming. You’ll finish Yonder in five hours or so if you run through the story, but the real joy is in taking your time and simply enjoying everything it has to offer.

Read our review of Yonder | Buy on Amazon

Available on PC, Xbox One and Switch

Just look at Pikuniku. Look at it. How could you possibly feel any other emotion other than elation and happiness playing a game about colourful blobs on legs? It’s an absolutely adorable adventure game that tasks you with solving problems, helping strange-looking villagers, and generally saving the world. It’s a happy-go-lucky game that will leave you feeling very pleased with yourself when you save the day.

The second you load up Untitled Goose Game, you’ll find yourself grinning from ear to ear. There’s something incredibly cathartic about being in control of a mischievous goose, and there’s a real reason why it took the world by storm when it released late last year. Not only does it look absolutely gorgeous, it’s a heck of a lot of fun to play too. As the goose, you’ll have to work your way through a checklist of activities that involve causing mayhem for the villagers of a small town. Steal a bra from a washing line, for instance, or nick a small boy’s toy plane and force him to buy it back from a shopkeeper. It’s nefarious stuff, but delightful, happy, nefarious stuff – if such a combination is even possible.

Available on PC, Xbox One and Switch

Look, okay, ‘One Finger Death Punch’ doesn’t exactly sound like a happy game. Happy things don’t usually contain the words ‘death’ and ‘punch’, especially not together. And so as a concept, perhaps One Finger Death Punch 2 isn’t that happy of a game – it has you kicking and punching your way through hordes of enemies, blood spurting abound. But if you forget about that part of it, and just enjoy the action of playing – boy, One Finger Death Punch 2 is an absolute joy. You’ll feel like an unstoppable machine are you chain together combos and fancy moves; there’s nothing else quite like it, and it’ll cheer you up no end.

Read our review of One Finger Death Punch 2

Being that Manual Samuel starts with the titular Samuel getting run over by a truck and dying, it doesn’t sound like happy game. But bear with us. After getting taken to the underworld, Samuel is brought back to life, and accompanied by the grim reaper. If he can get through one full day on Earth, completing his usual tasks, he’ll be brought back to life permanently. The catch? He’s lost all bodily functions, and so it’s up to you to control him. Manually. That means controlling Samuel’s arms and legs independently – and even telling him when to breathe and blink. It sounds like an absolute recipe for disaster – which is kind of is – but it’s hilarious as a result. Manual Samuel is laugh-out-loud funny, and will infinitely cheer anyone up of a case of the blues. 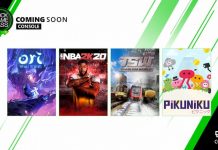 NBA 2K20, Ori and the Will of the Wisps and More are Headed to Xbox Game Pass This Month