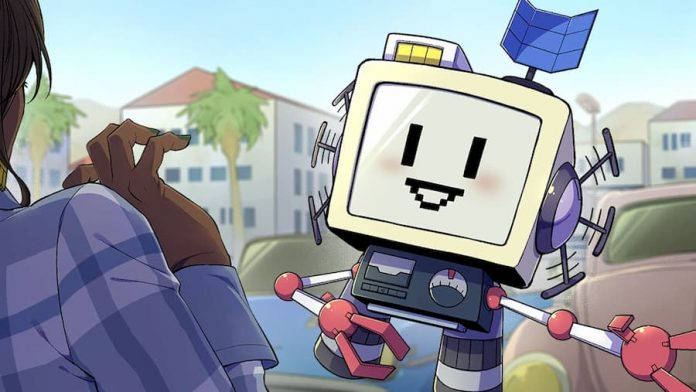 Your boss has just been murdered, minutes after telling you you’re fired. At the same time, you meet a mysterious floating, talking robot in the car park. All in all, it’s a weird day for Honor Mizrahi – and it’s only going to get weirder.

In a nutshell, that’s the premise of Murder By Numbers, a murder mystery visual novel-meets-Picross puzzler from Mediatonic. Spread across four cases, you’ll accompany Honor and her newfound robotic sidekick SCOUT as they find themselves mixed up in various murder scenes.

I’m a fan of Picross, so I was instantly interested by Murder By Numbers when it was first announced. The number-picture puzzles have always been a favourite of mine; the framing of an interesting-sounding story here initially seemed just like a bonus. Before playing, I expected to find myself quickly skimming over the story in order to get to the next puzzle.

In fact, it’s almost been the other way round. Murder By Numbers‘ story is so excellently written, brought to life with beautiful animation to boot, that I’ve found myself well and truly hooked. Each of the four cases tells a different story, introducing new characters along the way, but there’s a key cast that feature throughout. As you play, you’ll uncover more about Honor’s background, in particular her relationships with her meddlesome mother and detestable ex-husband who seem to keep showing up at the most inopportune of times.

I’ve found myself incredibly invested in the characters, and playing through the story quickly became the real draw of Murder By Numbers for me, the puzzles merely a welcome addition. Not only does each whodunnit-style chapter keep you hooked as you’re desperate to find out who the murderer is, the drip-feed of information about Honor, SCOUT and the other cast members draws you in, too. 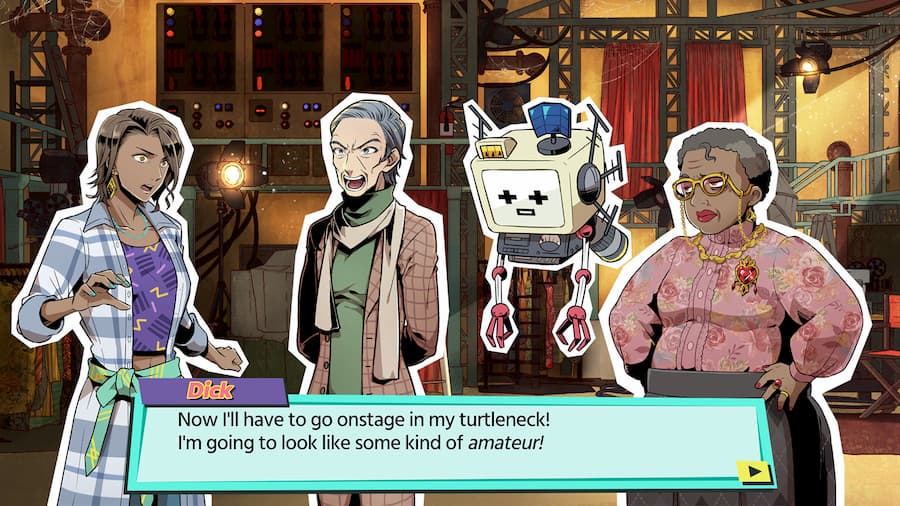 Honor isn’t a detective; she’s an actress. Or was an actress – although she did play a detective in her last role. It’s only by pure accident she found herself on a crime scene for the first time. With SCOUT by her side, she got a taste for crime solving, and so when she winds up near a murder for the second time, she just can’t help herself.

Most of the story of Murder By Numbers plays out in written dialogue, with you clicking through conversations between characters. You’ll regularly question people, asking questions to gather evidence – but there’s very little ‘choose your own adventure’ style gameplay here; you’ll generally end up asking all the questions, and even when it’s time for you to draw a conclusion, the game will steer you away should you try to make the wrong choice. It’s pretty linear, then, but it’s hardly a dealbreaker when the story and characters are as captivating as they are. 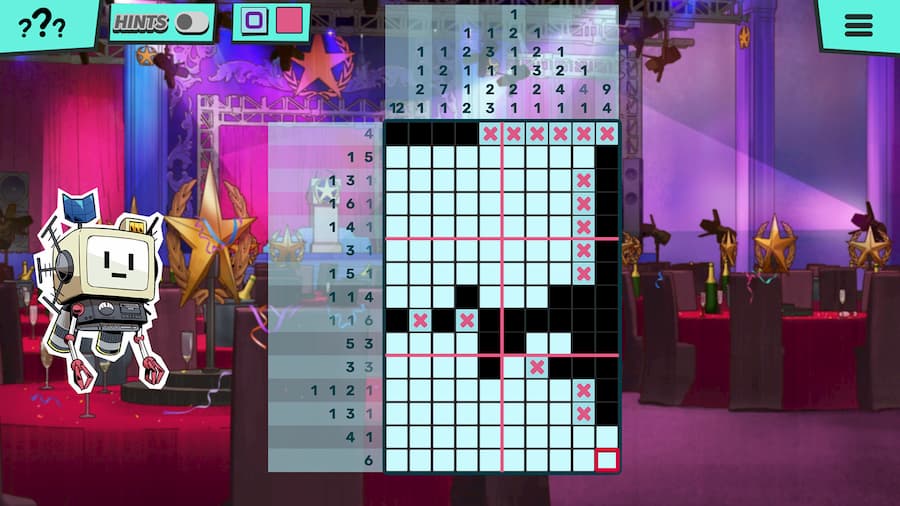 I absolutely fell in love with SCOUT, Honor’s peculiar robot companion, through my time with Murder By Numbers. He’s charming, endearing and funny, coming out with humorous one-liners and posing questions about humanity that can’t help but warm your heart. SCOUT’s the backbone of much of Murder By Numbers, honestly. The game’s LGBT-inclusive nature is refreshing, especially its third chapter that revolves around a bar owned by a drag queen. But it’s SCOUT, who innocently poses questions as he strives to understand the complexity of human beings, that really makes it great. He even questions his own gender at once point: “people refer to me as a ‘he’, does that make me male?”, he asks. “All that matters is how you feel. You are whoever you want to be,” comes the reply. To which, SCOUT proudly exclaims, “I am SCOUT!”. Warm and fuzzies all around.

There’s a healthy balance of story, detective work and puzzles throughout Murder By Numbers. Between talking to characters and interviewing witnesses, Honor and SCOUT will also scan environments for clues, and its through these scanning sections that Picross puzzles feed into the game. For each clue found, you’ll need to solve a puzzle, with the completed image representing whatever piece of evidence you’ve stumbled across. As you progress through each chapter, you’ll also increase your ‘detective rank’; each time you level up, you’ll unlock extra bonus puzzles that can be found in the menu. 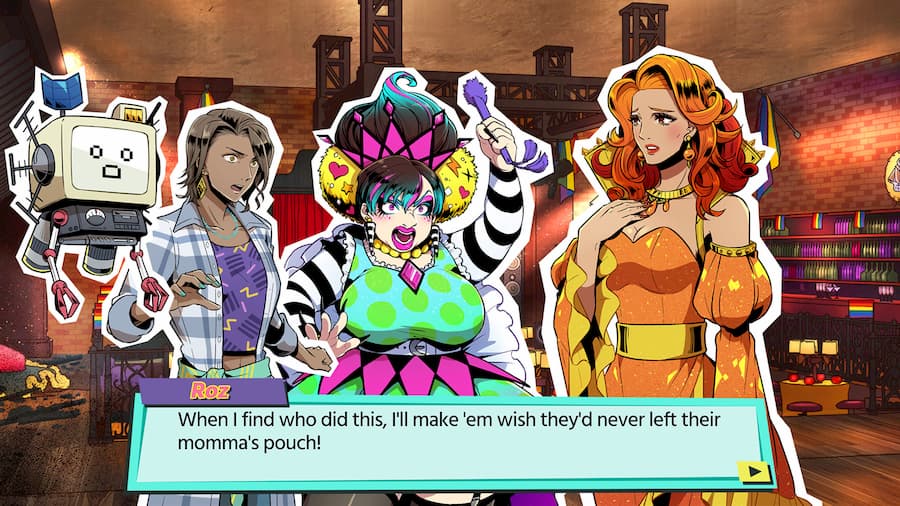 The puzzles themselves, though they start out easy, provide enough challenge for even the most weathered of Picross fan. There’s a healthy mixture of different sized-grids, with puzzles usually getting more complex as you progress through a case. You’ll also come up against a couple of twists on the formula, including some ‘against the clock’ puzzles that challenge you to solve a small puzzle in a matter of seconds without making any mistakes.

The only negative I can leverage onto Murder By Numbers – which is a criticism of the PC version only – is that it doesn’t contain controller support. It’s more of an issue considering the game is also on Switch, and that version naturally contains controller support – so why not the PC version? Yes, Picross is undoubtedly easier played with a standard mouse, but it’s much more fiddly should you be playing on a laptop or another device with a touchpad. Being able to plug in a controller would be much easier. It’s a small irk that ultimately doesn’t ruin the quality of the game, but it’s an irk all the same.

Whether you’re a fan of Picross, or whether you enjoy a good murder mystery, I can’t recommend Murder By Numbers enough. The stories it weaves are fantastically realised, brought to life with wonderful characters, genuine touches of humour and fantastic animation. Honestly, I’m sad there’s only four chapters (although each one will keep you hooked for at least 3-4 hours) – more please, Mediatonic. It’s one of the nicest, genuinely unique games I’ve played in quite some time.

Murder By Numbers is available on Switch and PC. We reviewed the PC version.