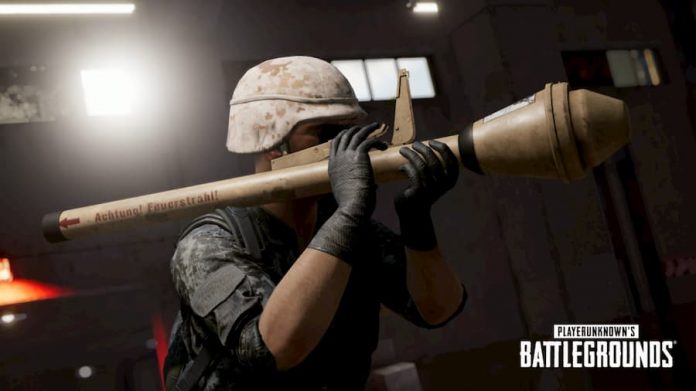 The destructive Panzerfaust has arrived in PlayerUnknown’s Battlegrounds, adding even more destruction to the Karakin map in Update 6.3.

Test servers are now live on the PC version of PUBG, letting players try out the new changes that are coming with the 6.3 update. The most exciting addition is the Panzerfaust, a powerful single-use rocket launcher exclusively found in Karakin, which can be used to destroy walls as well as enemies. Be careful though, the Panzerfaust is the first PUBG weapon to have a backblast, so you should be aware what’s behind you before you pull the trigger.

There has also been some weapon rebalancing done with M249, the Tommy Gun and the UMP-45. The M249 has been reduced in its ammo capacity, damage and stability but has got a new look, new sounds effects and new attachment slots. The Tommy Gun has been given a damage increase and a recoil reduction, and now has the ability to attach red dot and holo sights. Finally, the UMP-45 damage and bullet travel speed have both been increased.

Additionally, Update 6.2 is now live on PlayStation 4 and Xbox One, following its PC launch two weeks ago. Players on PS4 and Xbox are now able to invite each other into a single party, and the limited-time Team Deathmatch Mode is also available, in which two teams of eight face off in a desperate battle for victory. Update 6.2 also features a much-requested rebalancing of throwables, including frag grenades, molotovs, stun grenades and more.

Check out the new introduction trailer for Update 6.3 below, or head over to the PUBG website for the full patch notes on Update 6.3 and Update 6.2.