We rather liked 2018’s TT Isle of Man – Ride on the Edge. Its only real problem was that it didn’t have a great deal of content.

It’s perhaps unsurprising, then, that that’s one area where TT Isle of Man – Ride on the Edge 2 dramatically improves on its predecessor. Everything else that’s improved is just icing on the cake as far as we’re concerned.

KT Games has delivered its most engrossing career mode yet with TT Isle of Man – Ride on the Edge 2. You start out as a newbie with dreams of taking part in and winning the TT Isle of Man title, but to get there you’ve got to put the work in. And there’s one thing for certain: you won’t be doing it in your first season. If you’re good, you might get invited in the next season though.

“KT Games has delivered its most engrossing career mode yet”

Each season you’re presented with a calendar full of events, and it’s up to you to work through them as you see fit. What’s novel about TT Isle of Man – Ride on the Edge 2 is that instead of having a global difficulty level setting, your calendar generally offers up easy, medium and hard events, allowing you to chart a course through the current season relative to your abilities.

In your first season, for example, it’s probably best to just take part in easy events, though it will limit your chances of being invited to participate in the Isle of Man TT. That is, unless, you manage to put in a solid effort in the Irish Championship that runs throughout the season. Come first in an Irish Championship event, or at least close enough to the leader and you’ll get a signature. Get six signatures and an invite to the Isle of Man TT is yours.

Others ways to score an invite to the Isle of Man TT are to win the Junior TT, which isn’t an easy task, or simply earn enough rep. So, chances are you get invited eventually – you just need to keep plugging away at those seasons. And thanks to a decent number of new tracks, the introduction of classic bikes and a whole host of other improvements, that’s no hardship.

One of the best new features found in TT Isle of Man – Ride on the Edge 2 is the new free-roam area. You can drive around a recreation of a small piece if Ireland at your leisure, and as you increase your reputation challenges become available which test your skills. You might have to maintain a target speed for as long as possible, for example, or chase an opponent and then remain in front of them for a set period of time. It breaks up the serious action of season events quite well.

“You’re a part of a team, but this is also your personal journey. TT Isle of Man – Ride on the Edge 2 does a good job of conveying that”

Of course, you’re rewarded for your efforts, both on the track and off. Completing season events will net you money, rep and perks – they can be used to give you an advantage when you need them. Completing free-roam challenges, on the other hand, is a good way to get free upgrade parts for your vehicles, as well as other goodies. You’re always being rewarded in some way.

You’re forced to use your team bike for many events throughout your season, but you’re also given freedom to use any of those that you’ve bought yourself often enough. You can customise them too, with upgraded parts and new liveries. You’re a part of a team, but this is also your personal journey. TT Isle of Man – Ride on the Edge 2 does a good job of conveying that.

Outside of career mode the offerings are a bit scant, but there’s everything that you’d expect: Time Attack, Quick Race, Free Roam, and of course, Multiplayer. Needless to say, Career mode is the real draw here. If you do dive into multiplayer, however, you’ll find that you can take the action online, or play in Hot Seat mode when you’ve got friends around who also love a bit of TT Isle of Man action.

“This is one of the best bike racing games available right now. Maybe even the best.”

TT Isle of Man – Ride on the Edge 2 stands out because of the hair-raising scenarios it places you in. No other racing game instils a sense of horror as you hurtle through a small village or a narrow country lane at insane speeds, knowing that just a lapse in judgement will result in you being flung from your bike. And the swishing and whooshing sounds that occur as you pass objects at breakneck pace are just wonderful. Play in first person and you’re bound to be both exhilarated and mortified.

Its grave difficulty level means that TT Isle of Man – Ride on the Edge 2 isn’t for everybody. Also, while it packs in a hell of a lot more content than its predecessor, it’s still not the most generous racing package available. There’s no denying, however, that this is one of the best bike racing games available right now. Maybe even the best. It’s more than just TT Isle of Man – Ride on the Edge with additional content stuffed in: it’s an accomplished sequel. So, if you’re gutted that you can’t watch the real thing this year, pick this up. It’s sure to soften the blow.

TT Isle of Man – Ride on the Edge 2 is available on PS4, Xbox One and PC. We reviewed the game on Xbox One X with code provided by the publisher.

Julien Toniutti Shares His Thoughts on TT – Isle on Man 2 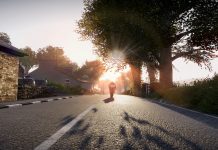