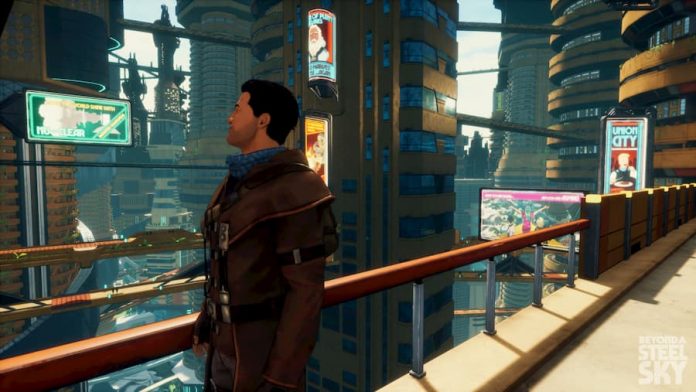 What kind of thundering imbecile barely escapes from a dystopian society and then decides to pay a return visit, fifteen or so years later?

The imbecile in question is Robert Foster, protagonist of Beyond a Steel Sky, the upcoming follow-up to 90s point-and-click adventure Beneath a Steel Sky. To be fair, there is a driving factor behind this lunacy; living in the Australian wilds, a family he befriended have had their child stolen, in much the same manner that Robert was abducted as a boy. And Robert wends his weary way back to Union City, the gleaming but morally murky metropolis he once left.

What could possibly go wrong?

You’ll have to wait until Beyond a Steel Sky‘s release to discover the mystery behind these kidnappings, but the preview version I got my hands gave me hope that the final product would deliver. The most striking thing about Beyond a Steel Sky is that, unlike its predecessor, it takes place in glorious, cel-shaded 3D. You can gaze down at Union City’s layered streets and raise your head to look at the towering skyscrapers. Having cracked the initial set of puzzles, I spent a good ten minutes roaming up and down a skybridge, gawping in awe at the city’s architecture. 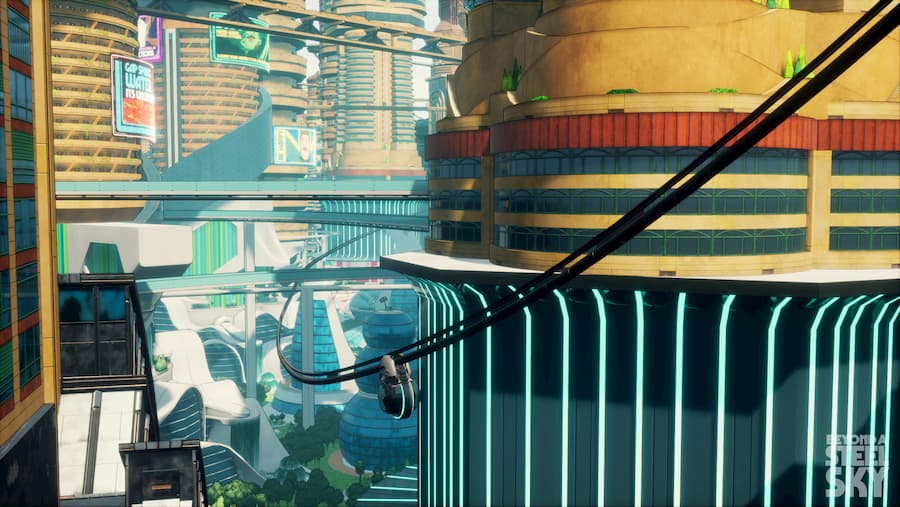 I was also impressed by how Beyond a Steel Sky distinguishes itself from more traditional dystopias (and I’m not just talking about the Australian accents). Yes, there’s an artificial intelligence running the city, but it’s not immediately painted as some evil overlord. There’s a human council involved as well, along with several ministries that drive the post-apocalpyptic city’s prosperity. But there’s nothing (child kidnapping aside) that screams 1984; rather there are subtle hints that things are a little… off. Having a citizen ID embedded in your hand is mildly worrying, but what nagged at me more were the hints that being sad makes you a second class citizen.

Yes, there’s hacking, but I was heartened that Beyond a Steel Sky forces you to think about what you want to accomplish; switch the functions around in a vending machine and you’ve got a device that will dispense cans without payment. It may not be William Gibson’s Neuromancer but it’s a step up from your usual hacking minigame. Beyond a Steel Sky’s more traditional puzzles proved entertaining enough, in the chunk I played at least, without ever being obtuse. They typically centre around interacting with some of the preview’s thoroughly three-dimensional characters. You encounter a couple of children living in the car park outside Union City but they’re neither mawkishly adorable or irritatingly antagonistic. 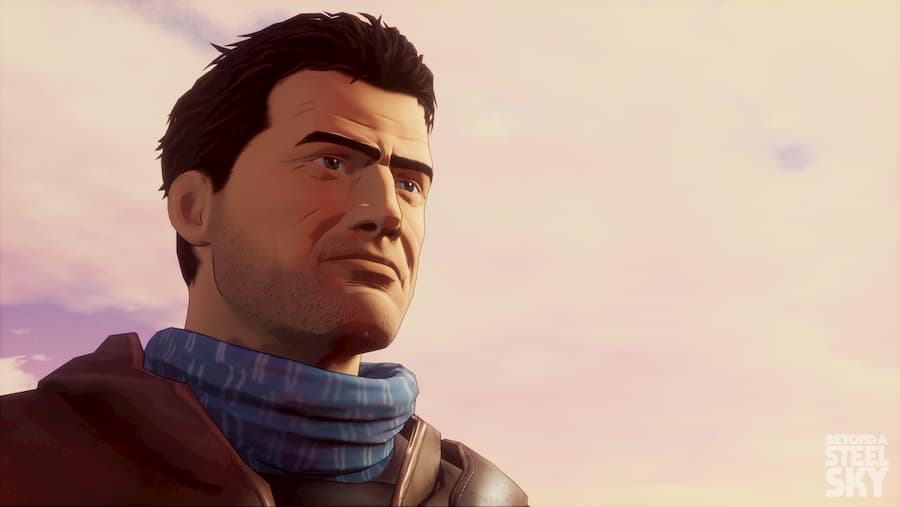 There’s a degree of snobbery when you head into the city, but I didn’t encounter a hint of moustache-twirling villainy. I’m rather hoping that the mystery at the heart of Union City isn’t as clear cut as you might think, that Foster will find himself having to make some tough calls, instead of just discovering an AI has gone rogue.

Beyond a Steel Sky’s preview build certainly left me wanting more, though with no set release date, it’s not clear when you’ll be able to revisit Union City yourself. When it does arrive, though, it’ll be coming to Steam and Apple Arcade – and I for one can’t wait to delve deeper into Union City.