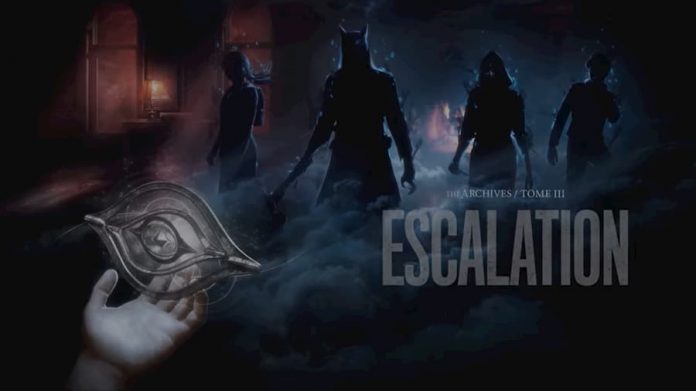 To bring more variety to their 4-versus-1 asymmetrical horror game Dead by Daylight, the folks over at Behaviour Interactive launched The Archives. The Archives are full of unique missions for players to try and complete in games, and they offer in-game bonuses. Tome III has just released – and it may well be the best one yet.

Tome III, “Escalation”, will allow players to not only receive in-game bonuses, but will also feature memories (game lore) from Dwight Fairfield’s ‘A Story by Any Other Name’, The Huntress’ ‘A Lovely War’, Kate Denson’s ‘Back to Zero’ and The Legion’s ‘Soldiers of Mayhem’.

The Tome comes with free rewards which will unlock as you play as well as a 30% sale on main characters Kate and Legion between now and May 6th. If you want more rewards you can buy the Rift Pass for $9.99 which will give those players access to even more in-game content.

A mid-chapter update also just released in-game yesterday, which includes some much-needed map changes to some of Dead by Daylight‘s most popular maps.

If you’re looking for a reason to pick Dead by Daylight back up than Tome III Escalation might be it. Especially if you’re interested in more lore for those four characters.