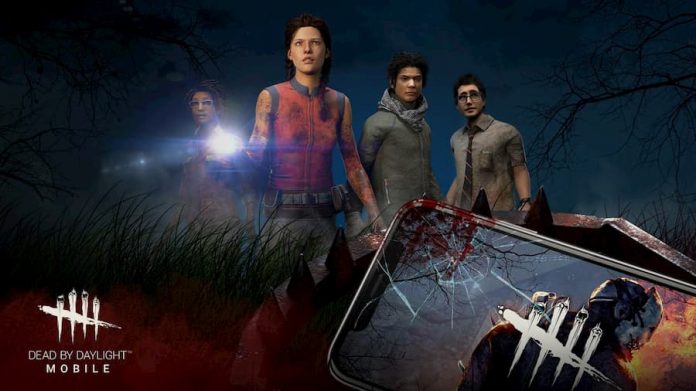 Behaviour Interactive has been boasting about Dead by Daylight Mobile for months, but has it managed to deliver on what was promised?

Dead by Daylight Mobile brings the popular 4-versus-1 asymmetrical horror game to iOS and Android devices in a free-to-play format. With this mobile version, Behaviour has promised a similar experience to what players on PC and console have grown to love, but completely re-imagined with a overhauled UI and various other tweaks to make it perfect for the mobile platform.

The beloved (and hated) characters from the game have squeezed their way into our phones – and it doesn’t look half bad. Unlike the ugly Nintendo Switch version of the game, Dead by Daylight Mobile looks and feels like what you’d expect; Dead by Daylight but smaller and more compact. Behaviour has done what feels like a monumental task and made it look easy.

The menu is smooth and easy to use – a must-have feature for mobile games. From the very first menu, you can easily switch between survivor and killer depending on who you want to play. You can see your daily quests, news or updates from the dev team, add friends, or adjust your options. You can also change your character, choose an outfit for them, change their loadout or buy items at the blood market.

The blood market works a little differently from the bloodweb that players will be used to from the console version of the game. You’ll still be spending the in-game currency, iridescent shards, to buy items, add-ons and offerings, but available purchases will unlock as you go; you need to buy items from the top row in order to unlock the next row, and so on. Once you reach the bottom and have purchased all of the items you’re able, you’ll be given a brand new blood market and be placed back at the top. You’re also able to refresh the blood market for 10,000 blood points if you don’t like many of the offerings – a unique difference from the console version. 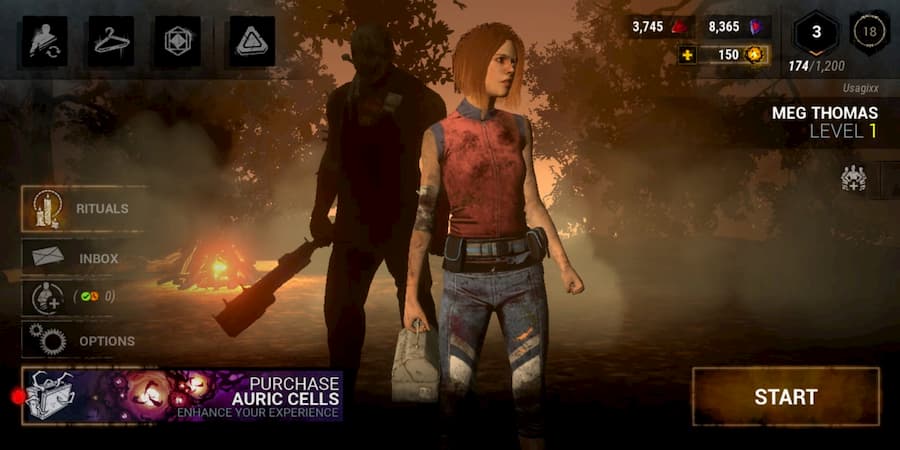 Unlike other versions of the game, Dead by Daylight Mobile is free-to-play. That means there’s no price of entry for jumping into matches – but there are some limitations. The big difference is that you won’t be able to play many of the characters right off the bat. To start with, you’ll be able to play as killer The Trapper, or survivor Dwight, but as you play you’ll unlock two other characters for each role for free. From there, you’ll have to buy characters – either with iridescent shards, which you’ll earn through playing, or Auric Cells, the game’s premium currency that can be bought with actual money. There are plenty of other in-game purchases too, such as character outfits.

Even if you fork out the cash to buy all of the characters, the roster still isn’t fully complete compared to the PC and console versions. Characters from the game’s more recent DLC , such as Stranger Things and Cursed Legacy are notably missing, but it’s possible these could be added at a later date.

But onto the game itself: how does it play? Overall, pretty well. I’ve had access to the game for a couple of weeks now and I’ve never waited to get into a lobby for more than a few minutes. The game’s still in beta, and the longest I’ve had to wait is 5-6 minutes. Those wait times are likely going to be much shorter once the game fully releases next week. As you’d expect, killer wait times are always much longer than survivor, but still in the 3-5 minute range. 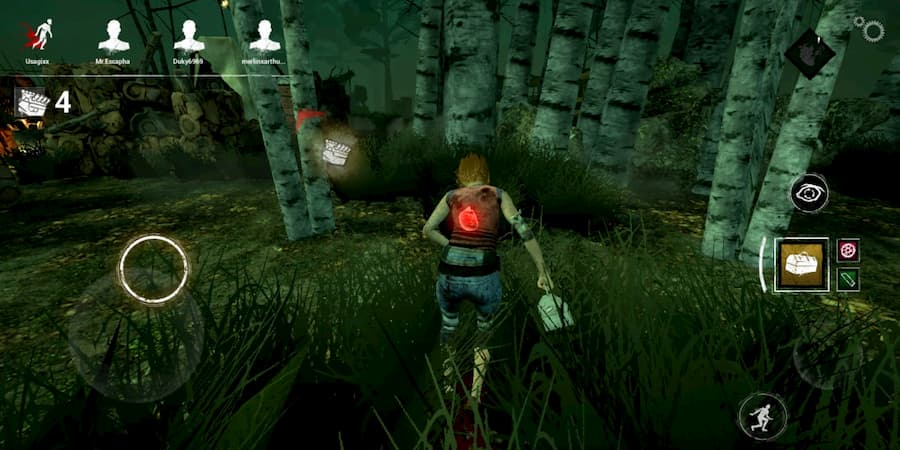 Once you get into a game, your goals are the same: survivors need to activate five generators, and the killer needs to stop them from doing so. The more quests you complete, the more points you’ll earn. Those points can be used to buy items for your characters to use in game.

Despite the overall goal of gameplay being the same, there are some notable changes between Dead by Daylight Mobile and its PC/console counterpart. for example, the killer no longer has a “terror radius”. Survivors will now have a heart that shows up in the middle of their chest when the killer is near. It needs a little work; it’s currently rather difficult to discern how close a killer is by looking at a heart, but with some tweaks it could be an invaluable addition.

Skill checks are also pretty different in Dead by Daylight Mobile. In the PC and console version, a needle would move in a circle, with players having to hit a button at the correct point when healing or repairing a generator. Here, the skill check now moves left to right across the screen, with players needing to tap the screen at the right moment. It’s a small change, but one that makes more sense for a mobile platform.

It’s Dead by Daylight Mobile‘s control scheme that proves to be the biggest bugbear so far – but that’s not altogether surprising for the mobile platform. Controls for both survivors and killer can be pretty clunky. When playing as a survivor, you’ll have one finger on the left side of the screen to control movement. Pushing far forward will cause your character to sprint – but there isn’t much wiggle room between a slow walk and sprinting. As such, you’ll likely find yourself sprinting quite a lot when you don’t mean to. When playing as a killer, pressing far forward on this portion of the screen will cause them to follow any survivor that they’re chasing – white streak lines will show up on the screen and make you feel like you’re Naruto running. It’s a good idea in principle, but the predictive technology’s lack of accuracy more often than not results in frustration when your character doesn’t move as intended. 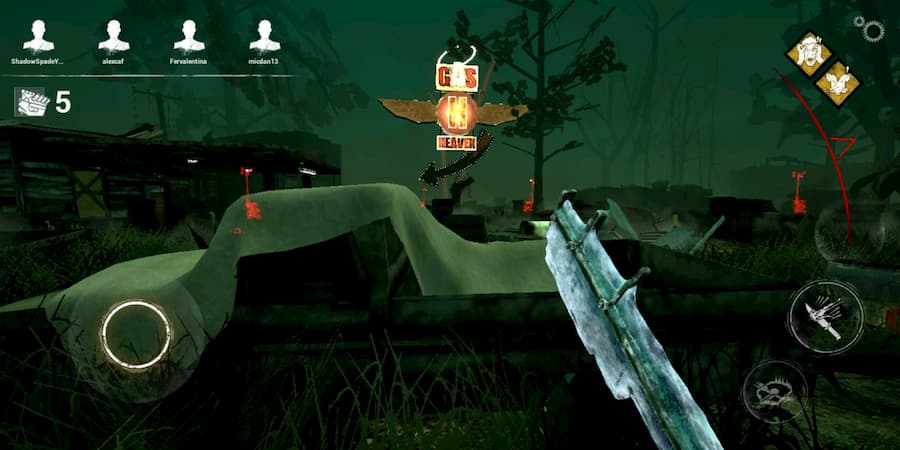 However: my issues are largely compounded by the fact I’ve played hundreds of hours with the game on console, so I’m used to using a controller. If you’re picking up Dead by Daylight for the first time on mobile, its control scheme may come as second nature to you. Dead by Daylight Mobile doesn’t fully support Bluetooth controller input, either. It makes sense; I can see how players using a controller would have a distinct advantage over those using the touchscreen; but without the option to do so, us players with fat hot dog fingers may never get used to the controls.

Control problems aside, Dead by Daylight Mobile manages to be pretty much everything you could expect from a mobile version of a popular game. Notably, it plays much better than the Nintendo Switch version in terms of performance and graphics – so despite its cumbersome controls, iOS and Android proves to be the best way to play Dead by Daylight on the go. In-game purchases are, of course, prevalent but it’s fully functioning without ever needing to spend a penny. There are some kinks still to be worked out, but when the entity crawls its way onto the phones of the public, players won’t be disappointed by all it has to offer.

Dead by Daylight Mobile releases next Thursday, 16th April. You can pre-register on Android and iOS now to receive free shards, items and The Scarecrow character. 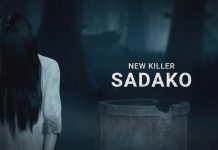