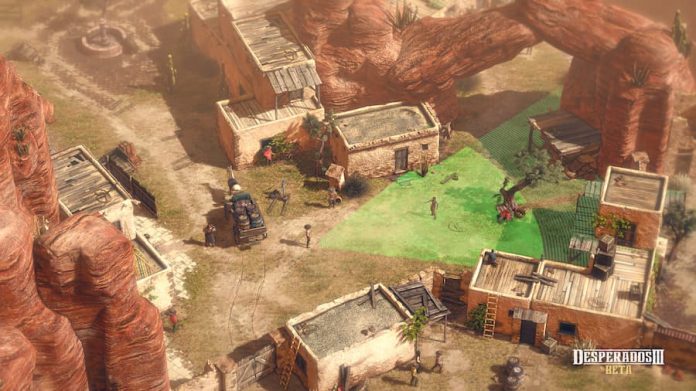 The release date for Desperados III has been announced: on 16th June, you’ll be able to take control of John Cooper and his ragtag bunch of companions and guide them through a story-driven adventure full of stealth and tactics.

We’ve spent some time with the PC version of Desperados III recently, getting a taste of what it has in store for us upon its release. And we’re pleased to report that we very much liked what we played. It probably shouldn’t come as much of a surprise though, given that it adopts the brilliant formula of Mimimi Games’ other tactical stealth opus, Shadow Tactics: Blades of the Shogun.

It may be set in the Wild West, but there’s little sense in going in all-guns shooting in Desperados III. Stealth very much rules the roost here, though you do get plenty of opportunities to shoot and stab bad guys that get in your way. With an easily accessible quick-save function, Desperados III is a game that welcomes experimentation.

Finding yourself tasked with making your way from one spot to another with multiple guards in the way, for example, you might try to sneak past them all, throwing a coin or two to distract their attention. Alternatively, you might decide to go loud, momentarily freezing time to assign a target to each of John Cooper’s two guns, then executing your action to swiftly and effectively eradicate the threat. You can’t always be sure how each approach will play out though, and moments of panic often ensue as a plan goes wrong. Whether you try to rescue the situation or simply load up your quicksave is up to you, but on your first time through you’re probably going to make a lot of mistakes.

While you start out with only John under your control, over time, many more join your gang, each and every one of them with their own strengths and weaknesses. As such, it’s imperative that you choose the right person for the right task. With his dual pistols, John is great for taking out multiple assailants at once, for example, while McCoy is useful for luring opponents and disposing of them with his traps. And then there’s Kate, whose penchant for dressing up allows her to fool most men, and then take them out without a fuss with her hidden gun. 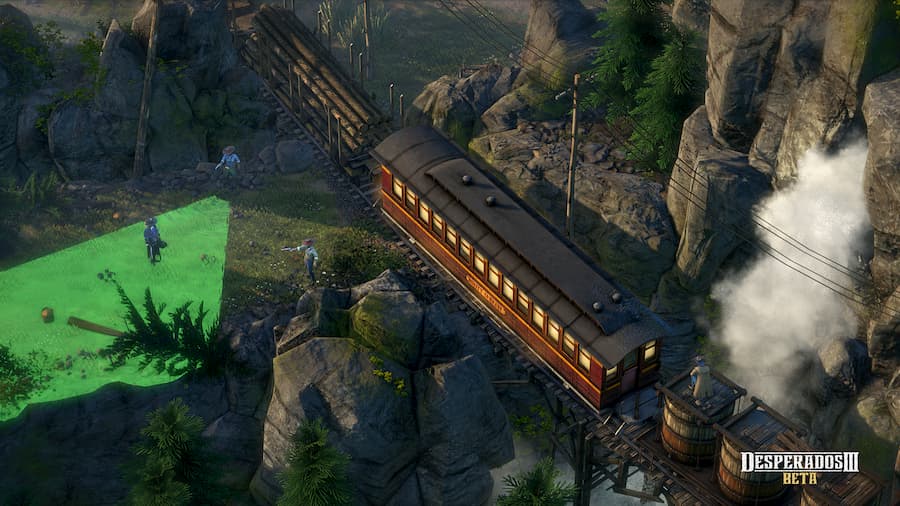 Desperados III‘s missions have a variety of objectives, and often give you plenty of leeway as to how they’re accomplished. You’ll often find bonus objectives, too, like rescuing hostages. It makes for a game with plenty of replayability, especially when you also factor in multiple difficulty settings and post-mission reviews. For your first playthough you’re probably best playing on normal, scoping out each area and learning about the characters available to you. Then you can set about mastering the game, conquering its hardest challenges.

While we’ve been sneaking our way through missions on PC, Desperados III will also be available on PS4 and Xbox One at launch. Judging by our time with Shadow Tactics: Blades of the Shogun, it’ll play wonderfully on those formats, too. We thinks it’s safe to say that anyone looking for some Wild West action that’s not just all about shooting bad guys left, right and centre should keep it firmly on their radar. Desperados III looks nice, has solid voice acting, and its tactical stealth gameplay leaves little to be desired. Series fans aren’t likely to be disappointed.

Check out the John Cooper trailer for Desperados III below, and then perhaps pre-order Desperados III to secure your copy. A Collector’s Edition of the game is also available which includes the official soundtrack, an artbook, eight postcards, and a spinning music box with interchangeable figurines.