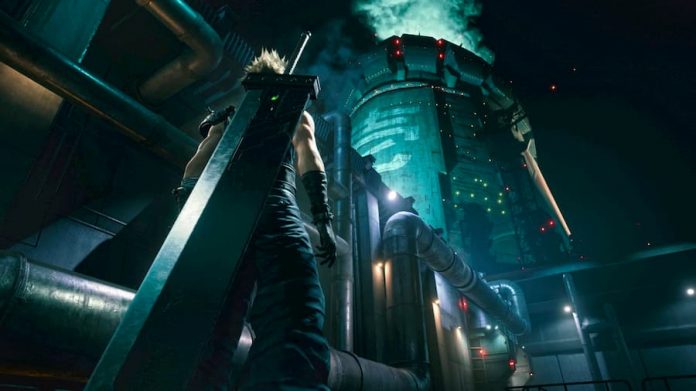 Square Enix took on a huge task remaking one of the most beloved JRPGs ever made.

Back in the day, Final Fantasy VII was revelatory. It redefined the JRPG genre, and indeed what a game could be. Without Final Fantasy VII, many people like myself probably wouldn’t be writing about games; it stirred something within us. And so the announcement that it was being remade filled many with just about as much excitement as it did dread. Change too much and the fond memories would be ruined. But at the same time, how could it not be changed? Now over twenty years old, many aspects of the original Final Fantasy VII are clearly outdated.

And so here we are with Final Fantasy VII Remake. Part one of God knows how many games that will cover the story of Final Fantasy VII in a way that makes it just as epic today as it was back then. It essentially turns the first seven or so hours of the original into its own full-fat 30 plus hour game. And what’s surprising is that it manages to do that while not feeling like it’s spreading the source material too thin. By adding in additional scenes, Final Fantasy VII Remake actually betters the original game’s storytelling, making you feel for its cast of characters like never before.

“Final Fantasy VII Remake actually betters the original game’s storytelling, making you feel for its cast of characters like never before”

The main character of the game is, of course, Cloud Strife, with a demeanour even more prickly than his blonde hair. Ex-SOLDIER, he’s now picking up work as a merc, and has been hired by a cell of the terrorist group Avalanche to assist with bombing a Mako Reactor. The reactors are sucking the energy from the planet, you see, and group leader Barret doesn’t like that. He wants to bring the company responsible for the Mako Reactors, Shinra Energy Corporation, down, and will pretty much stop at nothing to achieve it.

In the early hours of Final Fantasy VII Remake, you’ll be spending your time with the members of Avalanche – Jessie, Biggs, Wedge, Barret and Tifa – while also building up your cred as a merc. While the original Final Fantasy VII moved at a breakneck pace, here you’re given a chance to breathe, learn about your new acquaintances, and also Cloud. While he has a harsh exterior and doesn’t seem to care, there’s glimpses of a kind soul underneath. Characterisation here is on point, drawing you into the story and the plight of Avalanche in a way the original never could. 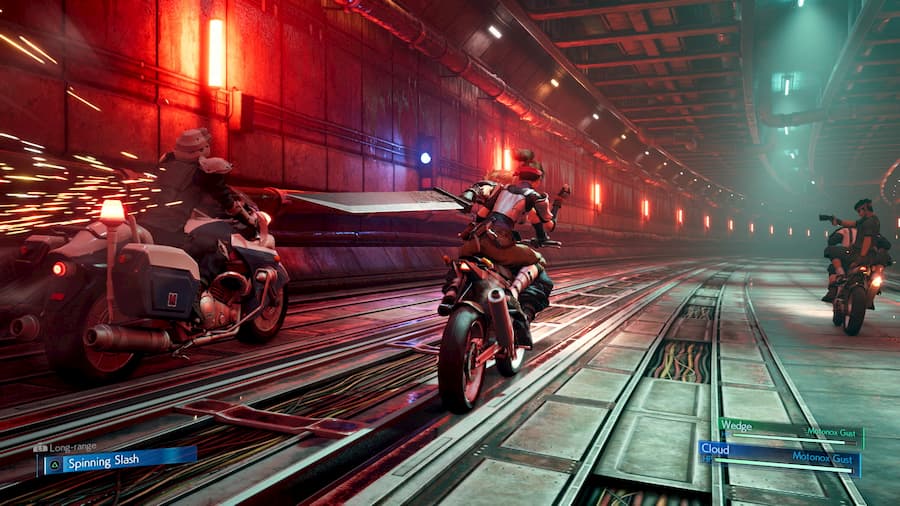 As the story progresses, anyone that has played the original will be amazed at how faithful key scenes are in this remake. They’ll grin from ear to ear during the Don Corneo section of the game, and will love squaring off against recognisable bosses. There is a lot that’s new in Final Fantasy VII Remake, however, and thankfully most of it fits right in. Some story beats have been padded out, but done so in a way that’s meaningful and rewarding. There are now side-quests to complete at various points of the game, too, and combat challenges dispensed by a curious chap who unfortunately sticks out like a sore thumb. Though some players may find these to be a bit too filler-like.

For fans of the original Final Fantasy VII, some changes to the story perhaps might feel unsavoury. A new otherworldly force left me scratching my head for much of the game, wondering if it would fit in and pay off. It kind of did in the end – and by that point I’d decided to give it the benefit of the doubt anyway – but others might not be so accepting. In a similar vein, the latter half of Final Fantasy VII Remake‘s final chapter is bound to be a bone of contention. It’s undoubtedly epic, but feels a bit too much like something out of Kingdom Hearts rather than Final Fantasy. That being said, those new to the game will probably lap it up as it won’t be playing with their memories.

Along with the story, what really makes Final Fantasy VII Remake a joy to play is its combat. Out are the random battles and turn-based combat of the original, replaced with fast-paced, high-octane action that’s as rewarding to control as it is to watch. Each of Final Fantasy VII Remake’s four playable characters feels unique to control, offering their own specialisations and abilities. Cloud, for example, is great for managing crowds thanks to his wide swings, while Barret is best when operating at range thanks to his range of projectile attacks. You can switch between any of your active party members while in battle, and it’s recommended that you do so to get the best out of their capabilities.

Combat is made particularity deep thanks to the wide range of abilities each character can learn from the weapons at their disposal. They can be equipped with Materia, too; powerful orbs that offer a range of elemental spells and more. As you progress through the game, weapons can be upgraded, increasing their stats, number of Materia slots and more. And because of the new weapon upgrade feature, instead of new weapons making older ones obsolete, they now facilitate builds that you can easily switch between. Basically, each weapon balances physical and magical attack proficiency to some degree. 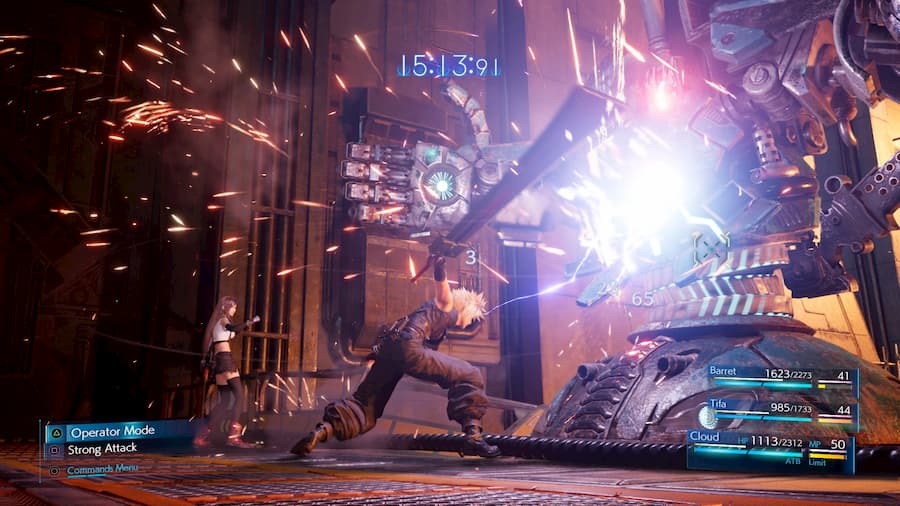 Those who fondly remember the old turn-based combat can get a little taste of it in Final Fantasy VII Remake thanks to a Classic combat mode. Setting the combat difficulty to easy, Classic mode lets you sit back and simply issue commands should you wish. All members of your party will operate on their own terms, but it’s down to you to to use any ATB charges to initiate abilities, cast spells, or even initiate a summon. It’s an enjoyable compromise for those who just can’t keep up with the action, though you can take direct control of any active party member at any time if you want to do something decisive.

On easy difficulty, Final Fantasy VII Remake is a walk in the park for the most part. Some of the later bosses might challenge you, but you’ll bulldoze your way through most encounters with minimal effort. Switch up to normal though, and those who like a challenge will find themselves tested more often. On normal difficulty it’s absolutely vital to make use of the game’s stagger system, which puts enemies in a vulnerable state on which you should capitalise. But how to stagger an enemy isn’t always clear; it’s up to you to figure out what puts the pressure on them and then turn up the heat. It’s a system that rewards experimentation and strategy. As such, it’s Final Fantasy VII Remake‘s bosses that are the highlight of the game. 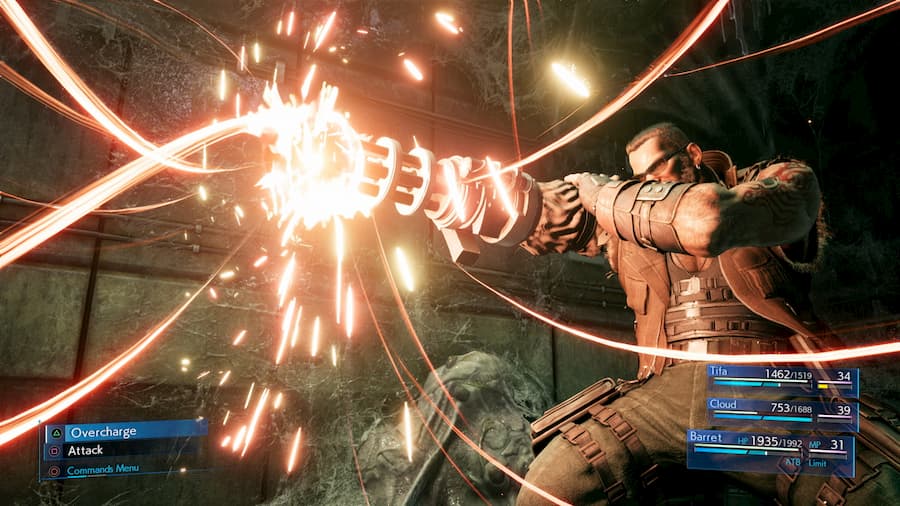 There are some gameplay aspects of Final Fantasy VII Remake that aren’t as enjoyable as its combat, though. There are a couple of bike scenes, for example, that are nearly as janky as the one found in the original game, and some actions, like negotiating vents or overhead bars, feel a little arduous. On the whole though, irritations are few and far between. There are many things in Final Fantasy VII Remake that aren’t stellar, but it’s greater than the sum of its parts. And it helps that the game’s production values are through the roof.

Final Fantasy VII Remake has some of the most beautifully-realised character and enemy models I’ve ever seen. Their expressive faces and subtle motions convey emotion, drawing you into the game’s world like no Final Fantasy before it. The majority of the environments are just as impressive, too. Concessions have been made, however, in some of the more sprawling areas of the game. While NPCs who are connected to story or additional content have mostly been given the same lavish treatment as the main cast, others are your typical low-quality open world fodder. And you’ll wince at the occasional terribly low-res texture.

On the whole though, Final Fantasy VII Remake is a fantastic-looking game. And it performs admirably. It may run at 30fps but it feels smoother, and never once have I felt performance impacted by any on-screen action. That’s quite an achievement considering how hectic the action gets. Fights are generally spectacular, with an abundance of particle effects dazzling you as Cloud and co. punch, slash and shoot their way to victory. And don’t even get me started on summons and other highly-damaging skills.

The music of Final Fantasy VII is held dear to many, and this remake handles it with care. Many of the original game’s themes have been gracefully updated and remixed, making listening to them a nostalgic but also energising experience. There are variations of the themes, too, which you can collect as you move through the slums of Midgar. They’re essentially just collectibles, but you can listen to them at the various jukeboxes you find on your journey. 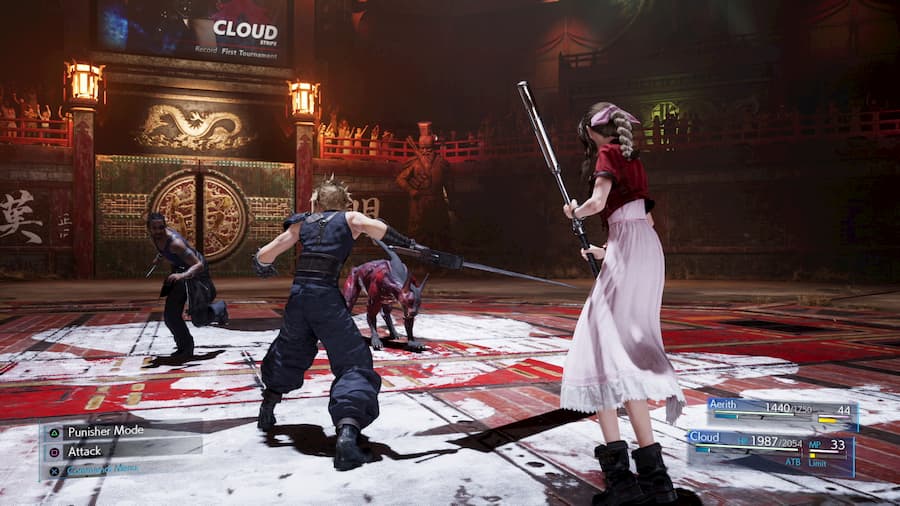 There’s not really much more you could ask for in a remake of the first arc of Final Fantasy VII‘s story. Sure, some things have been changed, but that was always going to happen; Final Fantasy VII Remake has to be entertaining and surprising to both those familiar with the original game and those who have never played it. It’s quite amazing how faithful this remake is to the original, truth be told, and how much the majority of the new scenes added enrich the story. By the end of Final Fantasy VII Remake you feel like you know more about its ragtag bunch of characters than you ever did the first time around. And while there is obviously more to come, you don’t feel short changed. You just feel like one epic story has ended and another one lies in wait.

Final Fantasy VII Remake is the best JRPG from Square since Final Fantasy VII. It takes a classic, carefully builds on it, and although certain changes made to the story may not be as well-received by all players, overall there’s no denying that it’s a massive success. As the credits rolled I felt fulfilled, and excited for what comes next. That’s probably the worst thing about Final Final VII Remake, actually: the wait for what comes next. It’s going to be excruciating, but judging by what’s already been delivered, it’s going to be worth it.

Final Fantasy VII Remake is available on PS4. We reviewed the game on a PS4 Pro with code provided by the publisher.

Want to support GameSpew? Buy Final Fantasy VII Remake using our Amazon affiliate link. It won’t cost you anything extra, but we’ll get a small slice of the purchase.