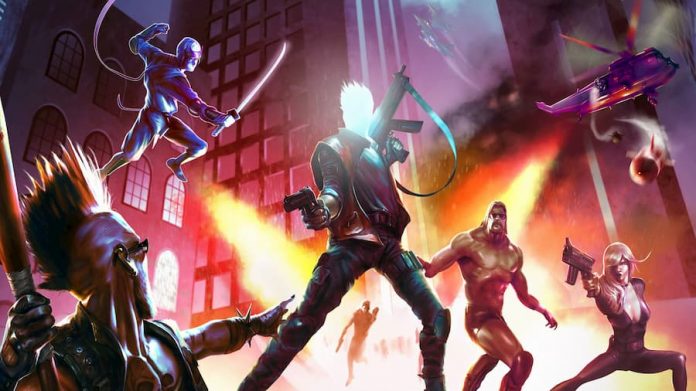 Videogames. You’re always the good guy, never the alien causing mass panic and destruction on Earth, am I right?

Well, HyperParasite, a Rogue-like twin-stick brawler from Troglobytes Games intends to rectify that. Instead of being the hero trying to save the day, here you play an alien parasite out to wreak havoc. Your natural, gooey form allows you to dodge attacks and fire projectiles at enemies. But your real power comes from your ability to take over a host’s body, gaining their skills and abilities.

Essentially, then, you’ve got a near-unlimited number of characters you can play as. Each class of civilians has their own strengths and weaknesses, so you’ll quickly have your favourite host bodies. There’s the police officer, for example, whose pistol fires powerful bullets but needs reloading after every six shots. Or there’s the supermarket trolley-wielding hobo who does serious damage to his opponents by ramming into them – but he’s not got much in the way of defence. Later on, you’ll encounter characters with boomerangs, laser guns and more. Each of HyperParasite‘s five acts has a dozen different characters for you to get to grips with, so there’s a lot of choice.

Or at least there would be, if you manage to get to see HyperParasite‘s later acts. It’s not a walk in the park, and its Rogue-like nature means you’ll likely find yourself replaying act one again and again.

The joy that comes from HyperParasite‘s simple but agreeable gameplay loop means this isn’t too much of a hardship, however. At least not to begin with. In order to be able to take over a host body, you first need to unlock them. That means killing an ‘elite’ version, and taking their brain. It sounds grim, but seeing a disembodied brain follow you around the game for a while is enough to make you grin wildly. Taking the brain to the shop (there’s one on each level) will allow you to begin the process of unlocking that character, which requires you to deposit a number of coins. The unlock price depends on the strength and skill of the character. 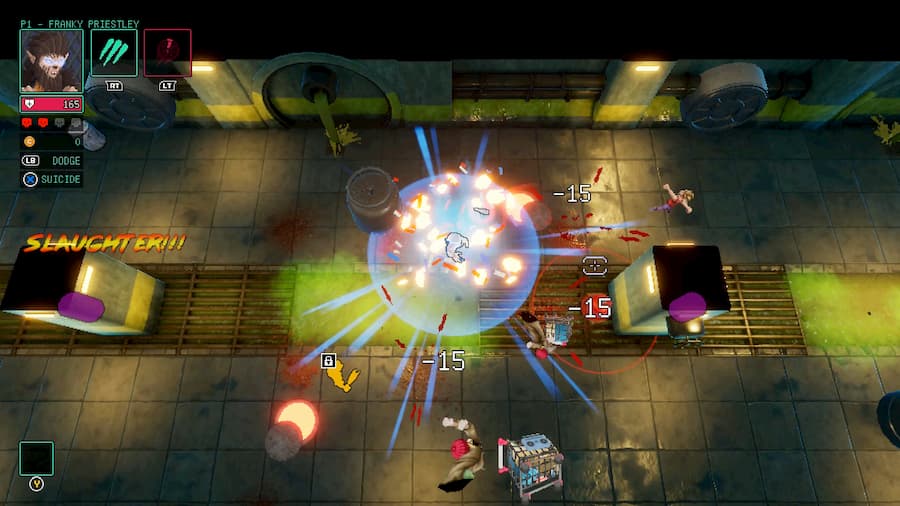 Thankfully, despite being a Rogue-like, your progress towards unlocking characters carries over between games. So even if you die, your unlocked characters will remain, as will any amounts of money you’ve siphoned into them. As such, it’s always worth pouring your funds into them rather than buying character upgrades, as they’ll perish should you get met with a Game Over screen.

As you make your way through each of HyperParasite‘s randomly-generated acts, you’ll fight a range of enemies, including a mini-boss and a boss for each. You’ll also have several opportunities to upgrade either your offensive or defensive stats, or gain a new life for your parasite. You see, while your host bodies have their own HP stats, your parasite itself starts out with only one life. That means, in your natural form, one hit will see you dead. When a host’s HP dwindles to zero, you’ll revert back to your alien form. You’ll likely want to jump into another host body as soon as possible. 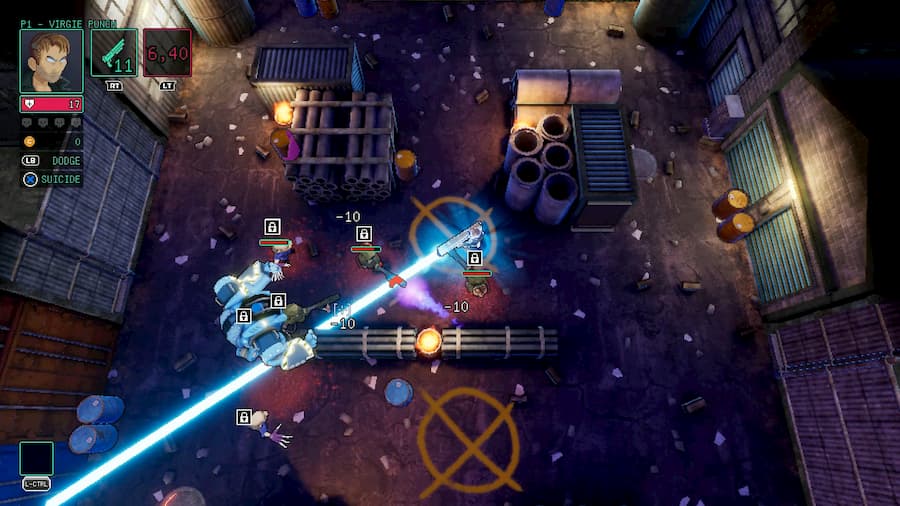 Once you’ve unlocked a good proportion of the characters available in a level, HyperParasite becomes an easier task. Should you find yourself in your alien form, there’s always another body ready to jump into. When you start out, there’s already three character types unlocked for you in act one, meaning you’re usually in range of at least one type of character you can take over. When there isn’t though, HyperParasite becomes a slog. Sure, your alien form can dodge, but its only attack type is pretty weak. And unless you’ve upgraded significantly, you’re likely to only be able to take one or two lots of damage before it’s the end of the line. If you run out of host characters to control, it’s very hard to turn the tide back in your favour.

That becomes a huge problem once you’ve got past the game’s first act. While act one gave you the basic character types for free, further acts aren’t so generous. You’ll begin an act with whatever character you finished the last one with – but should they die, you’re stuck in your alien form until you can manage to unlock some more hosts. The random nature of HyperParasite means the host brains you first come across may well be the more expensive ones to unlock – meaning you’re left to slog it as an underpowered alien until you’ve raised some funds. And chances are, you won’t last long as the alien. Fail, and you’re not just sent back to the beginning of the act; you’re sent back to the beginning of the game. 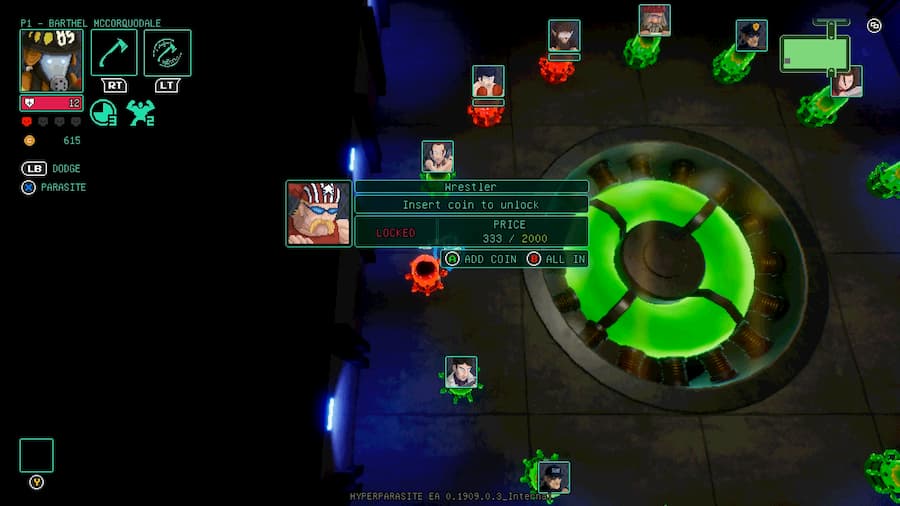 HyperParasite is meant to be a tough nut to crack. Its challenge is part of its appeal, and even though I’ve played through act one more times than I care to count in the last week or so, I still keep going back to it, determined to progress a little further than last time. The trouble is, at times it feels unfairly punishing. The vast majority of players are unlikely to ever see the game’s later acts – and that’s a real shame, because they’re all brilliantly designed with unique themes. Being able to save your progress for each new act – or at least giving one freebie character when you first reach a new act – would massively help HyperParasite from feeling like fighting a losing battle.

With that said, few Rogue-like games have grabbed my attention quite like HyperParasite has. Its unique premise is a lot of fun, and the sheer wealth of characters available means that the game can feel like a totally different experience from one moment to the next. Unlocking all characters means there’s always something to work towards; add to that the game’s tongue-in-cheek 80s atmosphere and bombastic soundtrack, and there’s plenty of reason to keep jumping back in. It’s just a shame that HyperParasite‘s unforgiving nature means most of its players won’t ever fully experience what the game has to offer.

HyperParasite is available on PC, Xbox One, PS4 and Switch. We reviewed the game on Xbox One X with a code provided by the publisher.