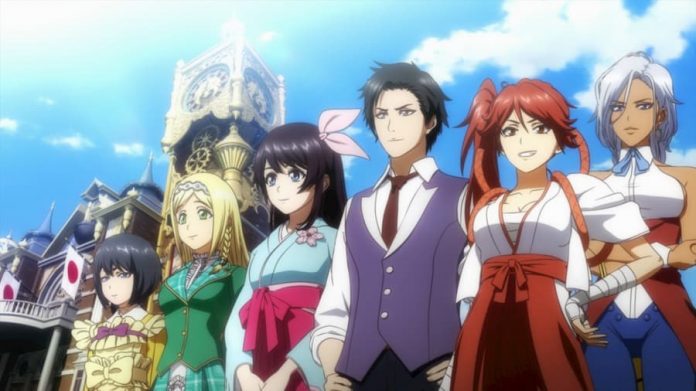 Taking place in a fictionalised version of the Taishō period, Sakura Wars places you in the shoes of Seijuro Kamiyama.

Formerly of the Imperial Japanese Navy, Seijuro Kamiyama now finds himself stationed at the Imperial Theater, a move that he first considers a demotion. Quickly discovering that the theater is also the base of operations for the Imperial Combat Revue’s Flower Division, however, he’s thrilled to become its captain. Though it soon becomes clear that the scope of his role is perhaps bigger then he anticipated; as well as protecting Tokyo from demonic threat, he’s also largely in charge of organising future shows to bring money in, and keeping the many new ladies in his life happy.

The previous five Sakura Wars titles have combined aspects of the visual novel, dating sim and tactical role-playing genres to good effect, and the latest doesn’t stray far from the formula. Taking control of Seijuro, you unravel Sakura Wars‘ story at your own pace. What’s more, you’re in control of how involved you get with the various members of the Imperial Combat Revue. Chances are you’ll develop at least one love interest, but how many other hearts you win over depends on how much time you want to spend chatting, and the dialogue choices you make. The tactical turn-based combat has been thrown out of the window though, replaced with real-time action that better balances out the slow pace of the game.

“Even Sakura Wars‘ prolonged, slow-paced sections are still entertaining thanks to the escapades that the characters finds themselves in”

In the first third of Sakura Wars, you’ll be getting to grips with the game’s core systems and settling into your new role. The title of ‘captain’ may sound rather important, but you’ll spend most of your time being the Revue’s lackey, completing menial tasks under the proviso that it’ll allow you to get to know people/the theater/the area better. And then you hit the Combat Revue World Games, a competition between combat revues from around the world, and a more pleasant balance between action and adventure is found. The truth is, however, that even Sakura Wars‘ prolonged, slow-paced sections are still entertaining thanks to the escapades that the characters finds themselves in.

Unless you’re hell-bent on making your way through the game as fast as possible for some reason, it’s heavily recommended that you go out of your way to talk to each of the girls who make up the rest of the Imperial Combat Revue in your free time. You’ll discover comical scenes and drama, making you appreciate each and every one of them. Depending on how you interact with them, their opinion of you might change as well. Make a good impression and not only might they start opening up to you more, they could possibly even develop feelings for you. And those feelings could end up being beneficial to your combat operations. 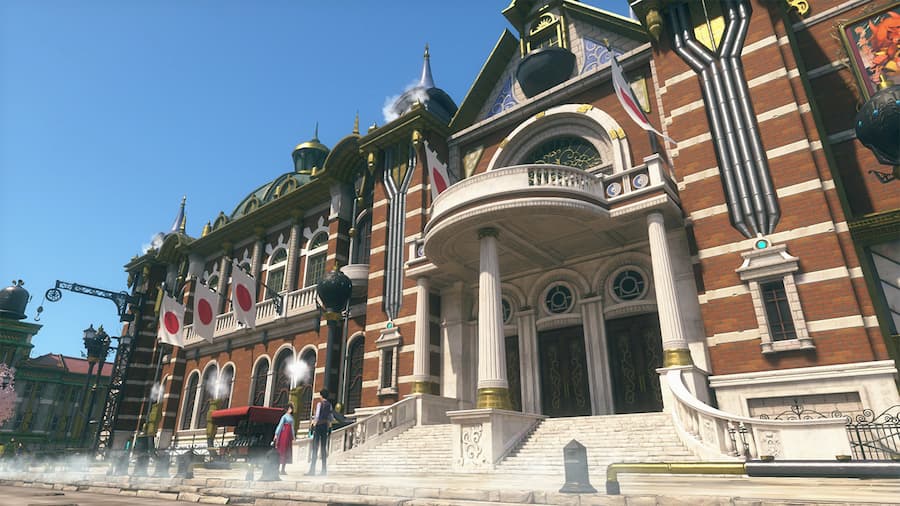 “It’s the story that Sakura Wars tells that takes centre stage, and it’s an interesting tale.”

When demons attack, the Imperial Combat Revue’s Flower Division leaps into action, manning chunky mechs that are well-equipped to take down the demon threat. Combat isn’t anything out of the ordinary; making your way through linear stages, you have standard and strong attacks which can be combined to form combos, a nifty dash that allows you to quickly get out of harm’s way, and a couple of powerful special attacks to make use of. And as you do battle, it’s important to monitor the morale of your squad; when morale is high you’ll find your team members doing more damage, but start to take hits and your hard work will be for nought.

Up to three members of the Imperial Combat Revue can engage in battle at any one time, and you can switch between them with the push of a button. Each having their own specific moveset and special attack, it’s recommended that you do so, too. Ranged characters like Claris and Anastasia are great for taking down flying enemies and those that fire projectiles, for example. Those who are melee focused such as Seijuro and Hatsuho are great for doing lots of damage up close, and also taking out whole groups of enemies with their special attacks. Success in combat, especially when facing off against bosses, relies on you switching to the right characters at the right time. 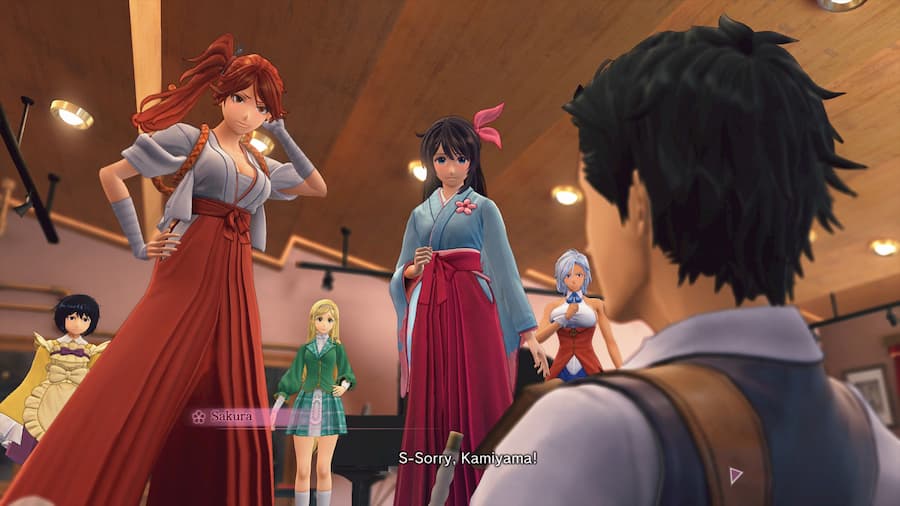 Released in Japan last December, Sakura Wars’ combat has been vastly improved via a patch in time for its western launch. The camera has been pulled back, giving you a better view of the battlefield, and a lock-on feature has been added. Having played through combat scenarios both before and after the patch, there really is night and day difference. It’s just a shame that enemy design is a bit dull. Bosses and enemy mechs are okay, but the hordes of boring robots that you fight aren’t inspiring, and other, more formidable foes, aren’t a great deal more interesting. The environments are a bit drab, too.

With combat only playing a major role in the later stages of the game, however, it’s easy to look past its less than stellar aspects. It’s the story that Sakura Wars tells that takes centre stage, and it’s an interesting tale. It’s funny, tragic, heart-warming, dramatic, and, more importantly, highly entertaining. It keeps you glued to your seat, reading screen after screen of text. And it’s wonderfully brought to life with clean, colourful visuals. It’s just a shame that its presentation isn’t always so consistent. 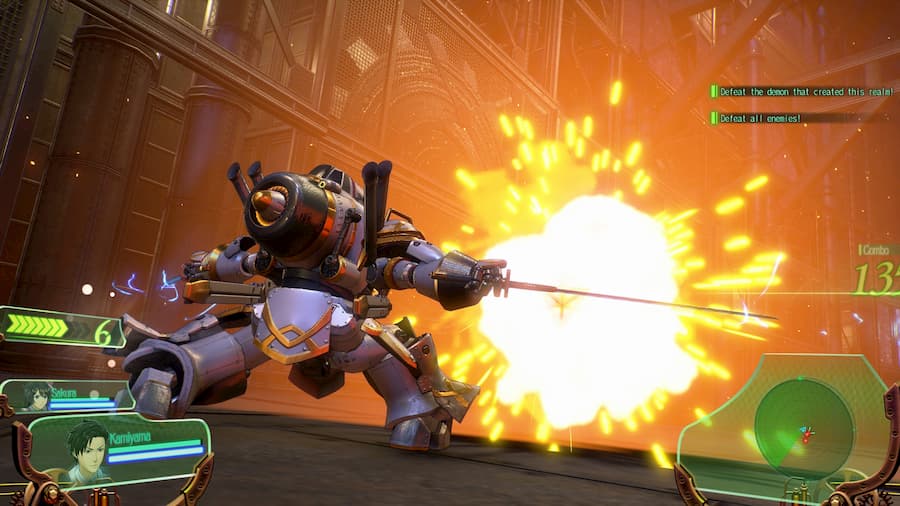 “Sakura Wars is far from being perfect. It does, however, have charm, and that goes far.”

While the huge majority of Sakura Wars‘ scenes are voiced, albeit in Japanese only, there are some scenes where voice acting is strangely absent. The characters’ mouths move and they gesticulate as if they’re telling a grand tale, but you hear no words. It really doesn’t matter in the grand scheme of things, because unless you know Japanese you’ll simply be reading text anyway, but it’s just a bit jarring. The first time it happens you’ll wonder if your game has bugged out. You’ll soon become accustomed to it, but it still might irk you.

Needless to say, Sakura Wars is far from being perfect. It does, however, have charm, and that goes far. With its amusing character interactions and dramatic scenes, it keeps you eager to discover what’s going to happen next. It’s a lengthy story, too, with optional combat scenarios, a card-based mini-game, and multiple endings to pad out the playing time. And though the combat isn’t anything special, it’s enjoyable enough to keep you slashing and blasting away when it becomes a much more prominent aspect of the game. A unique combination of genres, Sakura Wars is ultimately a compelling adventure that’s greater than the sum of its parts.

Sakura Wars is available on PS4. We reviewed the game on PS4 Pro with code provided by the game’s publisher. 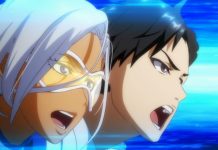 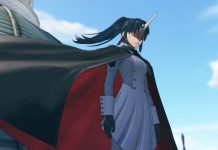 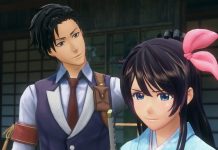