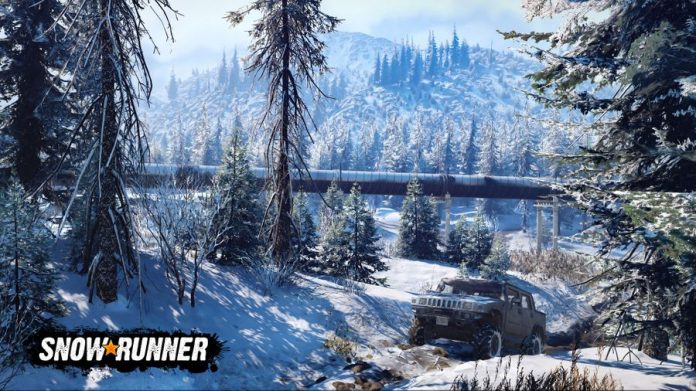 Thanks to SnowRunner, I’ve discovered an untapped reservoir of determination within myself. Unfortunately, this inner strength only manifests itself while I’m trying to drag an eight-wheeler through a snow-drift.

But it’s still remarkable how this truck’em-up turns a relatively mundane activity into a glorious, compelling timesink, so much so that logic goes out of the window when you’re playing it. You know that, with the push of a button, you can teleport your vehicle back to your garage and try again.

Yes, you’re moving forward in increments so minute that they can only be measured with an electron microscope and you’ve demolished six saplings trying to winch yourself out of this mess. But, goddammit, this delivery is your responsibility and it’s going to get there even if it takes all year.

“The trucks are pleasingly sluggish to drive, handling much as you’d expect them to”

Thankfully, SnowRunner doesn’t throw you in at the deep end, easing you in with a user-friendly tutorial. It’s a more accessible title than its predecessor, MudRunner, and despite the name, doesn’t just swap muck for snow. Hauling freight is the meat of the game but the missions are a little more varied; you may find yourself shifting abandoned trucks and so forth. Getting yourself unstuck can be tricky; getting someone else unstuck while avoiding the same trap is a real challenge, though you’ll be punching the air when you see the abandoned vehicle start to shift.

SnowRunner is also a much bigger game than Mudrunner and sports three huge maps (chunked into smaller interconnected areas, though the transitions are unintrusive). After the tutorial, you’re free to stay in Michigan, head to Alaska or even ship your truck off to Russia – though, having played MudRunner, the latter felt a little too familiar to revisit any time soon. 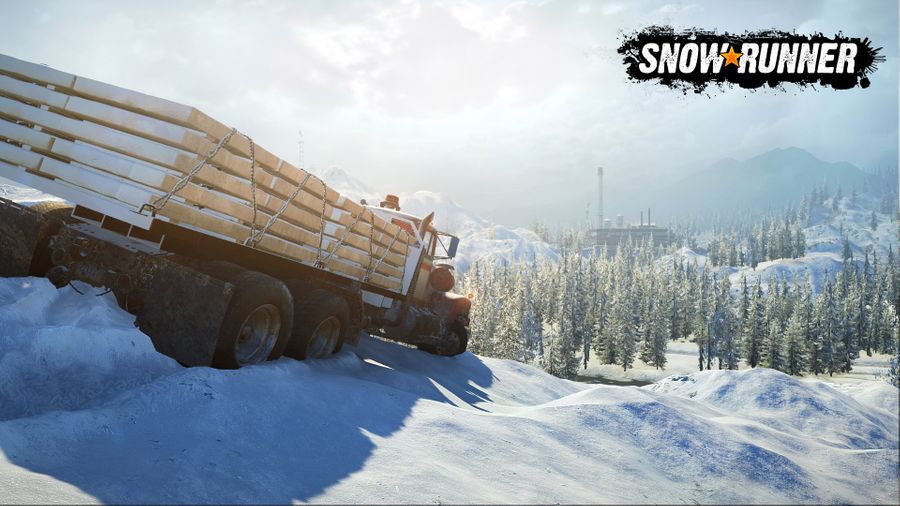 “SnowRunner is a learning experience; every mistake you make is a lesson”

If you’re determined to reenact your favourite episode of Ice Road Truckers and make SnowRunner live up to its name, Alaska is the place to go. SnowRunner‘s smartest feature is that while it doesn’t technically stop you from you heading off-road in the first truck you get your hands on, vehicles are doled out so as to encourage you to get to grips with the game slowly. Your first few deliveries involve sticking to regular (if not particularly well maintained) roads because your truck can’t handle more. Even then, you’ll likely to have to use your winch to get you out of a tight spot.

So when you do get your hands on a new truck, you get a warm fuzzy glow from knowing you’ve earned it. The trucks are pleasingly sluggish to drive, handling much as you’d expect them to. Even when you’re not struggling through a mire, you’ll have to concentrate to keep them on the road. It’s a mercy that, in an unintentionally topical twist, there are no other people or vehicles roaming the roads, because I lost count of the number of times I drifted across the central line. But with each theoretically catastrophic slip, I got a little better, noticing when I needed to nudge my vehicle back into place. 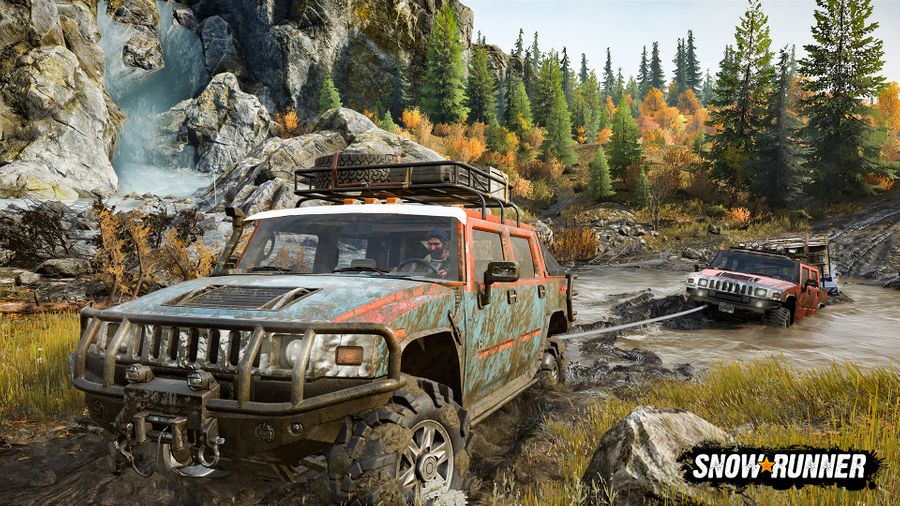 Because, like MudRunner, SnowRunner is a learning experience; every mistake you make is a lesson. You well may have come a cropper this time, to the point where even six hours of wiggling the gearstick and stamping on the accelerator won’t help – but next time you’ll consider your route a little more carefully. Route planning is, in fact, strangely fulfilling; I initially resented MudRunner’s lack of a route finder, but I grew to love taking into account the hazards I’d observed from previous runs, and this has carried on into this title. Even when you’re wheel-deep in mud or about to lose your trailer on a snowy incline, frustration rarely kicks in because you’re the one who chose that particular path.

SnowRunner won’t appeal to absolutely everyone, particularly if you’re short on patience, but you don’t need to be a dieselhead to get a kick out of it. True, you can customise your truck to the nth degree, repainting it, changing the engine, adding snow chains and so forth. I didn’t see any “Truck Nutz” but, with mods supported from day one, I’m disappointingly sure someone will add them to SnowRunner’s PC version. Alternatively, you can just take to the road, tackling whatever obstacles you stumble across, relishing the challenge. 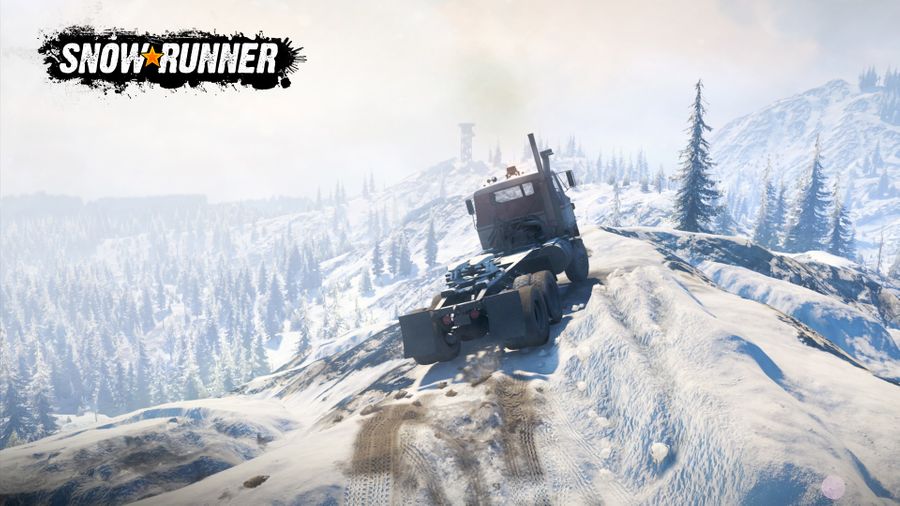 “Even when you’re struggling up an incline with a 20-tonne load, SnowRunner is a joy to play”

SnowRunner is never going to be an absolute cakewalk, but you can, to some degree, choose how much challenge you take on. Night driving is an example of this; with a day/night cycle, SnowRunner will happily let you advance time. However, you’re missing out on the eerie but satisfying sensation of struggling through the gloom, your headlights illuminating swathes of SnowRunner’s striking scenery. Likewise loading your cargo; you can hit a button to quickly auto-load whatever you’re transporting, or start messing about with a crane and load it yourself. SnowRunner does have a multiplayer co-op option but, for me, it’ll always be a solo experience.

It’s not a flawless experience; using lookout towers to discover new locations is a little old hat and the handling of SnowRunner’s smallest vehicles feels a bit off. However, even when you’re struggling up an incline with a 20-tonne load, SnowRunner is a joy to play. Driving around, making deliveries at your own speed, is just as much fun as leaning into the gripping off-roading elements and, no matter what the game throws at you, you’ll always be throughly invested in your success. Truckin’ ain’t easy but if you jump into SnowRunner’s driver’s seat, you’re in for a great ride.

Snowrunner is available on PC, PS4 and Xbox One. We reviewed the game on Xbox One with a code provided by the publisher.

Want to support GameSpew? Buy Snowrunner using our Amazon affiliate link. It won’t cost you anything extra, but we’ll get a small slice of the purchase.