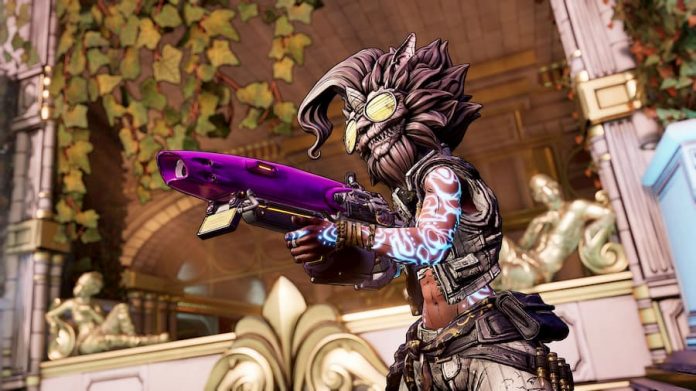 Taking place between 23rd April and 4th June, the next Borderlands 3 seasonal event has been announced.

Revenge of the Cartels features an all-new area, as well as new enemy types, limited-time challenges, and of course, mountains of loot for you to collect, including new Legendaries and Anointments.

The season revolves around Joey Ultraviolet, the kingpin of the Eridium Cartel. Maurice, your Saurian crewmate, has found himself on the wrong side of him, you see, and so it’s up to you to sort it out. So yeah, basically you’ve got to kill Joey Ultraviolet and his henchmen, and to do so you’ll have to travel to Villa Ultraviolet.

When Revenge of the Cartels goes live, you’ll be able to access Villa Ultraviolet by completing a quest provided by Maurice while on Sanctuary III. The real battle begins once you’ve made it in, though, with you having to battle your way through three distinct gangs before taking out Joey Ultraviolet. But hey, just think of all the sweet loot you’ll obtain in the process.

More loot can be obtained by completing challenges, too. Borderlands 3‘s Revenge of the Cartels seasonal event introduces 18 challenges, and there are five cosmetic items to collect for completing them. Finish three challenges and you’ll obtain the VECH-tor Graphic ECHO Device Skin, finish six and you’ll get the Retro Outrunner Weapon Trinket, and finish 10 for the Framed Firewall Room Decoration. The best rewards are saved for those who finish most of the challenges though, with the Hotline Pandora Vault Hunter Head and Death by Filigrees Vault Hunter Skin being rewarded for 14 and 18 challenges respectively.

Make sure to take part in the Revenge of the Cartels event when it goes live via a patch on 23rd April. It’s free, after all.