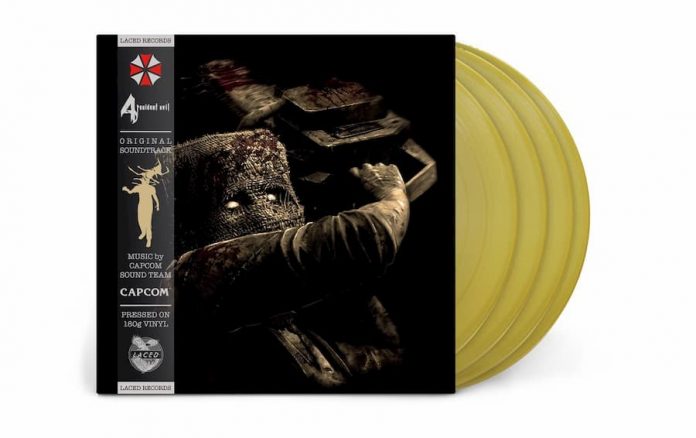 Dance and bop to the spooky sounds of Resident Evil 4 coming to vinyl.

Laced Records and Capcom are teaming up once again to bring Resident Evil fans another gorgeous vinyl collection. This time around, that vinyl collection is for the iconic Resident Evil 4. Pre-orders are available now for the collection, which features four LPs with remastered audio from the 2005 Nintendo GameCube title. Its fantastic sleeve artwork is by Boris Moncel.

Resident Evil 4 was a title that masterfully redefined the survival horror genre, turning it from survival horror into an action adventure which brought in a tonne of players new to the series. Having this collectible is for serious fans of the series.

The Resident Evil 4 soundtrack is known for its unsettling sounds, making players feel like they’re rightalongside Leon S. Kennedy. This remastered soundtrack will be pressed onto audiophile-quality, 180g heavyweight vinyl LPs, and will be be housed in a gatefold box set.

Two editions of the soundtrack will be available. The Standard Edition will come printed on traditional black discs, and the Limited Edition will have “muddy gold” coloured discs. Both are priced the same, but expect the gold discs to sell out quickly.

Laced Records are no strangers to videogame vinyl; earlier this month it announced a partnership with Bandai Namco, bringing nine Tekken soundtracks to print.