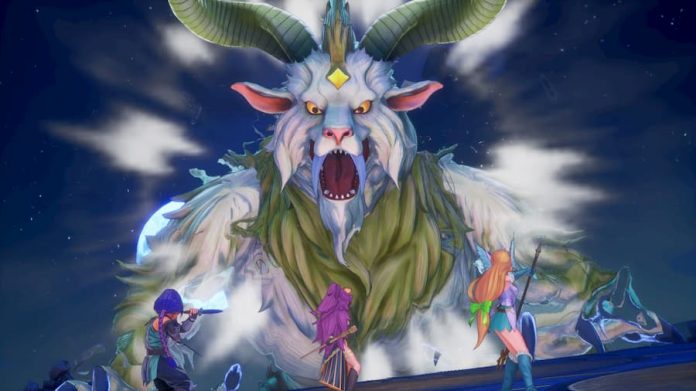 If you’re looking for a good, old-fashioned Japanese RPG adventure, you really can’t go far wrong with Trials of Mana.

Just don’t expect too much from it. As a modern revival of a classic game, it feels faithful to the series and to the genre. But as a modern game, it feels bogged-down by old-fashioned systems and offers very little that’s new or exciting. Still, it looks nice, plays smoothly, and it’s got an excellent soundtrack; so there is all that.

Trials of Mana starts by having you choose your three protagonists. You’ve got six party members to choose from and, in what’s perhaps the most intriguing thing about the game, its story will differ slightly depending who you choose. Though no matter who you choose you’ll follow a similar path – to retrieve the Sword of Mana and ultimately save the world, blablah – but each character has a slightly different reason for wanting to do so. Lion-haired warrior Duran wants to avenge his father, for example, while fair maiden Riesz wants to find her younger brother. As such, each character has their own story beats, and who makes up your party will influence how the story plays out.

It’s a neat touch, knowing I might not have fought the same hulking boss at the end of the game had I chosen a different party. But it’s not enough to make me want to play Trials of Mana again with different characters. The main meat of the game remains unchanged so other than a few different cutscenes – and some different combat moves for your characters – there’s nothing worth making a second 20-hour playthrough for.

Plus, there’s the fact that it takes a while for Trials of Mana‘s gameplay to open up. The first several hours feel very linear, and you’ll find yourself travelling up and down the same paths, feeling little more than a messenger than a hero. You’ll come across enemies to fight, sure, and the odd fearsome boss, but you’ll also get bored of seeing the same few areas. 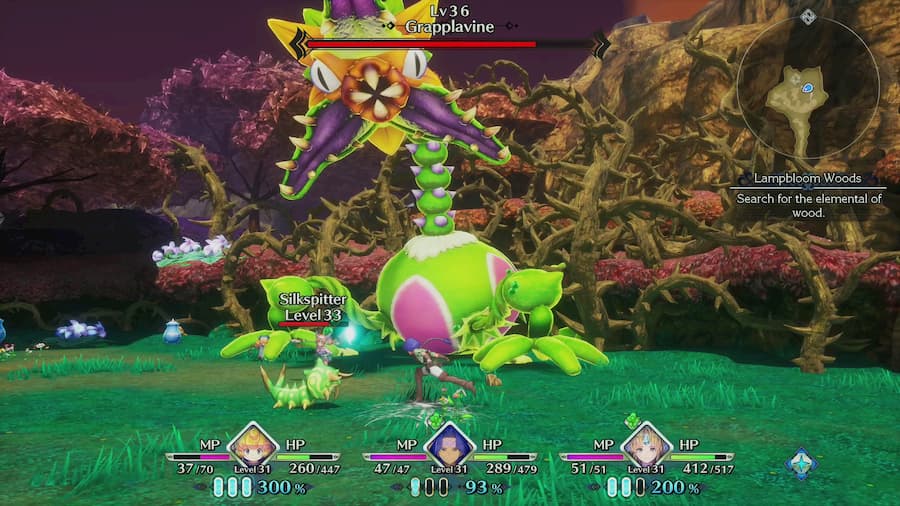 It’s not really until the half-way point that you’re given any semblance of freedom. You’ll be given the Ferry Flute, a magical item that allows you to summon Vuscav. He’s a huge turtle-like creature who can ferry you across Trials of Mana‘s oceans, reaching new areas. Soon after, you’ll also be able to summon flying creature Flammie, with whom you can travel through the skies. With both of these creatures at your disposal, you finally feel like Trials of Mana‘s world is yours for the taking. You don’t have to head straight to your destination if you don’t want to; you can take time to explore the game’s wonderful and quirky villages.

There’s little point in exploring, however. It’s not a game that overloads you with side quests; outside of a non-essential objective to find little cacti hidden around the world, there’s not much else to do. It’s a shame, because Trials of Mana‘s world is beautiful, but the linear nature of the story makes it feel like much of it is wasted. 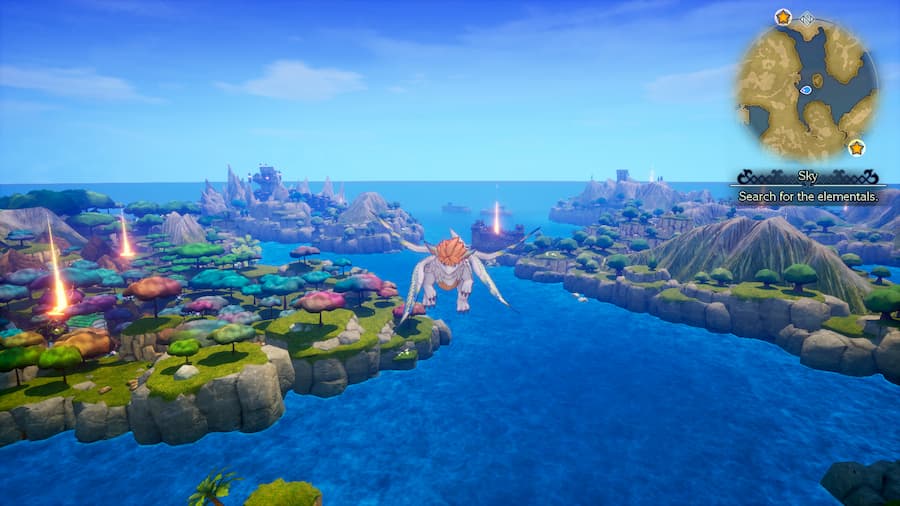 Not that you get a whole lot of time to take in your scenery anyway, because you’ll be spending a huge amount of your time in combat. Enemies densely populate each area, so you’re never a few seconds away from entering into another fight. Pleasantly, combat blends seamlessly into exploration; there are no annoying announcement screens or loading times. As soon as you cross an enemy, it’s time to draw out your weapon.

For the most part, combat is fast and fluid. Each character has two primary attacks: light and heavy, which can be chained together for maximum damage. You also have a power attack, which can be used sparingly providing you have enough charge. Add to these consumable items that can be used to deal damage to enemies, the ability to switch between party members on the fly, and magic spells which can be used by some characters, and you have quite an impressive arsenal.

Sadly, combat can get quite repetitive. With Duran as my primary party member, I was bound to melee attacks, and hammering light and heavy attacks soon became dull. Sure, getting a new weapon (which mostly have to be purchased from shops) can spice things up a bit, but your attacks always remain the same regardless of what weapon you’re wielding. Fighting can also be annoying if you’re in a tight space (you often are) thanks to the camera. Unless you’re locked onto an enemy, you have free reign of the camera – but it’s still difficult to get a good view of the action. Locking on poses its own frustrations too; as much as accidentally nudge the right stick and your target will change. Doing so also removes camera control from you, which makes getting a clear view even more difficult.

For the game’s second half, I all but gave up on fighting small-fry enemies, instead choosing to escape battles as soon as I could. I missed out on experience but it turns out that levelling-up is fruitless anyway; the bosses you need to face seemingly level up with you, so they’re always a few steps ahead. If you fail to beat them, grinding enemies to get tougher isn’t an option, because the bosses will just get tougher alongside you. You do earn money in combat though, and purchasing new weapons and armour is a sure-fire way of eking out some extra hit points and defence. 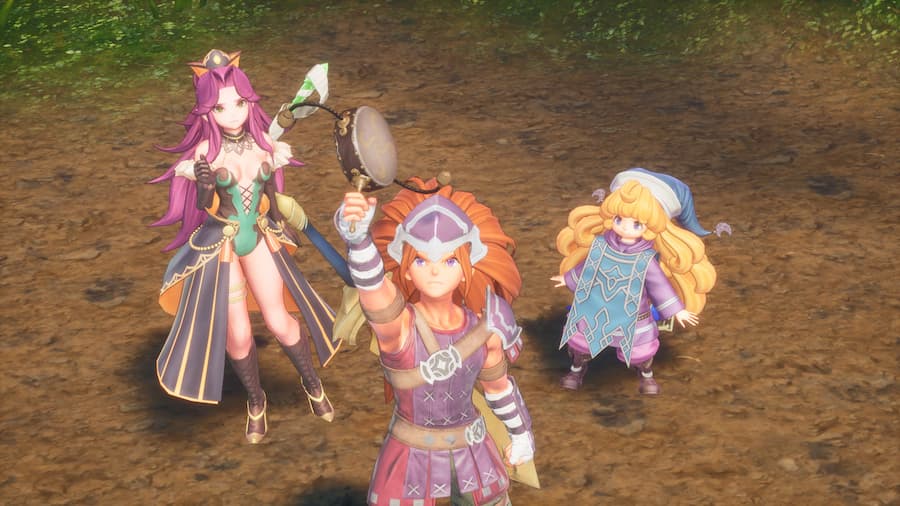 There are a lot of bosses in Trials of Mana – and annoyingly, you’ll be facing some of them twice; early bosses showed up again in the game’s final chapter. Despite that repetition though, most bosses provide a formidable and enjoyable challenge. They’re wonderfully designed, and while some of their attacks occasionally feel cheap, there’s a real sense of achievement when one of them falls. You’ll want to make sure you’re fully prepared before going into a boss battle, though. Regardless of what’s in your inventory, you can only ever use nine of one item, and you can only access what’s in your quick-access wheel. If you’ve got potions in your inventory but forgot to assign them to your item wheel, bad luck.

For how nice Trials of Mana looks and how wonderful its soundtrack is – featuring new compositions from Hiroki Kikuta – there’s one major thing letting the audiovisual experience down: the voice acting. It’s abysmal. Some characters are passable, while others (Reisz especially) sound jarringly wooden. Other NPCs are laughably bad, and the recording quality of some voices is noticeably worse than others. All in all, it’s a bit of a disaster, and really stands out in what is otherwise a well-made game. It’s probably wise to switch to Japanese voices.

As awful as the acting is though, it’s not enough to completely ruin Trials of Mana. If you’re a fan of JRPGs you’ll find a lot to like here. It looks great, it’s easy to play, and it’s not the longest slog in the world – you’ll see the credits roll in about 20 hours. Sure, there are a few frustrations, but it remains true to the Mana series and overall provides an enjoyable – if a little uninspiring – adventure for fans of the genre.

Trials of Mana is available on PC, PS4 and Nintendo Switch. We reviewed the game on PS4 with a code provided by the published.