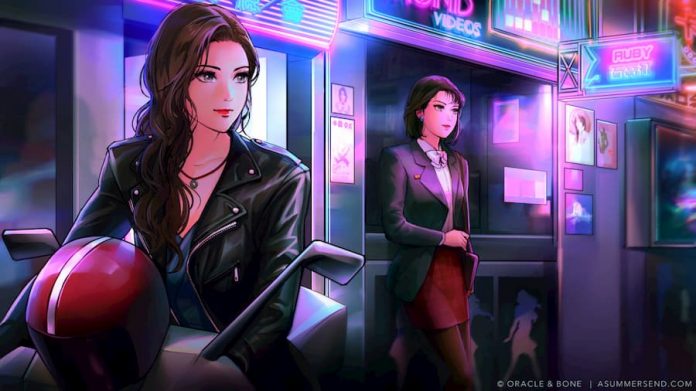 Forbidden love in Hong Kong sounds like just the kind of story I want.

Transport me to the 1980s and there you have it, I’m hooked. There’s nothing quite like the fashion, music and overall atmosphere of the 80s – and developer Oracle and Bone have portrayed that perfectly in visual novel A Summer’s End: Hong Kong 1986.

It tells the story of Michelle, a young secretary and businesswoman living in Hong Kong with her mother. Michelle completed schooling and began working after her father died so that she could support her and her mother. After an incident where Michelle breaks her shoe, she heads to a nearby marketplace to have them fixed. There she meets a cobbler’s daughter named Sam and an attraction between them is instantaneous.

Michelle can’t help but be attracted to the eccentric and outgoing Sam; and Sam, who seems pretty experienced in the romance department, tries her best to make Michelle see that they can have a great relationship together.

Michelle and Sam’s story is one that many of us have heard before: forbidden love. But in this classic case of Romeo and Juliet (or Juliet and Juliet) the two protagonists are forced apart by cultural taboos and sexual confusion. Michelle’s mother could never understand her being interested in women; and Sam lives in a world of bright colours, loud music and fun – very different from Michelle’s lifestyle. The two don’t seem like a compatible couple, but different events throughout the story bring them together in unexpected ways. 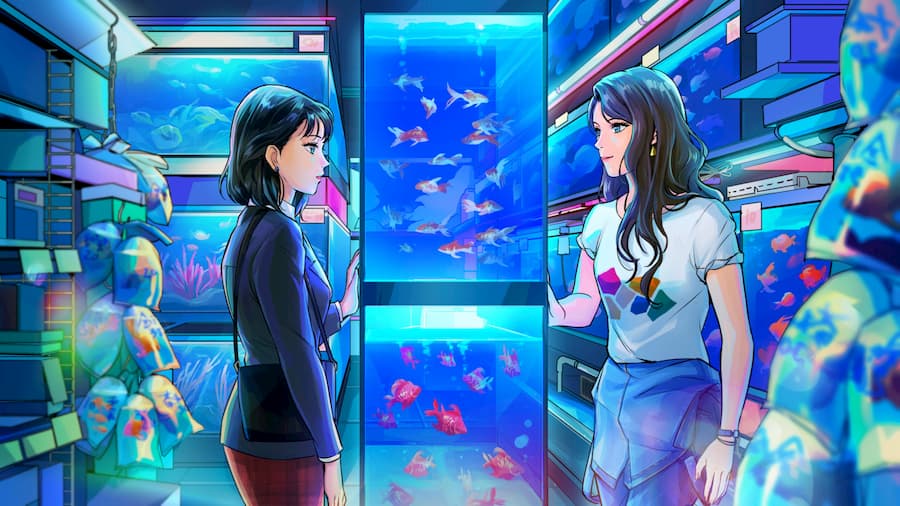 Unfortunately, A Summer’s End’s characters feel a little dull among its lavishly unique setting. Michelle simply isn’t a very nice person, especially in the beginning. It’s understandable that she would feel detached from the rest of the world having been overworking and isolating herself for a year to support her family – but even when she starts to open up, she remains reserved and unrelatable. Sam is an intriguing character, but for most of the game it seems unlikely that she would be interested in a girl consistently pushing her away and remaining distant. I suppose love conquers all, but in this case these character’s connections just didn’t seem realistic.

A Summer’s End’s dialogue also tends to repeat itself quite often throughout the game. Michelle says, “Eh?” what feels like every other word and Sam uses the phrase, “I see…” far too often. Ellipses and grammatical errors are also common within the text and the dialogue in general is awkward at best. Where the dialogue is strongest is when characters are speaking about pop culture – but their in-depth knowledge of Asian actors and actresses as well as pop icons don’t lend any help to the story building. 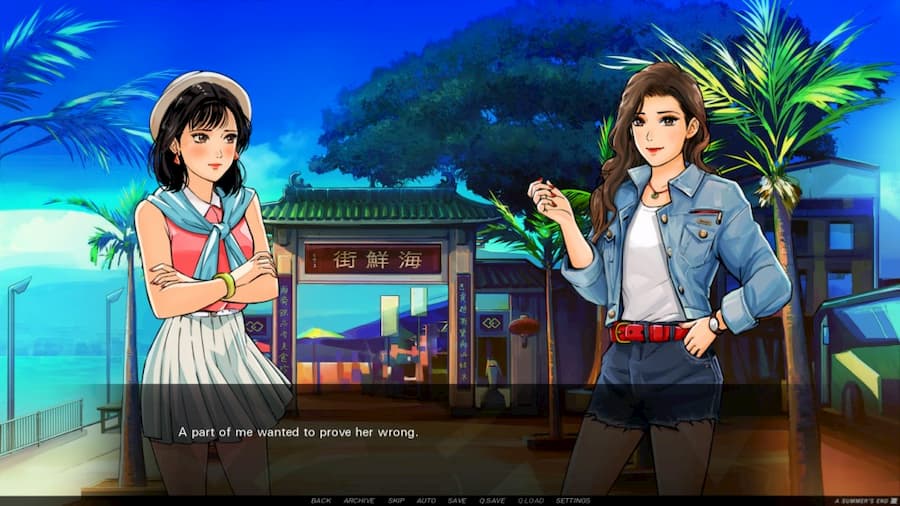 A Summer’s End’s strength lies in its setting, art and music as well as its general concept. The 1980s feels like the perfect backdrop for a “forbidden romance”. The world is vivid and loud and the people even more so. It was a time of adventure and unique styles, and this is portrayed with the utmost detail in the game. Hong Kong is ever-bustling and each hand-drawn setting is gorgeous. The 1980s-inspired electronica music that accompanies each setting fits perfectly and the art style itself ties everything together into a perfect bow.

While A Summer’s End: Hong Kong 1986 isn’t without its downfalls, I’m glad it exists. The dialogue needs some work, but it’s still a valuable addition to the visual novel genre. Not only because of its awesome setting, but because it’s exciting to see a project proudly and loudly waving its LGBTQ+ story. With two different endings, A Summer’s End is worth two playthroughs – even just to admire the fantastic artwork, music and creative concepts a second time around.

A Summer’s End: Hong Kong 1986 is available on PC. We reviewed the game with a code provided by the publisher. 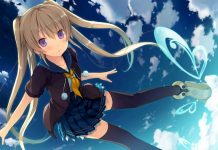