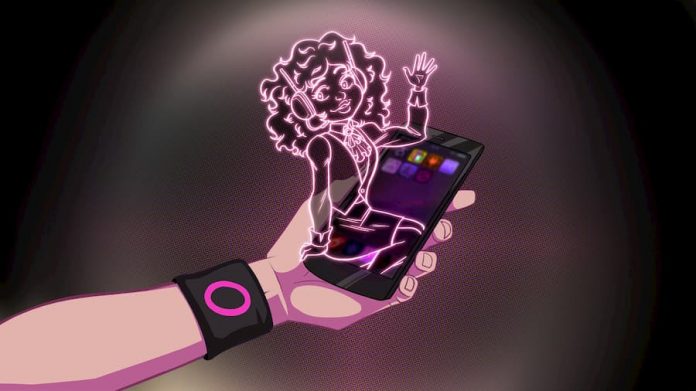 Arcade Spirits bills itself as a “romantic visual novel”, but to me that feels like a disservice; it’s so much more than that.

Sure, this arcade-dwelling slice-of-life story offers up the possibility of romance, but how heavily the game focuses on finding love is ultimately up to you. You take on the role of a young adult, fresh out of work, who finds themselves with an opportunity to start a new job in an arcade. It’s up to you who that protagonist is; you can tweak their appearance and change their name. I went with the default option given to me; Ari Cader, a young woman who believes it’s her family destiny to have forever bad luck.

The arcade she finds herself working at, the Funplex, is rather run down, but thanks to its eccentric old owner and its enthusiastic staff and regulars, it has a lot of spirit. Ari accepts the role of assistant – and quickly finds herself at home in the arcade.

Arcade Spirits‘ story, told over eight chapters taking around 6-8 hours to complete, is simply delightful. It’s told in a coherent and intelligent way; throwing in video game and pop culture references galore. They never feel forced in, though – they’re there to make the setting of the game feel realistic. And even though it’s set in an indeterminate year in the future, where the arcade gaming market is still as big as the console market, everything Arcade Spirits throws at you feels believable. Well, almost.

The exception to that is Ari’s artificial intelligence AI, IRIS. She’s a super-powered personal assistant; imagine Alexa, but she’s become sentient. It’s heavy sci-fi stuff, but it’s easy to suspend disbelief for the sake of Arcade Spirits‘ narrative. Here, IRIS provides a backbone to the story. Her role is important – she’s the one who found Ari the job at the arcade, and she’ll occasionally meddle in ways that mobile phone AIs should not – but the human bonds that Ari forms remain the most important part of the tale. 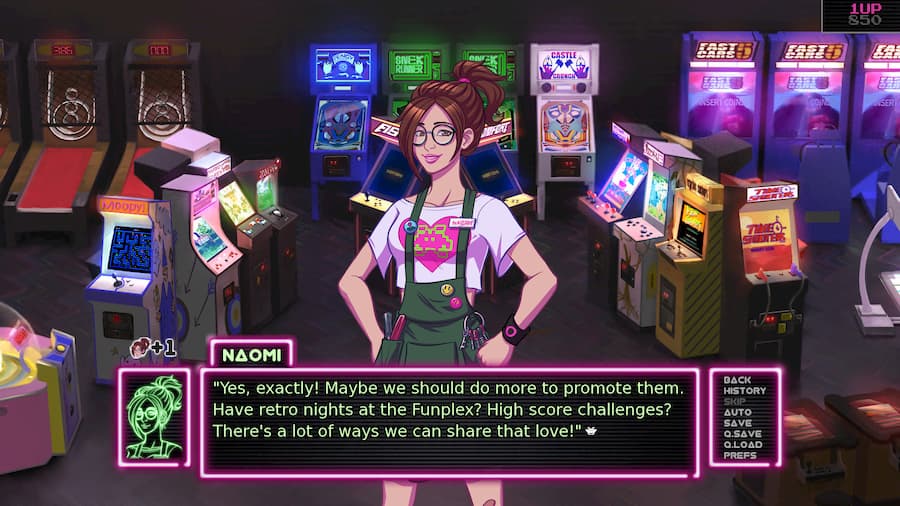 IRIS’ secondary role is providing you with stats that you can keep track of as you play through Arcade Spirits. She tracks your relationships with each character, letting you know who you’ve formed the closest bond with. She also monitors your personality based on reactions and choices you’ve made. How your personality is shaped does have an impact on the game; there’ll be important decisions that you come across, and only the options that closely match your personality type will be available. So, if you’ve played as a loving and considerate character throughout, the option to suddenly be bold or gutsy might not be available to you.

It’s hard not to immediately become enamoured with Arcade Spirits’ cast of characters. They’re all expertly written, brought to life with excellent character art and believable dialogue. Which characters you become closest to is entirely down to the choices you make. You can choose to remain close friends with all of them, or you can potentially romance any of them, too. Arcade Spirits is wonderfully inclusive; the gender of the lead character is your choice, and you can choose to romance anyone you wish. 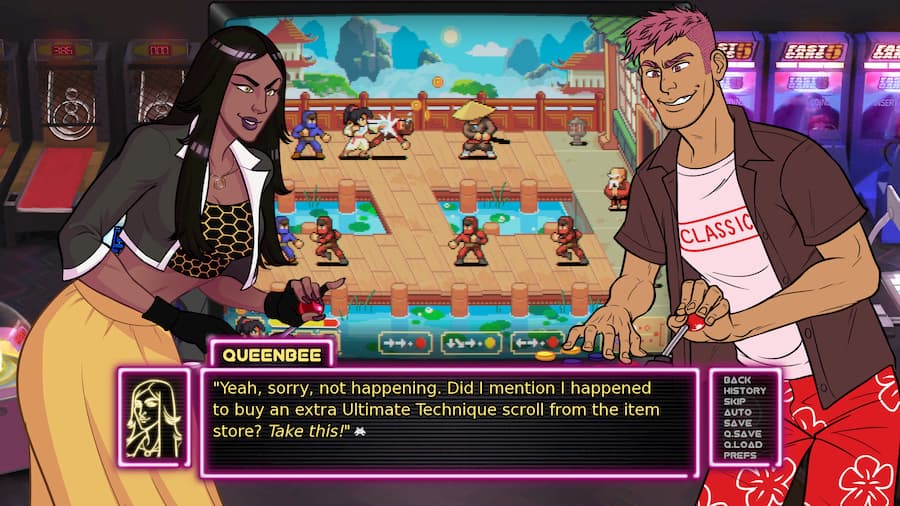 “It’s rare a visual novel has managed to engage me so much, and that’s a testament to Arcade Spirits’ excellent writing”

My biggest bugbear with Arcade Spirits‘ characterisation, however, is that characters are only partly voiced. Ari, the lead character, is never voiced (because their gender is your choice, presumably), and every other character will only speak a line occasionally. The voice acting is, for the most part, passable, but it’s never at a very high standard. It’s irregular enough to never be a problem, but it can be jarring when you’re used to reading text to yourself to suddenly hear dialogue being spoken. Equally annoying is when a character has a voiced ‘catchphrase’ that doesn’t quite match up with the subtitles.

It’s not enough to spoil the experience of playing, though. I still found myself hanging onto every word of Arcade Spirits‘ story that played out, painstakingly dithering over options presented to me. I came to care for Ari, the arcade and her friends; I wanted to make the best choices for them. And when shocking revelations came up in the narrative – no story is smooth sailing, after all! – I genuinely felt the emotions of the on-screen characters. I felt their suffering; their sadness; their elation. It’s rare a visual novel has managed to engage me so much, and that’s a testament to Arcade Spirits’ excellent writing. 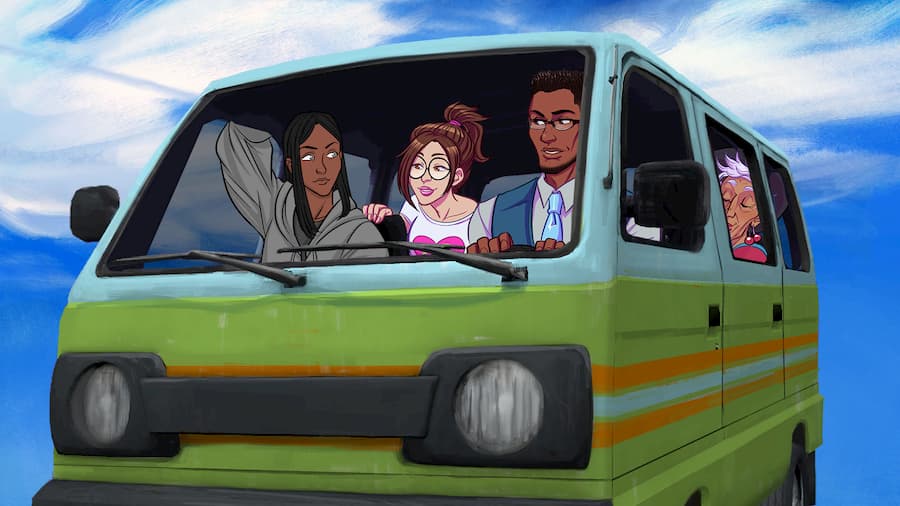 It’s refreshing to play a visual novel that, despite having elements of fantasy and sci-fi, still manages to feel so grounded in reality. Playing the game, I couldn’t help but picture actual arcades I’ve visited. I could imagine myself in my lead characters’ shoes, and it meant every decision I made while playing felt more important. I was pleased with the outcome I got as Arcade Spirits‘ credits rolled, but there’s enough of a reason to go back and play again. Your choices really do make a difference, so I’m curious to see how else the story could have played out. The option to fast-forward through dialogue makes it a much more enticing prospect, too.

If you enjoy getting lost in a great story based around realistic characters, then you shouldn’t hesitate to play Arcade Spirits. Its story throws enough twists and turns to keep you captivated for its six to eight-hour runtime, and it’s hard not to get invested. It’s a shame the voice acting is inconsistent, but it’s not enough of a bugbear to ruin what is otherwise an excellent visual novel.

Arcade Spirits is available on PC, PS4, Xbox One and Nintendo Switch. We reviewed the game on an Xbox One X with a code provided by the publisher.