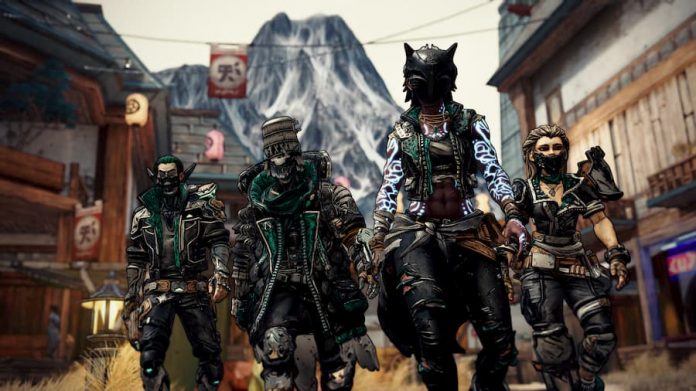 The third paid campaign add-on for Borderlands 3 has been revealed.

Launching 25th June on PS4, Xbox One and PC, Bounty of Blood: A Fistful of Redemption will feature a whole new setting as well as an entirely new cast of characters.

The Devil Riders, a dastardly gang of bandits that have been terrorising the town of Vestige, are your targets in Bounty of Blood: A Fistful of Redemption. Located on the dusty planet of Gehenna, your actions as you take down The Devil Riders will have a direct impact on the town of Vestige. How you interact with new faces such as Rose, a katana-wielding warrior, and Juno, a rough-and-ready brawler, will have an effect too.

Spicing things up in the expansion are four new interactive objects that will aid you both in combat and exploration. Breezebloom, for example, will boost your Vault Hunter up high, enabling them to reach otherwise inaccessible areas. Traitorweed, on the other hand, temporarily turns enemies into allies when shot.

To traverse the lands of Gehenna quickly, you’ll be able to make use of a JetBeast hoverbike. Even better, you can customise it with weapons if you wish, enabling you to kill while moving at speed. And of course, Bounty of Blood: A Fistful of Redemption will also introduce plenty of Western-themed loot to the game. It wouldn’t be Borderlands 3 without loot.

Before Bounty of Blood: A Fistful of Redemption lands, however, Borderlands 3 fans have something else to look forward to: Takedown at the Guardian Breach. A new endgame gauntlet that scales to the number of players present, it takes players on a reconnaissance mission to the planet Minos Prime in order to locate the source of a Guardian signal. Featuring new enemies, environmental puzzles and low-gravity sequences, it offers players the opportunity to have fun and obtain powerful loot providing they can take down a miniboss and final boss when it launches on 4th June.

For more information about Takedown at the Guardian Breach and Bounty of Blood: A Fistful of Redemption, check out Episode 7 of The Borderlands Show below.