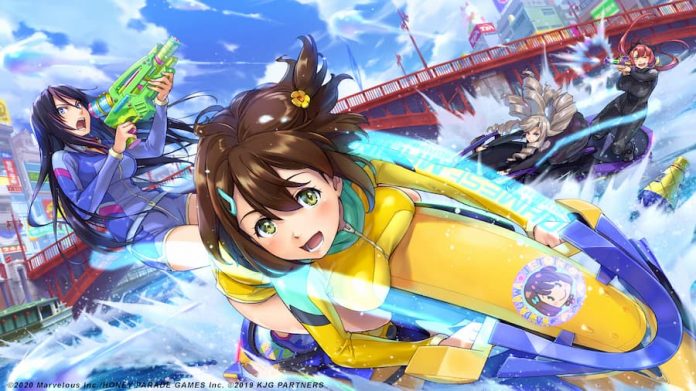 Launching on PS4 and PC this summer, Kandagawa Jet Girls transports players to a future Tokyo, in which high speed jet racing is a popular sport. Drivers, known as Jetters, team up with shooters equipped with water-powered weapons; as such, driving fast isn’t the be-all and end-all. To impress the audience and gain boost, you’ll need to perform stunts, blast opponents, and avoid hazards while putting up a good race.

Like the Senran Kagura series, Kandagawa Jet Girls will feature lots of customisation. Special effects can be tweaked, as well as the look of your team and its machine. Some of the Senran Kagura girls will appear in the game, too. Ryōbi and Ryōna are included from the outset in the western release of the game, and Asuka and Yumi will become available as DLC after launch.

Promising a single-player mode that consists of 64 episodes of lighthearted racing drama and online multiplayer, the standard version of Kandagawa Jet Girls will be available digitally on the PlayStation Store and Steam for $49.99. A physical ‘Racing Hearts’ day one edition is also planned for PS4 which will feature a 64 page artbook and 2-disc soundtrack. That will retail for $59.99. Check out the opening move for the game below.