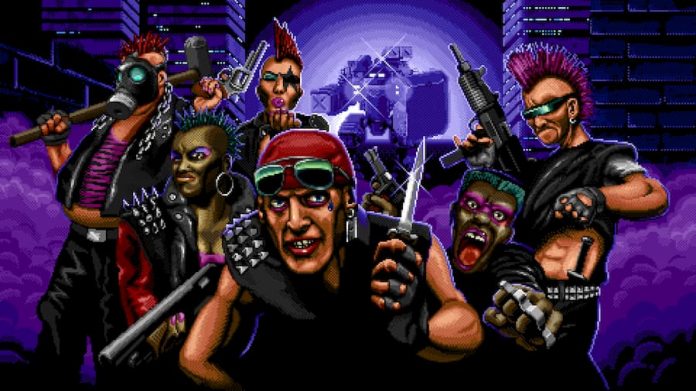 Do any games present the future as being anything other than a dystopian nightmare?

It matters not, though, when games are as fun as Huntdown.

The world has gone to shit and corporations control many peoples’ lives, but as usual, numerous gangs outside of the system have risen up to cause trouble in Huntdown‘s dark and dirty world. As a bounty hunter, you’re also outside of the system, however, and those rival gangs present the perfect opportunity to kick some ass and earn some cash.

Channelling the spirit of the likes of Duke Nukem, Huntdown is a game all about macho action and cheesy one-liners. You’ll run and gun, albeit on a 2D plane, and if an enemy gets too close you’ll introduce it to your boots, kicking it back so you can shoot it some more. Needless to say, it’s over-the-top and brash, but it’s also a hell of a lot of fun.

Huntdown‘s 20 unique missions are doled out in groups of five by a mysterious handler. Each bunch will have you going up against one of four troublesome gangs, with you starting at the bottom rung and making your way up to the big boss. Each level is short but sweet, packing in heaps of action before ending with a memorable boss fight. So yeah, that means that there are 20 boss fights for you to overcome, ranging from a walk in the park to pulling your hair out and throwing your controller across the room in terms of challenge. 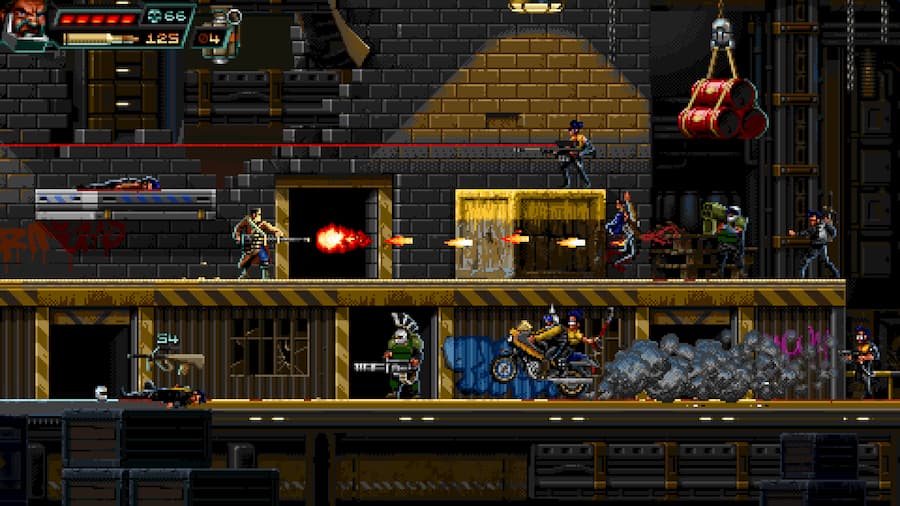 The action itself mixes up traditional run ‘n’ gun shooter gameplay with lashings of cover. When the number of bullets being fired your way can’t simply be avoided by jumping over them, you’re advised to crouch behind objects such as containers or cars, then pop up and unleash some of your own projectile death. Doorways and other entrances can also be used for cover, allowing you to skulk out of harm’s way. Don’t stay there too long, however, or an enemy might come along and introduce your face to the sole of their shoe, or worse.

There are three bounty hunters to take control of: Anna Conda, the loose cannon who doesn’t know mercy; John Sawyer, the lawman who’s now half man, half machine; and Mow Man, a droid powered by banned software. They each come equipped with their own primary weapon that doesn’t run out of bullets and a varied assortment of put-downs, but the most interesting, and powerful, weaponry has to be found in the field. 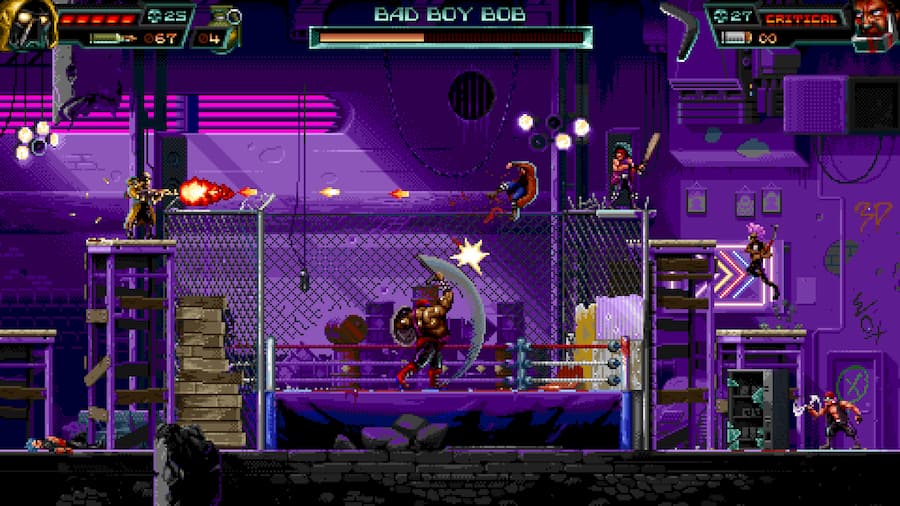 Shotguns, rifles, rocket launchers, laser blasters; they’re all for the taking and more. They’ll run out of ammo eventually, but until then they enable you to butcher your opponents with even more glee than usual. You can even make use of melee weapons such as guitars, baseball bats and samurai swords. And there are throwables. Molotov cocktail, anyone? Every level in Huntdown offers you the opportunity to engage in riotous goon slaughter, and you should accept it.

The question is, can you handle it? Huntdown offers multiple difficulty levels, but even on easy it’s challenging. You need to study boss patterns and learn how to overcome them. Though sometimes, the abundance of enemies in certain areas makes even reaching them an achievement. Things are even tougher for completionists. Three challenges need to be met on each level for it to be considered fully completed: defeating a set number of fodder, finding all secret stashes, and completing the level without dying. 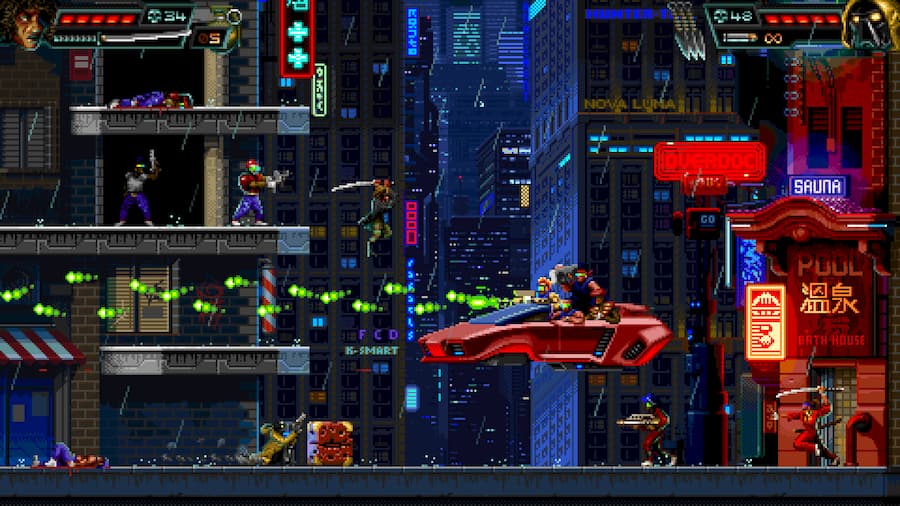 Bounty hunting isn’t something that has to be done alone, however. And with a friend by your side, it’s not only more manageable, but also more fun. Play Huntdown in local co-op and it pays to cover each others’ backs. And not only that, but when you’re downed the other player can at least attempt to pick you back up before having a shotgun introduced to their face.

Some of Huntdown‘s boss battles might have elements that feel a little unfair, especially on higher difficulty levels, but it can’t be denied that it’s a great game with lots of character. It does a brilliant job of feeling like a blast from the past, yet the responsive controls and cover mechanics firmly plant it in the modern age. It’s the best of both worlds, basically, and if you’ve ever enjoyed mowing down legions of goons on a 2D plane while characters’ wisecracks compete against synthesised 80s beats for your attention, you’ll absolutely love it.

Huntdown is available on PS4, Xbox One, Switch and PC. We reviewed the game on Xbox One X with code provided by the publisher.