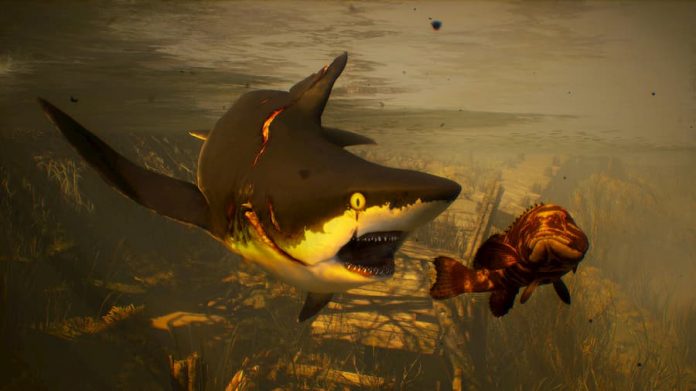 Maneater makes you a big fish in a shallow pond.


I was in seventh heaven when Maneater was announced. I’d ploughed hour after hour into Jaws Unleashed and the prospect of sinking my teeth into the spiritual successor to Majesco’s now-deleted shark ’em up filled me with gruesome glee. After all, what could possibly go wrong with a game where you play as a shark? Quite a lot, as it turns out.

Maneater casts you not as a Great White but a baby bull shark, your mother having been slaughtered by shark hunter and reality TV star Scaly Pete. Starting out in a murky swamp and moving on to other interconnected locations, your objective is to grow in size and ferocity until you’re in a position to take on Scaly Pete himself. In the short term, you find yourself fleeing alligators and other predators, but in a relatively short period of time you’ll be capable of chowing down on swimmers, taking out paddleboats and becoming the kind of menace that any right-thinking mayor would shut the beaches for.

“For a while, Maneater gave me the human-crunching, boat-smashing buzz I’d been craving”

The further you progress through Maneater, the more upgrades you can apply to your ever-growing shark, using the resources you get from munching on swimmers or other sealife. The more aggressive you become, the more determined the local shark-hunters get. As such, it’s in your own interests to power-up your seagoing nightmare. There’s even an unlockable skin that turns your bull shark into the kind of bio-luminescent lifeform that Avatar‘s Jake Sully would happily plug his hair-wang into, the dirty, dirty boy.

And, for a while, Maneater gave me the human-crunching, boat-smashing buzz I’d been craving. I grinned like an idiot as I leapt out of the water, smashing back down on the opposite side of a boat. I took pride in hearing swimmers panic as they glimpsed my shark’s fin; and I felt like an aquatic badass as, leaping briefly onto a beach, I snapped away at the hapless sunbathers. 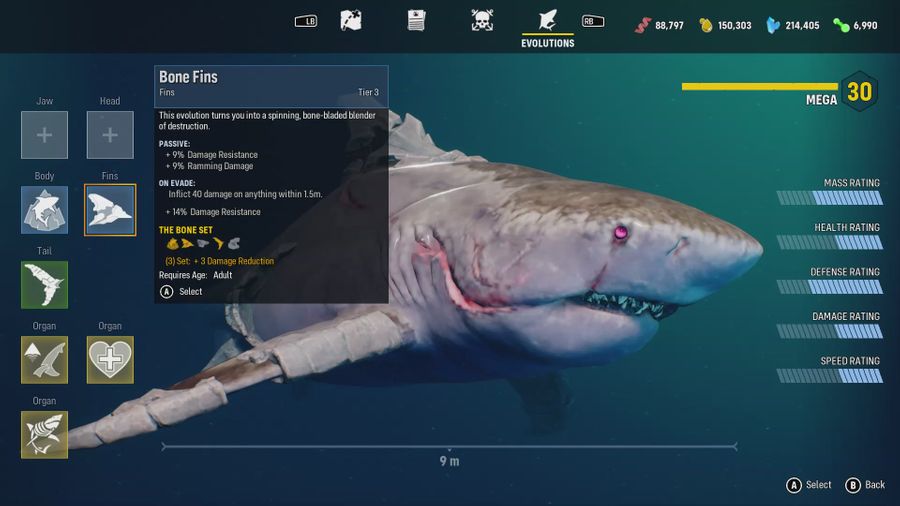 But once you’ve stopped showing off and start trying to follow the game’s “story” you start to discover what a tedious grind this shark tale is. Take the “Big Mack” mission; the title is enough to fill you with anticipation. Could it be that, since Scaly Pete barely puts in an appearance, Maneater is going to pit us against a new foe?

No. “Big Mack” just means you have to go to a specific location and eat ten mackerel.

Oh well, maybe Tripwire is using these missions to pad the story out. This next mission sounds interesting… “Cave in!”. Maybe your vengeful shark has to dive beneath the sea bed, destabilising a cave system to bring down the oil rig above it!

Oh. You have to go to a cave and eat ten mackerel.

Well, this next one must be something different, right? “The Sport of Kings”. Maybe you’re going to disrupt a water-polo session, invoking the wrath of a wealthy local businessman.

No, you have to swim to a sunken golf course and eat ten mackerel. 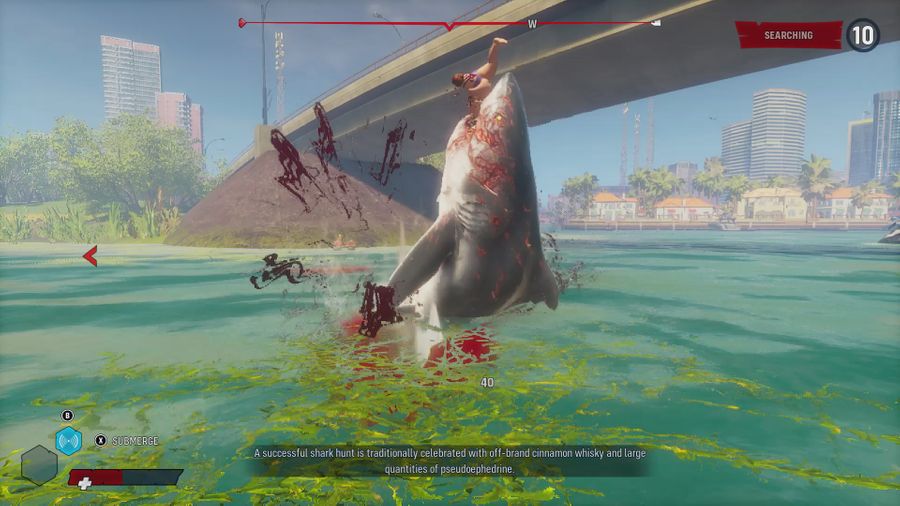 “The bulk of Maneater is sheer cutscene-free padding, nothing else”

All but a handful of the thirty or so story missions have you travelling to some location and eating or destroying animals, people or, if you’re lucky, a boat. None of them add to the story – and it gets worse. Once you’re about halfway through Maneater, it starts insisting you complete 50% of the collectable missions/side-quests in each area before proceeding. The bulk of Maneater is sheer cutscene-free padding, nothing else. There’s a reasonably diverse selection of locales, from bayous to upscale beaches, but all have you engaging in the same boring busywork.

The missions that involve combat, such as fighting an amped-up Killer Whale, don’t do anything to alleviate the tedium. Beating an animal enemy boils down to getting up close and hammering the bite button. Yes, you can spin and dodge, but there’s no way of locking onto your enemy so those manoeuvres become next-to-useless. The only time dodging is effective is when you’re being pursued by shark hunters, having raised your watery wanted level to a sufficient level. 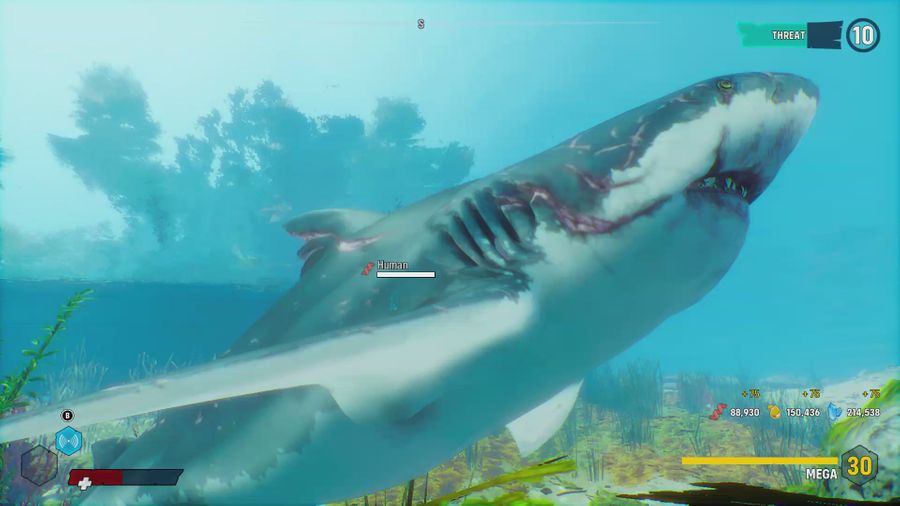 “If you’re looking for a Jaws-style game of cat-and-mouse, you won’t find it here”

But there’s little joy to be found here either; it doesn’t matter how stealthy you try to be; once you’re in range, every shark-hunter, even the basic swamp-boat riding ones can track you with Terminator-like precision. The only time stealth comes into play is when you’re sneaking up on swimmers or when you flop your way into a swimming pool to avoid hunters. If you’re looking for a Jaws-style game of cat-and-mouse, you won’t find it here.

Maneater tries to use humour to mask its woeful lack of variety, but it doesn’t work – though the voice actor who provides the acerbic commentary deserves a medal for trying to do so much of the heavy lifting. Yes, Maneater, we know the Fyre Festival happened, but the gag would be funnier if it wasn’t tied to one of the many, many collectibles you’re forcing me to pick up in order to progress. 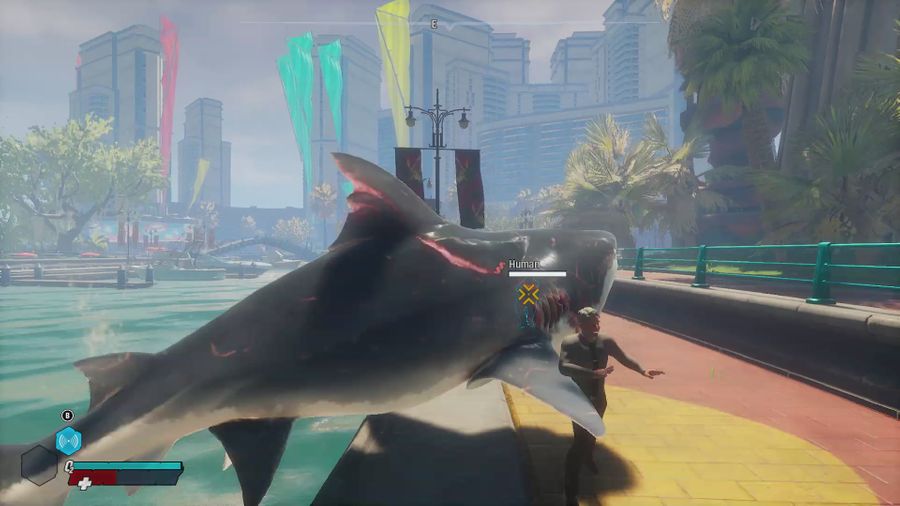 Once you finish the story – which boils down to about five minutes worth of plot – you have the freedom to explore the whole island (loading screens do pop-up between areas). But the post-game activities – the ones that you engage with to 100% a game – are the same activities you’ve been grinding your way through to “complete” Maneater. Your average shark might not be interested in putting the world to rights, but it’s hard to connect with Maneater‘s world when you barely make a ripple.

The game has its moments, and just roaming around is good for a couple of minutes of watery entertainment. But its clunky combat and repetitive, tedious gameplay means that, despite its toothy protagonist, Maneater lacks any bite.

Maneater is available on PC, PS4 and Xbox One. We reviewed the game on Xbox One with code provided by the publisher.

Want to buy Maneater and also support GameSpew? Use our Amazon affiliate link. It won’t cost you anything extra, but we’ll get a small slice of the purchase.