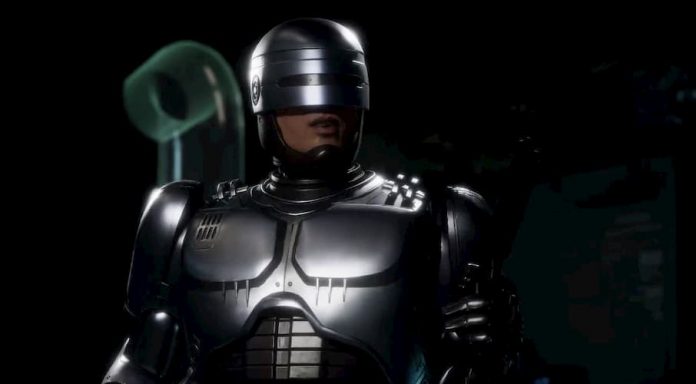 Arriving on 26th May, Mortal Kombat 11: Aftermath expands the story campaign of Mortal Kombat 11, adding a brand new narrative “centred around trust and deceit”. Fire God Liu Kang is now the keeper of time and protector of the Earthrealm, but he needs some help in saving the world. Enter new playable characters Fujin, Raiden’s brother and the God of Wind, Sheeva, half-human half-dragon queen of the Shokan race, and, uh, RoboCop.

Yes, that RoboCop. He’ll be a playable character alongside all of Mortal Kombat‘s legendary characters. Hey, when it comes to saving the world, you’ve gotta do what you’ve gotta do.

Alongside the release of Aftermath, owners of Mortal Kombat 11 can enjoy a free update which will add new stages, Stage Fatalities, and the ‘Friendships’ feature from the 90s, allowing you to take down opponents with “a hint of kindness”. The Klassic Dead Pool and Soul Chamber arena will make a return, each with a unique finisher.

Here’s the bad news. If you want to enjoy the kontent (that was a typo, but let’s go with it) of Mortal Kombat 11: Aftermath, it’ll cost £34.99, or £39.99 if you wish to buy it bundled with the existing Kombat Pack, which includes six DLC characters. It’s a bit pricey, but if you enjoyed the campaign content of MK11 and want more of where it came from, that’s what it’s going to cost you.

Mortal Kombat 11: Aftermath will be available digitally from 26th May on PC, PS4, Xbox One, Switch and Stadia.