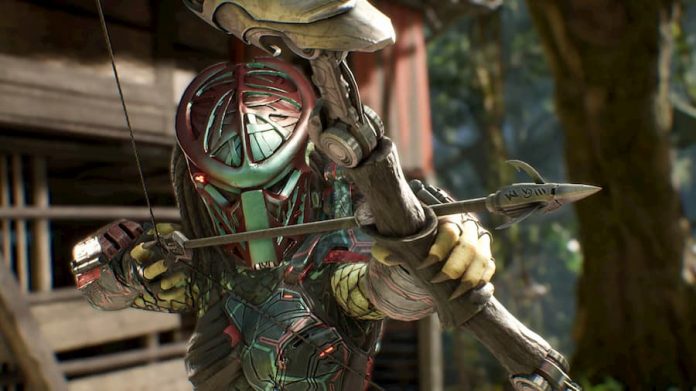 The success of Dead by Daylight proves that asymmetric multiplayer games can work given the correct ingredients.

So many have fallen by the wayside though, with perhaps Evolve being the most famous. The next to try to make a mark is Predator: Hunting Grounds, developed by Illfonic which has already had some success with its asymmetric multiplayer take on Friday the 13th. Though while the core of the game has promise, as a package it simply just disappoints.

Pitting a team of up to four humans against a single predator, one thing that Predator: Hunting Grounds seemingly gets right is balance. Go on message boards and you’re likely to see players complaining that the Predator is overpowered, but you’re also just as likely to see many arguing that the combined might of a fireteam is also too formidable. In my experience, a good Predator player will wipe the floor with a Fireteam that simply doesn’t work together, while a poor Predator player has no chance against a group of four looking after each others’ back. It’s when two forces of equal skill collide that the magic happens, and matches become alive.

As the Fireteam, it’s your job to infiltrate a jungle and complete numerous generic objectives; hack a computer, collect cash, blow up an object – you know, the usual. There’s a time limit to contend with though, and local guerrilla forces that aren’t too happy about your presence. Of course, there’s a Predator as well; otherwise, what would be the point of the game? To win, the Fireteam needs to either complete all objectives and then escape via Helicopter, or take down the Predator and defend its body until it can be recovered.

Playing as a Predator is a much more interesting proposition. The ultimate killing machine, as soon as the match starts you can focus on just one thing: hunting. The Predator can run with great speed, but it’s more more effective to take to the trees, running through them like an Assassin’s Creed protagonist set at twice the speed. The Predator can make use of enhanced vision, too, to detect heat signatures and even visualise sound. And along with their cloaking ability and range of advanced weaponry, they’re a force to be reckoned with. Should the Predator kill all members of the Fireteam before the match ends, they can consider it a job well done. 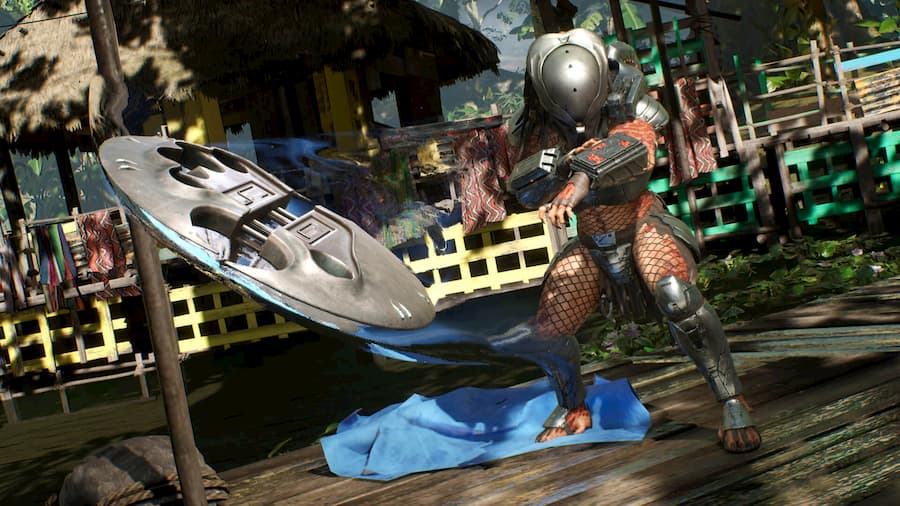 The premise of Predator: Hunting Grounds is fairly simple, then, but it’s perplexing as to why there’s only a hands-on tutorial for playing as the Predator, and even then it’s a fairly poor one. Things are much more involved when playing as a Fireteam, with multiple ways to secure victory, but you’re left to just figure it out yourself. You can cover yourself in mud, for example, which momentarily blocks your heat signature, making it much harder for the Predator to track you. And playing as the Predator, the tutorial tells you nothing about your ability to self destruct when on your last legs, giving you a chance to take a Fireteam member or two with you. Only by digging into the game’s menus will you find information on both.

Not effectively informing players of all the aspects of its gameplay is the least of Predator: Hunting Ground‘s problems in the grand scheme of things though. More problematic is the fact that the generic objectives when playing as a Fireteam means after about 10 matches or so you’re already bored. It doesn’t help that the AI of the guerrilla forces is below par, too. The only real excitement to be found in playing Predator: Hunting Grounds is actually fighting against the Predator, but that generally only accounts for a small portion of each map. 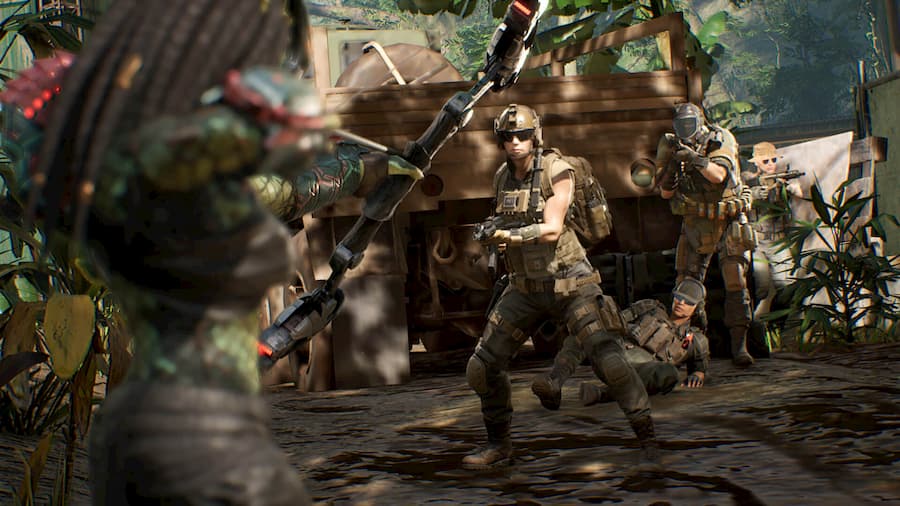 Taking control of the Predator also isn’t as much as it should be. Many will find the controls over-complicated, and, depending on where you start and how good the opposing Fireteam is, you might find yourself spending most of a match fruitlessly searching the jungle for prey to hunt. The worst thing about playing as the Predator though is how long you have to wait to do so. Expect to spend a minute or so matchmaking to join a Fireteam, but up to ten minutes or more to play as the Predator. Chances are you’ll just get fed up of waiting and join a Fireteam instead. 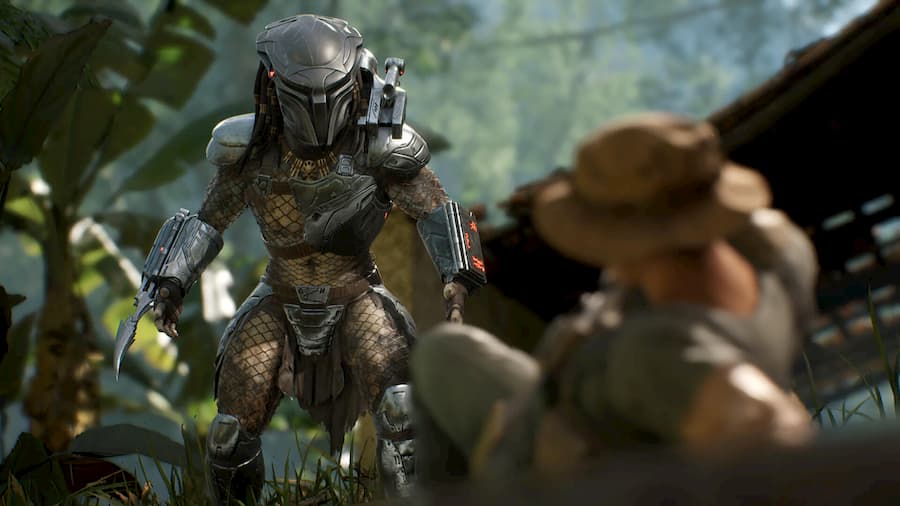 Conversely, when it comes to outfitting and customising your Fireteam member or Predator, Predator: Hunting Grounds is very generous. As you level up, more classes, weapons, gadgets and perks become available for both, allowing you to further define your playstyle and become more formidable. Weapons can also be levelled up, allowing them to be customised to some degree. Unlocking everything available will take a considerable amount of time, but some will consider it worth it. Who doesn’t want to wield a Combistick as the Predator, for example? And of course, there are countless cosmetic items to unlock. Opening loot boxes – sorry, Field Lockers – is the cheapest way to obtain many of them, but they can be directly purchased with currency earned in-game, too.

Predator: Hunting Grounds isn’t a terrible game. Not at all. But it’s just not good enough. The core of the game is decent, but it needs more maps, more interesting objectives when playing as the Fireteam, and simply more polish. On top of that, while playing as the Predator can be fun, you’ve got to be prepared to spend nearly half your time waiting on matchmaking, and then you could just find yourself running around a jungle like a headless chicken if the opposing Fireteam has its collective head screwed on. With a little bit of work and some additional content, Predator: Hunting Grounds could definitely be worth a purchase, but until then, you’re probably best steering clear.

Predator: Hunting Grounds is available on PS4 and PC. We reviewed the PS4 Pro version with code provided by the publisher.

Want to support GameSpew? Buy Predator: Hunting Grounds using our Amazon affiliate link. It won’t cost you anything extra, but we’ll get a small slice of the purchase.