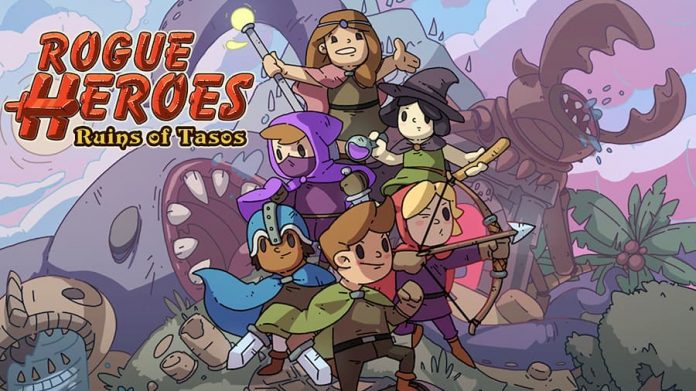 Imagine A Link to the Past, but with multiplayer, and Rogue-like elements. You’re part way to understanding Rogue Heroes: Ruins of Tasos, the upcoming action RPG from Heliocentric Studios and Team17.

The Legend of Zelda: A Link to the Past was one of my favourite games as a kid, so whenever I see a new game that even slightly whiffs of it, I’m there. Even at a glance, Rogue Heroes‘ art style looks like a more detailed riff of A Link to the Past‘s top-down pixels. But to assume that this game is simply a copycat of Zelda is to do it a massive disservice. After a short playthrough of its demo, I’m really excited about what Rogue Heroes: Ruins of Tasos has in store.

It starts out like any typical adventure; our hero wakes up in their bed, somehow chosen to save the world from impending doom. There’s a number of dungeons you need to defeat, filled with evil creatures willing to get in your way. And while you may fail on your first, second or even third attempt, you’ll get stronger every time, each journey bringing you slightly closer to victory.

Rogue Heroes: Ruins of Tasos has Rogue-like elements – but don’t let that scare you away. If you die, you’ll be taken back to the starting point of your village home, but anything you’ve unlocked along the way will remain with you. That means warp points will still be available, and any gems/currency you’ve unlocked will be available to spend on upgrades.

Here’s where things get interesting. Getting killed in a dungeon isn’t exactly a failure, as you’ll net a tonne of gems from your time there. Those gems can be used in your village to unlock new buildings, which then allow you to upgrade your character. Your village is a little bare and run-down as you start, but by spending gems, you’ll restore it; adding magic and medical stores, a blacksmith and more, all at your service. Before heading out into a new adventure, you’ll want to spend your gems to upgrade your health, your magical abilities and your weapon, making you tougher and hardier against enemies. 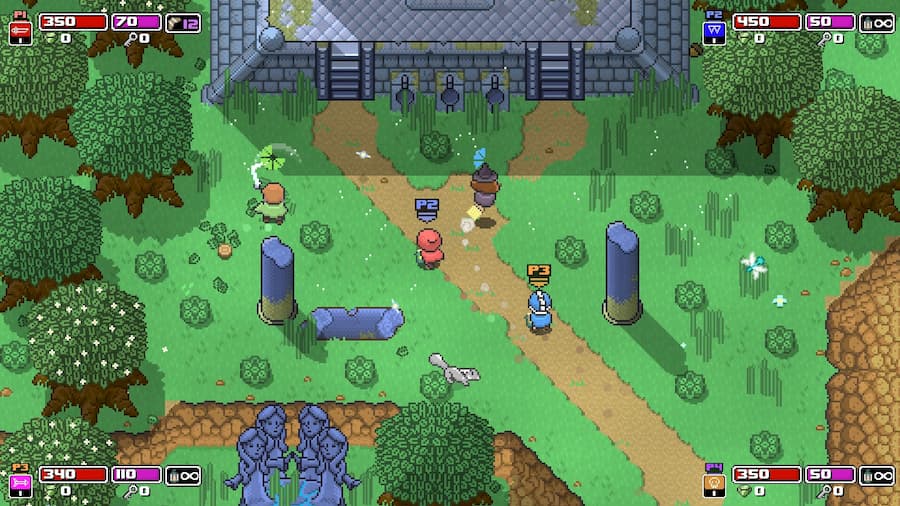 Perhaps the most interesting feature of Rogue Heroes, though – and one I’ve not yet tried for myself – is the fact it supports local multiplayer. In fact, it’s been designed with co-op play in mind, although it’s perfectly serviceable as a single-player adventure too. Up to four people can jump in the same game, tackling foes and finding treasure together.

Whether playing alone or with friends though, you’ll be traversing an open world in order to reach each dungeon. It’s likely here that you’ll be most reminded of those old-school Zelda games; there are secrets to find, side-quests to engage with, and scores of monsters to dispatch. You’ll want to keep your wits about you, because those dastardly beasts are likely to pop out at you when you least expect it.

The same goes for in the dungeons, too. Despite being randomly generated, the first dungeon I stepped foot in felt logical and well-designed. Just like A Link to the Past, you’ll solve light puzzles, uncover secret pathways and dispatch foes left, right and centre – all leading up to a formidable boss fight.

You can’t swing your weapon endlessly; your protagonist has an energy meter, meaning attacks must be measured and purposeful. Mash the attack button too wildly and you’ll find yourself out of energy and open for attack. You’ll want to make use of your shield and be quick on your feet in order to dodge incoming blows. As you explore, you’ll pick up a myriad of throwable weapons too, giving you a range of attacks at your disposal. You’ll want to use them wisely, because death comes all too easily to those who aren’t careful in Rogue Heroes.

But even if you do die, you’re left eager to jump back in and try again; especially with new upgrades under your belt. I’m very impressed with what I’ve played so far, and I’m looking forward to pushing on further in Rogue Heroes: Ruins of Tasos to see what else awaits. There’s no release date yet, but it’s scheduled to release on PC and Nintendo Switch this summer.