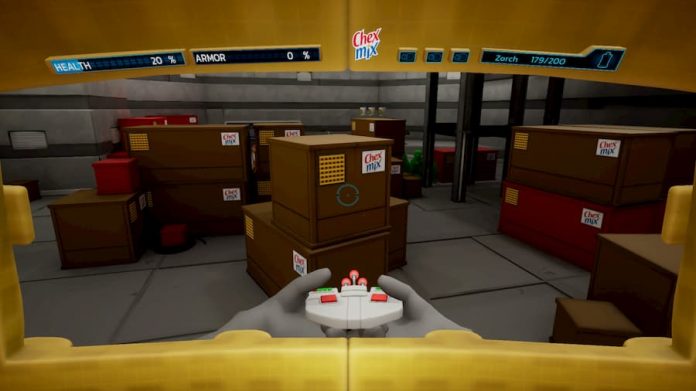 Last week, the UK had a game from NatWest bank. Now there’s a game based on American snack Chex Mix.

Well, Chex Quest isn’t anything new. For those of you who have been around long enough, you may remember it when it first released way back in 1996. For some reason, someone has decided that now, 24 years later, is a good time to remaster it. And So Chex Quest HD is an actual thing that’s available now.

I’ve played it, and I wish I could tell you that it’s the best free-to-play game you’ll ever play. It’s not. It’s… kind of awful, but there’s some charm in its retro stylings. Back in 1996, Chex Quest was designed to a non-violent replacement of Doom. It’s a first-person shooter, but it’s missing the blood and gore that Doom is most known for. Instead, you’re equipped with a zapper and your foes are weird, blobby aliens. Zap them enough times and they’ll simply disappear.

The HD remastering means that Chex Quest looks a lot better than you remember it. If you remember it at all, that is. It’s still not a looker, but it has a certain charm. You’ll explore areas, zapping aliens as you go, finding keys to let you access new areas, and so on and so forth. There’s some light puzzle solving involved, in as far as flipping some switches and activating moving platforms. But for the most part, Chex Quest is a rather brainless activity.

That’s not to say there’s no fun involved, though. If you feel very strongly about Chex Mix (I won’t judge), then you’ll get a kick out of seeing classic brand characters brought to life. And seeing the logo plastered all over the place will probably make you hungry after a while. Which is, presumably, the entire goal of the whole operation: buying special bags of Chex Mix will net you codes for the game to unlock new characters.

A free game is a free game. Marketing or not, effort has gone into creating this and you can play it in its entirety without paying a penny. It’s not something to scoff at. But in the day and age where stuff like Grand Theft Auto 5 is given away free, it’s harder and harder to find relevance in this sort of offering. Maybe you played the original and you’ll get a nice nostalgic kick. Or maybe you just get a big kick out of the cereal taste that you eat with your hand.

Chex Quest HD is available on Steam now. Check out the trailer below, or visit the official website for more information.